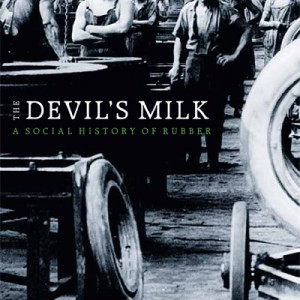 Read this article in the Akron Beach Journal on theater inspired by John Tully‘s The Devil’s Milk: A Social History of Rubber

“Death of a Man chronicles atrocities of rubber’s dark past

I never knew is a common refrain New World Performance Laboratory theater artists are hearing from Akron audience members after open rehearsals of Death of a Man, a new play that brings to life the mutilations and massacres that occurred in the early 1900s during the mad search for rubber in the jungles of the Amazon.

The one-man show, which is still in development, is conceived and performed by Colombian actor Jairo Cuesta, co-artistic director of NWPL. It is the first part of the company’s The Devil’s Milk Trilogy, a long-term project funded by a $15,000 Knight Foundation grant that explores Akron’s relationship with rubber….”

The entire article appears in Ohio.com