Joshua Tree National Park is in southern California, east of Palm Springs and just south of the small desert town of Twentynine Palms. The park, which was nearly empty during our visit, perhaps due to the extreme heat (100 degrees in early May), sits on the boundary between the Colorado and Mojave deserts. The former is at a somewhat lower elevation than the latter, and this makes a great deal of difference in terms of terrain, plant life, and temperature. The Colorado is a classic barren-looking desert, hot and dry and seemingly inhospitable to life. However, there is plenty of life if you look for it. Besides the creosote bushes, there are gardens of cholla cactus, which lie in wait to stick to the unwary visitor’s skin, and patches of ocotillo plants, rising languidly and unsteadily toward the sky and tipped with red flowers in the spring. Other cactus plants, such as the beaver tail, produce brilliant and beautiful flowers, also in the spring. Some of these seem to have a sexual essence, alive and anomalous in such an arid country. 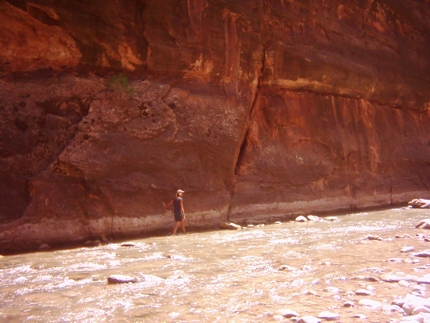 At the southern end of the park, the Colorado desert boasts an oasis with cottonwood trees, palms, and many other trees and plants which are home to a large number of bird species. We took a hike here, scrambling up the rocks to Mastodon Peak and a view of the Salton Sea, California’s largest body of water. Along the way, we looked for abandoned gold mines and saw holes bored in large rocks by ancient people who used them as mortars for grinding seeds and nuts. In the Mojave Desert, which traverses the eastern part of the park and is higher and slightly cooler, there are thousands of Joshua trees. These odd-looking plants are neither trees nor cacti but a variety of yucca plant. They were named by Mormon pioneers who thought that they looked like the prophet Joshua raising his arms up to heaven. [Note: the modern history of the west cannot be understood without grasping the crucial role played by the Latter Day Saints. Mormonism is perhaps the world’s fastest growing religion, with more than 11 million members worldwide. Some scholars believe that it is on the cusp of becoming the first major world religion since Islam. If it does, it will be the first such religion to originate in the Americas. I will have more to say about the Mormons later.]

In the Mojave desert region of the park, we drove up to Keys View, the highest point in Joshua Tree accessible by car. From there the lights of Palm Springs are visible, as is the San Andreas fault. On a clear day, it is possible to see mountains in Mexico. One evening we sped there under a blood-red setting sun which illuminated the sky with an ethereal glow and gave the “jumbo rocks” and monoliths for which the park is famous an altogether fabulous look. Not long after the sun set over the San Bernardino mountains, an enormous yellow full moon showed its face in the opposite direction, so bright that we drove without lights. Soon the sky was spattered with stars, showing off in a sky unblemished by city lights. The air was cool enough to make us don jackets when we got out of the car to look at a grove of Joshua trees silently praying in the moonlight.

The desert appears to be a lonely, peaceful, and natural place, somewhere to breathe clean air and forget about the “civilized” city world that seems a million miles away. Nearly all of the southwest and much of the west as a whole are comprised of deserts, not particularly suitable for human habitation with their nearly waterless open wastelands, mesas, and canyons. In 2002 it rained less than two inches in much of Joshua Tree. When rain does come, it does so in violent torrents, spawning cruel flash floods which push walls of water, trees, and rocks down the washes (arroyos in Spanish).

But if the desert appears natural, appearances are deceiving. If we mean by natural places those without a human presence, then there are no such places. All of nature, even the most remote regions of the earth, exists within a human social context. Humans have lived in the deserts of the West for thousands of years and have changed it dramatically. However, there are striking differences between modern (by which I mean capitalist) and ancient human interactions with the desert. Ancient peoples and their contemporary descendants, such as the Navajo, have taken the desert as it was and tried to live in harmony with it. Here is how Willa Cather describes this relationship in Death Comes for the Archbishop (this passage was marked by Everett Reuss):

It was the Indian manner to vanish into the landscape, not to stand out against it….[The Indians] seemed to have none of the European’s desire to “master” nature, to arrange and re-create. They spent their ingenuity in the other direction; in accommodating themselves to the scene in which they found themselves. This was not so much from indolence…as from an inherited caution and respect. It was as if the great country were asleep, and they wished to carry on their lives without awakening it; or as if the spirits of earth and air and water were things not to antagonize and arouse. When they hunted, it was with the same discretion; an Indian hunt was never a slaughter. They ravaged neither the rivers nor the forest, and if they irrigated, they took as little water as would serve their needs. The land and all that it bore they treated with consideration; not attempting to improve it, they never desecrated it.

In capitalist society, nearly the exact opposite occurs. The desert and all that is in it are commodified as rapidly as possible. Lands are stolen from the Indians so that they can be “improved” by inefficient and costly irrigated farming and by cattle ranching which pollutes the water supply and denudes the vegetation. Today superhighways crisscross the deserts; mines despoil the mountains; dams flood the canyons; and military outposts and the megalopolises of Phoenix, Las Vegas, and Los Angeles desecrate some of the most beautiful places on earth. From Keys View in Joshua Tree, pollution from Los Angeles, brown and deadly, is clearly visible coming through a pass in the mountains. Yet city leaders tell us that these cities must continue to grow or they will die. The truth is that it will be the deserts which die. And humanity will be the biggest loser.

We drove out of Twentynine Palms after our visit to Joshua Tree, north through the Mojave Desert on a two-lane highway. We wondered what kind of people lived in the small and humble shacks we saw far out into the empty landscape on both sides of the road. As we came into Arizona we saw a salt mine and an abandoned town (Amboy) for sale. The town’s post office was still open, probably for the salt mine workers.

As we drove, I thought about how lucky we were to be able to travel freely, with no particular destination and no timetable. Long road trips have an almost iconic significance in the United States. This is a very large country with an extraordinarily diverse and in many places unique topography. To know it, we have to see it, and to see it, we have to get in our cars and on our feet and travel. And this is just what we were doing. I was so glad that I had quit teaching. For how can going through the motions after thirty-two years of teaching students not particularly interested in learning compare with a blood-red sun and a luminous moon hanging in the sky, almost close enough to touch, over the wondrous desert?