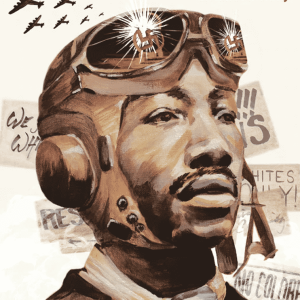 In 1948, leftist filmmaker Leo Hurwitz directed a documentary whose title summed up the uncertainty of its moment: for America’s antifascists, the end of the Second World War was a Strange Victory indeed. Using newsreels from the war’s front lines, footage shot in the U.S., and provocative narration and editing, Hurwitz’s film grasps the nettle of the tumultuous decade that was the 1940s by dissecting a cruel irony. The United States had expended copious amounts of blood and treasure to defeat fascism and its close comrade, unalloyed racism and bigotry, while fighting with a Jim Crow army, the inevitable result of an existing apartheid society. Victory can’t be complete, the film’s narrator observes, “with the ideas of the loser still active in the land of the winner.”

The radicalism of Strange Victory comes out of the Popular Front, an international movement that exercised a powerful influence on U.S. culture in the 1930s and ’40s. Initiated during the Great Depression and often led by the U.S. Communist Party, the Popular Front grouped under one umbrella radical and liberal forces animated by antifascism. Grounded in expansive labor-organizing campaigns, it fought against Jim Crow in the South, ran solidarity campaigns for international causes like Republican Spain, and lent grassroots support to the programs of the New Deal. At the peak of its strength, the Popular Front gave rise to a trend that did not outlast the end of World War II: Communists, liberals, and even some centrists acting in concert, especially on an antifascist, pro-labor, antiracist basis…..

“All men are created unequal” is a phrase the film correctly attributes to Nazi Berlin. This embedded inequality is juxtaposed with what the U.S. purported to embody, as well as what it actually demonstrated. “All men are created equal” was Washington’s mantra, even while U.S. apartheid reigned supreme as the law of the land.

Strange Victory was financed and produced by Barney Rosset, who would go on to make his mark in publishing by bringing out works by Jack Kerouac and other Beats, as well as Malcolm X. Born into a wealthy Chicago family, Rosset was politically active from a young age, agitating on behalf of the Spanish Republicans and picketing the local release of Gone with the Wind. He enlisted in the Army in 1942, and was sent to China in the Signal Corps. From there, he wrote a letter to his parents that would lay out the kernel of Strange Victory’s warning: “The political situation all over the world, but particularly in the Far East, is pretty discouraging because the Americans, British, and French seem to have taken up the same policies that the Japs [sic] and the Germans left off with.” Back in the U.S., he initiated a brief stint in the Communist Party that coincided with the making of the film. He was only twenty-six when Strange Victory was released, and though its impact would be eclipsed by his publishing career, it was the first indication that he was a visionary, well ahead of his times.

Leo Hurwitz, the prime auteur of this work, was born in 1909 in Brooklyn and was of Russian Jewish ancestry. As a child he became infatuated with the relatively new medium that was motion pictures and took that interest with him to Harvard, where he did not elude anti-Semitism. As a young adult he gravitated toward a New York–based popular front group called the Workers Film and Photo League, where he developed many cinematic techniques on display in Strange Victory, including adroit editing—especially quick cutting from one scene to another, inspired by Soviet filmmaking—and the knowing deployment of montage, creating a form of documentary narrative whose influence has yet to dissipate.

Hurwitz’s early work addressed the profoundest political matters of the 1930s and early 1940s. He served as a producer on 1937’s Heart of Spain, a report on the Spanish Civil War. And the most ambitious project of his career, the labor epic Native Land, surveyed the upheaval of class struggle in the U.S. that led to the organizing of labor. Codirected with the photographer Paul Strand, that film mixes documentary with dramatizations and stirring narration by Paul Robeson in order to capture the spirit of the Popular Front…..

Strikingly, Strange Victory spends considerable time detailing the dearth of African Americans in certain occupations and professions: medicine, engineering, railway conductors, symphony-orchestra instrumentalists, stenographers, etc. The tragic irony of Strange Victory is that, almost seventy-five years later, this lamentable state of affairs has hardly changed. The film’s warning remains clear: to the extent that a stern and forceful struggle against racism and anti-Semitism is delayed or short-circuited, we shall find this nation on a trajectory that brought so much misery and devastation not only to Europe but to the world at large.

This message is not delivered without hope though. Another revealing aspect of Strange Victory is how many infants are shown, the takeaway being not just the obvious: that these girls and boys are the future. Hurwitz also stresses that they come into the world “unprogrammed” with racism and anti-Semitism. Alien ideologies have to be implanted, which opens up room for agency on the part of the antifascist audience. This festering problem, Hurwitz suggests, is reversible with adept organizing and sound education.

During the Red Scare, a telling phrase came to describe some who had been clamoring for more demonstrative anti-Hitler manifestations before the U.S. entered the war in late 1941: “premature antifascists.” Outside a narrow wartime period, antifascist convictions were now seen from a postwar vantage as suspect, evidence of Communist loyalty. Now forgotten is that there was an offshoot of this tendency: one whose adherents we might call “premature antiracists.” For keep in mind that, although an apparent antiracist consensus—at least in the most rudimentary sense—has emerged since, this consensus hardly obtained in 1948 when this worthy documentary was produced. Though the United States took up the antifascist cause for a limited time when it went to war, it has never fully committed itself to antiracism, and the movement has remained marginalized as “premature” by the powers that be. In other words, Strange Victory was—and still is—visionary, refusing to surrender to U.S. apartheid but, instead, seeking to undermine it.

See the article in full at Criterion