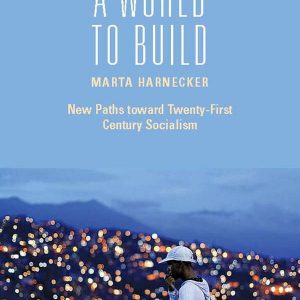 We’re pleased to share the news that MR Press author and Monthly Review contributor Marta Harnecker has won the 2013 Liberator’s Prize for Critical Thought. MR Press will publish the English edition of her prize-winning book, A World to Build: New Paths toward Twenty-first Century Socialism, in November 2014. The announcement below was published by the Venezuelan news agency Agencia Venezolana de Noticias and was translated by Fred Fuentes.

Caracas, June 27, AVN – Chilean sociologist and journalist, Marta Harnecker, has been awarded the 2013 Liberator’s Prize for Critical Thought for her book “A World to Build (New Paths),” according to an announcement made by the judging panel at the National Experimental University of the Arts last Friday.

According to the verdict read out by the judging panel for this award created by Commandante Hugo Chávez in 2005, the book received the prize based on the “originality of the ideas presented in the book, relevance of its content for the current period and the significance of the issues it addressed with a critical and, at the same time, proactive approach.”

Carmen Bohórquez, a promoter of the prize, said that among the key features of the book that deemed it worthy of this recognition were its “clear language, innovative propositions for the development of a transformational social action and, above all, the proposal to build a new state from the grassroots, beginning with communal organization.”

For his part, Minister of Culture Fidel Barbarito said the award was further evidence of the willingness of the Bolivarian government to generate spaces for critical thought, and stimulate the creation and establishment of concrete structures for promoting investigation across the globe.

“This has become an award that pays tribute to an emancipatory, anti-hegemonic thought that contributes to building an alternative cultural, social, political and economic model,” he said.

Along with the main award, five honorary mentions were given to the following books: “Contemporary Capitalism” by Samir Amin (Egypt), “Treatise on methods of analysis of economic systems, capitalist globalization and systemic crisis” by Luciano Vasapoli (Italy), “Fetishism and power of Karl Marx’s thought” by Nestor Kohan (Argentina), “The Seven Sins of Hugo Chavez” by Michel Collon (Belgium) and “Media Terrorism: the social construction of fear in Mexico by Carlos Fazio (Uruguay).

The winner of the Liberator’s Prize for Critical Thought is awarded US$150,000, a trophy, a certificate and their book is to be published by the Office of Culture.

“The award will be presented on July 24, on the birthday of the Liberator, Simon Bolivar, and will be handed over by President Nicolas Maduro,” said Bohórquez, who is also the coordinator of the Network of Intellectuals and Artists in Defense of Humanity.

A statement by Carmen Bohórquez about A World to Build: New Paths toward Twenty-first Century Socialism:

Without a doubt, your book “A World to Build (New Paths)” brings together in a magisterial way what President Chávez so often asked of intellectuals: a theoretical reflection rooted in the problems and struggles of the people; one that accompanies their struggles and provides them with weapons to help clarify their problems, resolve them and advance along the path of building a socialist society. Therefore, on behalf of the Venezuelan people that are immersed in such a struggle, we thank you for your illuminating contributions. We congratulate you and express our gratitude for this extraordinary text that, as you say, provides an insight into the other Marta, one schooled in a lifetime of living together with the people and their struggles.