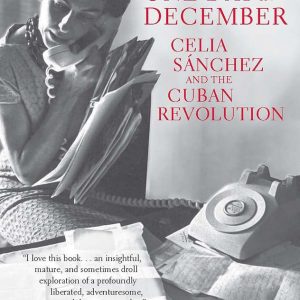 "I love this book. Biographer Nancy Stout is to be congratulated for her insightful, mature and sometimes droll exploration of a profoundly liberated, adventuresome and driven personality."

Nancy Stout, author of One Day in December: Celia Sánchez and the Cuban Revolution, will be speaking in the Minneapolis area, at the invitation of the Minnesota Cuba Committee.

I love this book. Biographer Nancy Stout is to be congratulated for her insightful, mature and sometimes droll exploration of a profoundly liberated, adventuresome and driven personality. I love the life of Celia Sánchez, a life that was singular, sui generis, and true to its time of revolution and change in Cuban society, but also archetypal in its impact and relevance to all times of social struggle and revolt, including this one.

Nancy Stout’s One Day in December, in addition to being a penetrating and startling biography, is a new generation’s view into a world previous generations have been locked out of with words like: “dictator,” “communist,” “anti-American,” and “communist sympathizer/traitor.” As we move into an era of multiculturalism, an era which continues to upset old racial paradigms, and an era of interconnectivity and globalism from which there is no turning back, Nancy Stout’s One Day in December takes on the importance of the work of Arundhati Roy or Noam Chomsky in its insistence on looking at facts rather than self serving capitalist and neocolonialist myth. And One Day in December is also a damn good read about a passionate, sensuous, and brilliant woman!

—Sapphire, author of Push and The Kid

Engrossing, endearing, and eloquent, this sympathetic and superbly crafted portrait of the ‘True Flower of the Revolution’ unfolds in magnificent detail. Nancy Stout leaves us breathless in admiration for this fearless revolutionary—a brilliant organizer, recruiter, and Fidel Castro’s most precious aide. So intimate is Stout’s well-informed tour de force that the description of Sánchez’s death brings the reader to tears, inspired by a deep sense of love and loss.

Nancy Stout has accomplished a genuine tour de force with One Day in December. In this riveting and eloquent portrait, Celia Sánchez finally emerges as a major star in Cuba’s revolutionary drama: a political animal, a management consultant, a historian, and of course, a confidante to Fidel Castro. Thrust into the arena of clandestine politics in the 1950s, Celia spent the next two decades of her life helping to institutionalize the Cuban revolution. Her legacy, especially for women and girls’ education and health, and as the chief archivist of the insurgency, comes alive in Stout’s exhaustively researched biography.

This excellent book tells us about Celia Sánchez, an early leader of the Cuban Revolution and a fascinating character. From Oriente province, she helped organize the 26th of July forces there and plan Fidel’s landing in January of 1956. She soon joined him in the mountains and became not only a leader of the Revolution but his ‘closest companion.’ That they were intimate seems clear but it was a sui generis relationship. As Nancy Stout suggests, ‘he was free to come and go.’ And he certainly had relationships with other women. As Stout movingly describes her, Celia was totally devoted to Fidel and to the Cuban Revolution. And she loved and was loved by the Cuban people. I was in Havana at the time of her death in January of 1980 and well remember the deep sadness it occasioned.

In this impressive biography Stout utilizes interviews, Cuban archives (to which she was granted special access by Castro himself), letters, and other documents to provide an accurate portrait of Sanchez, who ran the planning organization of the revolution after the death of Pais in 1957… Stout’s biography tells her story as well as offering insights into other revolutionaries and their contributions… Highly recommended for readers and scholars of Cuban history.

Nancy Stout is a writer and photographer living in New York City, currently employed by Fordham University as a Reference Librarian. Her books include Great American Thoroughbred Racetracks, Homestretch, The West Side YMCA: A Social and Architectural Retrospective, Havana/La Habana (with architect Jorge Rigau, who wrote the text), and Habanos: the Story of the Havana Cigar (author and photographer).

A Freedom Budget for All Americans reviewed in Library Journal
Henry A. Giroux addresses the Ontario Common Front Assembly [VIDEO]