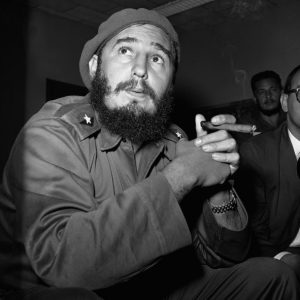 From the International Committee for Peace, Justice and Dignity

“On the occasion of the demise of the Commander in Chief of the Cuban Revolution, Fidel Castro Ruz, the Council of State of the Republic of Cuba declares nine days of National Mourning, as from the 06:00 hrs. of November 26 th, until the 12:00 hrs. of December 4th, 2016. For as long as the National Mourning is in place, public activities and shows shall not be held, the national flag shall be flown at half-staff in public buildings and military facilities. The radio and television shall broadcast informative, patriotic and historic programs.”

—Council of State of the Republic of Cuba

Press release by the Organizing Commission

“The Organizing Commission of the Central Committee of the Party, the State and the Government for the funeral honors of Commander in Chief Fidel Castro Ruz, informs the population that as from November 28th, from 09:00 until the 22:00 hrs., in the José Martí Memorial, the population of the capital city will be able to pay a befitting tribute to their leader, which will extend until November 29th, from 09:00 until 12:00 hrs.

On November 28th and 29th, from 09:00 until 22:00 hrs., in the locations that will be timely informed in each locality, including the capital city, all Cubans will have the possibility to pay tribute and sign a solemn oath to fulfill the concept of Revolution, expressed by our historic leader on May 1st, 2000, as an expression of the resolve to continue his ideas and our socialism. On November 29th, at 19:00 hrs., a mass rally will take place at José Martí Revolution Square in the capital city. On the next day, his ashes will be carried following the same itinerary that remembers the Caravan of Freedom of January 1959, until the province of Santiago de Cuba, ending on December 3rd. On this same day, at the 19:00 hrs., a mass rally will take place in Antonio Maceo square. The inhumation ceremony will take place at the 07:00 hrs. on December 4th, at Santa Ifigenia Cemetery. Likewise, our people is advised that the Military Review and march of the combatant people for the 60th Anniversary of the landing of the members of the Granma Yacht expedition, the day of the Revolutionary Armed Forces, is postponed and will be held on January 2nd, 2017.”

All of Fidel’s “reflections” are archived here at monthlyreview.org.