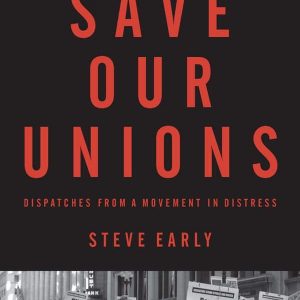 "This book shows what it takes to defend democracy, workers rights, and social justice unionism."

Book Review: Save Our Unions: Dispatches from a Movement in Distress by Steve Early

This book brings together recent essays and reporting by labour journalist Steve Early. The author aims to illuminate the challenges facing U.S. workers, whether they’re trying to democratise their union, win a strike, defend past contract gains, or bargain with management for the first time. Melanie Simms writes that the insider perspective offered in this book will add to our understanding of how and why unions have contributed to the creation of specific patterns of disadvantage and exclusion for workers and for citizens.

Save Our Unions: Dispatches from a Movement in Distress. Steve Early. Monthly Review Press. February 2014.

Steve Early is a well-known commentator on the complex world of US trade unionism. His analyses are often provocative and always well-informed as he has worked in and around the US labour movement for more than 40 years. This is his third book since he retired from the Communication Workers of America (CWA) union. Evidently he is a man who intends to use the freedom of retirement to stir up debate.

As the subtitle suggests, the book brings together a series of previous pieces he has written for a range of audiences. Typically, they are from the journals, newspapers and websites that cover US labour issues: Labor Notes, Huffington Post, Working In These Times etc. And the tone of the dispatches taken as a whole is distressing. The reader is undoubtedly left with a strong view that the US labour movement is in very deep trouble and that strategies to plot a future course have been ill-fated.

Early is passionate about working people having the opportunity not only to have a say in their working lives, but to act as a countervailing power to corporate America. Readers unfamiliar with how deeply entrenched the interests of corporate America are within political institutions only have to look at the recent intervention of the Republicans in the vote of workers at Volkswagen’s plant in Chattanooga, Tennessee. There, mangers were keen to allow the United Auto Workers (UAW) representation rights. Senior Republican politicians and lawmakers made it very clear that, in their view, such a move would harm job creation and workers subsequently voted against the proposal on a narrow margin. The ballot is currently being appealed, but the point is clear: anti-union voices are deeply embedded in political institutions and they carry a lot of weight…

Read the entire review in the LSE Review of Books