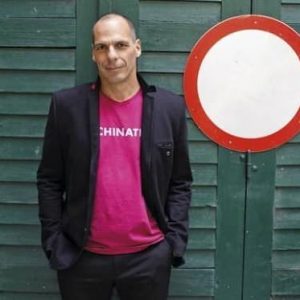 On January 25, 2015, the left-wing party, SYRIZA, won a stunning victory in Greece’s national elections. The new government, which says it intends to end the debilitating austerity measures forced upon Greece by the European Union, announced that the new Finance Minister is Yanis Varoufakis, a noted economist and good friend of Monthly Review (and MR author). We wish him well and trust that, unlike most economists, he will put his superb skills to work on behalf of the long-suffering Greek people and, indeed, all those oppressed by the policies imposed by the ruling classes of the European Union and United States.

Subscribers with access to the Monthly Review archives can read Yanis Varoufakis’s 2003 article (with Joseph Halevi), “The Global Minotaur.”

Or, read Michael D. Yates’s review of Varoufakis’s book, Modern Political Economics: Making Sense of the Post-2008 World, in his 2011 review-essay “The Emperor Has No Clothes But Still He Rules.”

Additionally, you can read several articles by Varoufakis on MRZine, below, or check out his personal blog.

“First as History, Then as Farce: The Euro Crisis Revisited”

“A Modest Proposal for Overcoming the Euro Crisis”