Online version of the Polylux Marx slides are available here

The Great Recession, triggered by the collapse of financial markets in 2008, struck with such ferocity that millions of people began to question the rationality of our capitalist economic system. And as scholars, journalists, and activists tried to comprehend what was happening, they were forced to look deeply into the nature of capitalism—inevitably leading them to the work of Karl Marx. Now, Marx is enjoying a worldwide rediscovery and resurrection, and his masterwork, Capital , has found its way back into college classrooms, labor unions, the Occupy movement, study groups, and into the hands of disillusioned young people.

Reading Capital can be a daunting endeavor and most readers need guidance when tackling this complex work. PolyluxMarx provides such guidance. Developed by scholars and political activists associated with the Rosa Luxemburg Stiftung (Foundation), one of the leading political education institutions in Germany, this book has been field tested with groups studying Marx’s masterpiece over several years. It consists of a large set of PowerPoint presentations, combined with detailed annotations and suggestions for ways to discuss the material. Each page illustrates a central argument from Capital, provides helpful introductory texts, and supplies notes on methodology and teaching tips. PolyluxMarx is an ingeniously devised illustrated workbook that will help readers grasp the key arguments of Capital. It will prove invaluable to the curious reader of all ages, as well as to students, teachers, workers, activists, and study groups. 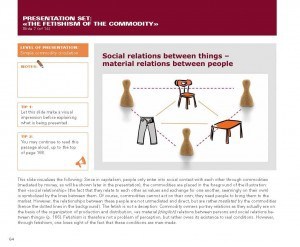 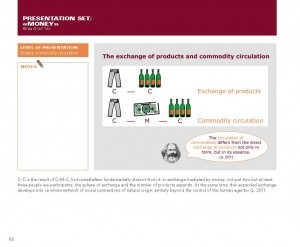 Valeria Bruschi, Antonella Muzzupappa, Sabine Nuss, Anne Stecklner, and Ingo Stützle are prominent German scholars and political activists associated with the Rosa Luxemburg Stiftung. They have developed this book as part of a long-term project of teaching Marx’s Capital. Translator Alexander Locascio was previously active in the U.S. labor movement and now lives in Berlin.