Dear Reader, we make this and other articles available for free online to serve those unable to afford or access the print edition of Monthly Review. If you read the magazine online and can afford a print subscription, we hope you will consider purchasing one. Please visit the MR store for subscription options. Thank you very much. —Eds.
Notes from the Editors
by The Editors
(Jun 01, 2022)
Topics: Capitalism Climate Change Ecology Political Economy Places: Global 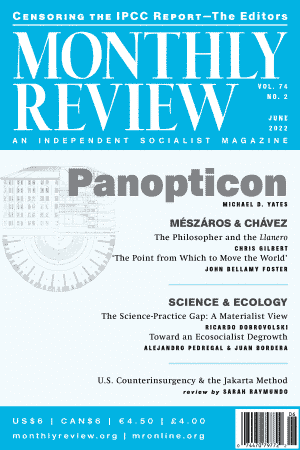 Time is running out for the world to carry out the social transformations necessary to avert irreversible climate catastrophe, keeping the increase in global average temperatures below 1.5°C (or below 2°C). The most optimistic scenario currently provided by the UN Intergovernmental Panel on Climate Change (IPCC) describes a pathway in which the increase in temperature will not rise to 1.5°C until 2040, peaking at 1.6°C, and then falling back to 1.4°C by the end of this century. But to achieve this will require revolutionary scale transformational change in global social relations affecting the human relation to the climate and the planetary environment as a whole.

This was the clear message of the original draft by scientists of the most important climate change report to date: the Working Group III report on Mitigation of Climate Change of the IPCC’s Sixth Assessment Report (AR6), authored by 278 scientists from sixty-five countries, and drawing on some 18,000 scientific studies. The scientific report was completed in August 2021. The final report was then published, following alterations by governments of The Summary for Policymakers (SPM), in April 2022. Yet, the final governmental-drafted SPM—the only part of the climate change report that is widely read and that affects policy—negated almost all of what scientists themselves had previously agreed on with respect to mitigation in their original draft of the SPM, creating a sharp divergence between this and the rest of the 2,900-page report.

It is crucial to understand that, in the IPCC process, the lead authors of the report arrive at a scientific consensus with respect to the entire climate report, including the all-important SPM. But, before the IPCC report is published, the SPM requires a second, supposedly higher consensus, known as the governmental consensus, in which governments (with corporate lobbyists looking over their shoulders) decide on the final SPM line by line, rewriting what the scientists provided. This means that the published SPM is no longer entirely the result of scientific deliberations but is negotiated by political-economic interests. Governmental actors, however, are not able to alter the climate report as a whole, only the SPM (Juan Bordera, “How the Corporate Interests and Political Elites Watered Down the World’s Most Important Climate Report,” MR Online, April 27, 2022). The justification for the twofold consensus process is that the governmental consensus is simply meant to modify the scientific consensus to account for political realities and in order to forge an international agreement. In the case of the Mitigation report for AR6, however, the governmental consensus took an extreme form that in effect entirely erased the scientific consensus that had preceded it.

Alerted early on to what was likely to transpire, Scientist Rebellion (linked to Extinction Rebellion) leaked the Working Group III document to the press in August 2021 (though most of the mainstream press refused to make mention of the leaked report), which was then published on MR Online in September. Reading the leaked scientific summary and the governmental summary that displaced it, side by side, demonstrates that they are two entirely different SPMs, with the governmental consensus SPM annulling the scientific consensus SPM, in effect censoring and removing the most important conclusions of the scientists who had authored the overall Working Group III Mitigation report (“Advance Release! The Leaked IPCC Reports,” MR Online, September 8, 2021).

As early as October 2021, the BBC, relying on documents it had obtained from the 2021 UN Climate Change Conference then taking place, described how various governments were going to war on the scientific consensus in the SPM of the Working Group III Mitigation report. Saudi Arabia, Argentina, Australia, India, Japan, and Norway, together with the Organization of the Petroleum Exporting Countries, were demanding the removal of parts of the SPM that had insisted on rapid reductions in fossil fuel energy. Australia lobbied against statements in the SPM that indicated that coal-fired plants need to be eliminated while protesting references to fossil fuel lobbyists in the reports. At the same time, most of these countries were seeking to reverse the science in the SPM pointing to the non-viability of carbon capture and sequestration. Saudi Arabia objected to phrases in the report pointing to the need for “accelerated mitigation” of climate change. Brazil and Argentina insisted on censoring the scientific report on the subject of decreasing meat-based diets. Switzerland sought to remove sentences in the scientific report pointing to the need of developing countries to receive financing from rich countries in order to meet the targets for emission reductions. India, the Czech Republic, Poland, and Slovakia attacked the scientific consensus for its negative assessment of the role of nuclear power in combating climate change and achieving sustainable development goals (“COP26: Document Leak Reveals Nations Lobbying to Change Key Climate Report,” BBC, October 21, 2021). All of these countries were successful in cutting out entirely or watering down what they regarded as the objectionable elements in the published version of the SPM, including references to “accelerated mitigation,” which no longer appears.

The numerous changes to the SPM for the 2022 IPCC Mitigation report, which was altered in almost every line, dramatically highlight the role of vested interests in censoring the science. A number of examples will suffice:

With respect to specific social-ecological measures advanced by the scientific consensus report, the deletions were equally dramatic:

Upon the release of the IPCC Working Group III Mitigation report, UN general secretary António Guterres, in a radical departure from the norm, issued a strong statement that the climate change report itself was “a file of shame” and revealed “a litany of broken climate promises” by the “vested interests” who were putting humanity “firmly on track towards an unlivable world.” Although Guterres did not make it entirely explicit, nevertheless it was clear from his choice of words and the occasion that his objections were in large part a response to the mangling of the original SPM written by climate scientists. “Some government leaders,” he stated, were “lying,” “saying one thing—but doing another,” continuing to promote “investment in new fossil fuel infrastructure,” thereby perpetuating “moral and economic madness.” In a statement that read like a defense of the annihilated scientific consensus SPM, the UN general secretary declared, “climate activists are sometimes depicted as dangerous radicals,” but in his view “the truly dangerous radicals are the countries that are increasing the production of fossil fuels” (“Mitigation of Climate Change Report 2022: ‘Litany of Broken Climate Promises’—UN Chief,” United Nations April 5, 2022).

The effective eradication of the entire scientific consensus in the published SPM of the April 2022 IPCC Mitigation report means the published SPM is in stark contradiction with various chapters of the Mitigation report, which still convey the underlying scientific consensus on mitigation. Thus, chapter one of the report underscores that some argue that “the character of social and economic development produced by the nature of capitalist society is ultimately unsustainable,” and cites radical, anticapitalist figures such as Jason Hickel and Andreas Malm. The word degrowth appears twenty-eight times in the full report. It is therefore necessary for those seriously concerned about the current climate emergency to rely primarily on the scientific report—that is, the published chapters of the report plus the leaked SPM, representing the actual scientific consensus. In contrast, the published, government (and corporation) redacted SPM should be entirely dismissed as the consensus of capital, and the betrayal of science, reason, and humanity. The science is clear. Without radical transformative social change that breaks with the logic of the existing mode of production and that points to a world of sustainable human development, there will be no future for humanity.

Panopticon
Ecology and the Future of History