John Bellamy Foster is the editor of MR and a professor of sociology at the University of Oregon. He has written extensively on political economy, ecology, and Marxism.

Brett Clark is the associate editor of MR and a professor of sociology at the University of Utah.

Michael D. Yates was the associate editor of MR from 2001 to 2018 and is the editorial director of Monthly Review Press. An expert on labor and economics, he has taught in labor studies programs at schools across the United States, including Penn State, Cornell, and Indiana University. 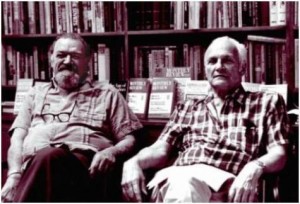 Harry Magdoff (1913–2006) was co-editor of Monthly Review from 1969 until his death. Before joining the magazine, he served as a chief economist at the U.S. Department of Commerce during the Second World War, and later worked as a special assistant to Secretary of Commerce Henry Wallace. His economic analyses of imperialism have been widely influential.

Paul M. Sweezy (1910–2004) co-founded MR in 1949 with Leo Huberman (1903–1968). A professor of economics at Harvard and later a visiting professor and lecturer at many universities in the United States and abroad, Sweezy was the author of numerous books on economics and politics, including A Theory of Capitalist Development (1942) and, with Paul A. Baran, Monopoly Capital (1966).