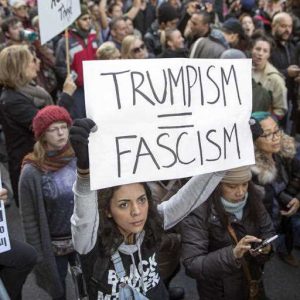 Is Trump a neofascist? Analysts on the left, such as Cornel West, Noam Chomsky, and Judith Butler think he is. But mainstream liberal commentators refuse to associate the Trump phenomena with fascism, calling him a “rightwing populist.” Does it really matter what Trump is called? The poet, playwright, and political thinker, Bertolt Brecht, asked in 1935: “How can anyone tell the truth about fascism, unless he’s willing to speak out against capitalism, which brings it forth?” Hear Heidi Boghosian and Michael Steven Smith speak with John Bellamy Foster, editor of Monthly Review, who wrote the review of the month, “This Is Not Populism” in the June 2017 issue.

Listen below, or go to Law and Disorder radio