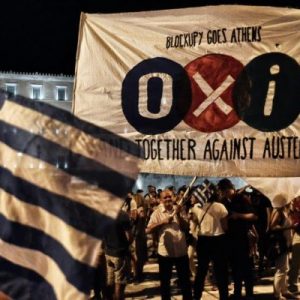 Reviewed by Nikos Lountos for the Irish Marxist Review

Helena Sheehan has been reporting and writing about Greece and about the Greek Left for quite a long time. Having been politically associated with Syriza (Coalition of the Radical Left), she became active, between other things, in the movement of solidarity with the Greek resistance, before and after the electoral victory of the Left in the general elections of January 2015.

This book is an honest account of how she lived and analysed the period of the surge of Syriza, starting from 2012, passing through the moment of the big hopes after the elections, the negotiations of the new government with the Troika, until the compromise and the final capitulation of Syriza’s leadership after the referendum of the 5th of July 2015.

The book is written in chronological order and some parts have a diary-like format and this makes its honesty even more apparent. We don’t see the reality in retrospect but follow the ups and downs as in a tragedy where only the spectator but none of the heroes or villains knows the end.

This is important because Helena Sheehan was not the only one who went through this roller coaster of emotions. Millions of working class people in Greece and abroad followed the same path, hoping that January 2015 would be a turning point against austerity across Europe. The international movement of solidarity that erupted back then was not out of sympathy for something happening far away, but with a feeling of a common struggle and an enthusiasm that a mass Left alternative could come back to the fore in every country:

As I saw it at the end of 2012, Greece was the crucible, where the best and worst of our civilization were in high-energy collision with each other. This was not some local battle. These cuts to pay, pensions, and public services, their privatization of public property, this redistribution of wealth from below and above: these were not temporary contingent measures […]

Greece showed where the process was going, but it also offered an alternative: an example of critique, resistance, and preparation for reconstruction. We needed to stand with them for their sake as well as for ours. (p. 58)

Sheehan is also very honest in explaining her own limitations in seeing the disaster coming. Quite a few times she pauses to say:

I never expected anything as awful as what actually happened (p.112)

I accepted this, more because I didn’t want to abandon hope so soon than for any other reason. (p. 113)

Each one of us may have been more or less surprised or shocked about the sudden turning of the massive ‘Oxi’ (No) vote of the referendum into a clear Yes to the Troika. But, this makes it even more crucial to enter into the debate of what really led to this defeat. This debate has advanced in Greece during the last two years. My problem with Sheehan’s book is that it doesn’t give space to these arguments and so it doesn’t help the reader cope with the main questions: Why things went the way they went? What could we have done and what should we do now?

This can end in a circular logic: Things went wrong because Syriza’s leadership capitulated. Yes, but why did they capitulate? Sheehan is convinced that Syriza’s strategy was  correct but something went wrong, thus she doesn’t open at all the argument about strategy. Actually, more disappointing is that she remains dismissive of the voices arguing for a different strategy, lumping them up as those who were for ‘insurrection’or were just dreaming of repeating October 1917:

[…] it was time for the left to recompose, to transcend both the bankrupt reformism of social democracy and the deluded vanguardism of those still dreaming of storming the  Winter Palace. (p. 33)

But the debate was never that abstract. Those of us who argued that Syriza’s strategy would fail never stayed out of the real battles, nor abstained on the dilemmas posed by the real events. Let me quote from the editorial in ‘Workers Solidarity’ (the newspaper of SEK, the Greek SWP, and one of the two main newspapers associated with the anti-capitalist front ANTARSYA), printed three days before the 20th of February agreement:

The EU directorates demand from SYRIZA to sign that it will take back its promises […] not only to surrender on writing down the debt, but on giving back their jobs to the people who lost them; they want SYRIZA to go one privatising and not renationalise the ports, the airports and the Power Company, they want more cuts instead of raising the pensions etc.

The answer to this demand cannot be steps back in order to reach a compromise. Now is the moment of rupture with the blackmailers […] Stop paying and unilateral cancel the debt, nationalise the banks and get out of the euro zone and the EU. This is a ‘group of measures’ that shuts the door to the blackmailers and opens the way for the workers to take back everything that has been stolen from them.

A rupture like this will not come just by waiting in front of our TVs to see what will happen in the next Eurogroup meeting. It will come through the action of all sectors of the working class that have fought against all this dispossession and now demand justice: it will come through the fight of the workers of ERT who are once again out in the street,  with the port workers whose federation announced it doesn’t accept the sell out, with the revolt of the migrant prisoners who demand that the Amygdaleza prison is shut, and with the action of the contract workers in Salonica who have relaunched a ‘Centre of Struggle’.

With each one of these steps we build the continuity of the working class movement that Shauble wants to gag.

This doesn’t seem a sectarian critique, but an effort to engage as many forces possible in a battle that would affect everyone.

So I think that because Sheehan has already decided to leave the strategy question out of the debate, she ends up accepting big chunks of the logic that actually led to the compromise she detests.

For example, she accepts that the government with ANEL (a right wing nationalist party) was a necessary step in order to form a government: ‘This coalition was unfortunate but necessary’ and adds that ‘I did not think that it would constrain them unduly’ (p. 107). She is right that ANEL hasn’t been the force that constrained the government, but she is missing the bigger picture. The leader of Anel, Panos Kammenos, himself has said that this coalition would have happened even if Syriza didn’t need their parliamentary support. The coalition with ANEL was being prepared before the election and it was part and parcel of Syriza’s strategy of appeasing the state and the ruling class. Sheehan mentions all the right wing personalities put by Syriza in the crucial ministries: Defence, Foreign Affairs, Public Order, but this was not at all a coincidence nor a product of a parliamentary manoeuvre.

All this didn’t start with Syriza getting into power. In 2013 when Syriza was still in opposition we had another sold-out ‘referendum’, less-known internationally. The highschool teachers built forces for a tremendous struggle and voted in unprecedented massive meetings for an all-out unlimited strike. It could have been the mother of all struggles against the right-wing government that had already declared the strike illegal. This confidence was of course not unrelated with the opinion polls showing that Syriza was already a majority option for the working class. But, it was the Syriza delegates in the teachers’ unions who voted against the decision of the assemblies that had elected them and blocked the strike. It was a political decision stemming out of a logic that the possible destabilisation caused by a mass strike would put obstacles in the way of the Left coming to power.

So, Sheehan is too innocent when she takes at face value what her friends in the leadership of Syriza were telling her during those years, with lots of references to ‘socialist transformation’ and ‘dual power’.

Of course, there are arguments running through the book that could provide a background for the capitulation, but correctly Sheehan herself is not convinced that this is a definitive answer to the question; that’s why she mentions them mainly as elements that made her doubt at moments.

One argument is the influx of new members and cadre of Syriza coming from Pasok in the years 2012-2014 as a source of the turn to the right. But a reality check shows that it was not these members that made or influenced the crucial decisions. It was the ministers and leaders with the supposedly ‘Marxist background’ who did it. Many of these people who came from Pasok at the end stood to the Left of Syriza’s leadership.

Another argument is to explain the compromises as a, necessary or not, way to win the elections. Even if we accepted this, it doesn’t explain what happens now. Syriza is implementing a hard austerity program that leads it to lose enormous ground in the opinion polls, and actually claims that this program is not imposed by the Troika but it’s the right way forward for saving the economy. So, neither electoral tactics gives us an explanation.

A third option presented by Sheehan is pure naivety on the part of Syriza’s leadership. How come they didn’t know what was obvious to her and many other people?

I always assumed that there was a plan B, or even a plan C or D. It was obvious from the beginning, despite all the gladhanding and confident statements about the goodwill of  our partners’, that the aim of the Eurogroup was to force the retread, capitulation, humiliation, and defeat of the Syriza government.’ (p. 110)

Again, naivety can explain neither the ‘before’ nor what happened after the capitulation. Why did the Syriza leadership turn against the left of the party, after all this European  blackmail had come to the fore? Naivety can be a factor for explaining why the Left in Syriza stayed, accepted and voted for all of these compromises right up to the summer of 2015 when they were expelled, but not for what the leadership did.

One of many vital lessons from the Syriza experience is that government is not power. […] Only the left understands that capitalism is the problem and socialism is the solution, but we have a monumental challenge to convince the ever more disaffected masses of that and to find a way from here to there. […] Reflection on the Syriza story could be an essential element in moving the global narrative onward. (p.228-9)

I couldn’t agree more with the way Sheehan ends her book. Government is not power. Socialism is the solution, but the question is how to find a way from here to there. Syriza has made us clearer that hopes that this can happen through a combination of capturing the State from inside and outside at the same time are doomed to fail, not because of traitors and treachery, but because the capitalist state is not made to be captured by the working-class, not even by a left-wing government, but is made to capture. Even if Sheehan doesn’t herself reach this conclusion in her book, I think the facts that she records can help us do so.