Dear Reader, we make this and other articles available for free online to serve those unable to afford or access the print edition of Monthly Review. If you read the magazine online and can afford a print subscription, we hope you will consider purchasing one. Please visit the MR store for subscription options. Thank you very much. —Eds.
Notes from the Editors
by The Editors
(May 01, 1997)
Topics: Ecology Places: Americas United States 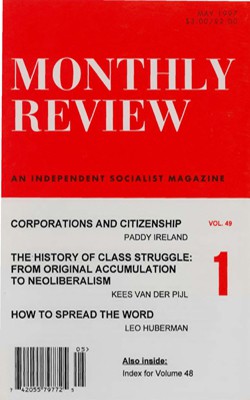 In this space in last summer’s double issue of MR, we directed attention to the work of a worldwatch Institute in Washington, D.C., especially its annual State of the World, the first issue of which was published in 1984. The latest (1997) of these reports came out in February. By now this series is being translated into all the world’s major languages and constitutes what is probably the most comprehensive and available source of information on the global environment.

The producers of State of the World, however, are not content with supplying a source of information. On the cover of every issue there is prominently displayed the following subtitle: “A Worldwatch Institute Report on Progress Toward a Sustainable Society.” How reassuring: Despite all the hand-wringing and dire predictions of environmentalists, we are progressing toward a sustainable society: no less an authority than the Worldwatch Institute tells us so. But wait a minute. Let’s look inside the latest report and see what evidence is presented in support of this good news. Alas, we are doomed to disappointment. Of nine chapters, only one—the last entitled “Learning from the Ozone experience”—can be described as even moderately upbeat. The rest add to the dismal story of environmental deterioration spelled out in previous reports on the state of the world.

If you think there is a contradiction between the progress toward a sustainable society proclaimed on the covers of Worldwatch’s annual reports and their contents, you are of course right. The former is what capital would like us to believe, the latter are produced by scientists and conscientious researchers.

You might wonder why both of these points of view should coexist in an institution like Worldwatch. The answer is that Worldwatch needs a lot of money to carry on its activities, and this can be obtained only from those who have it, and in a country structured like the United States that means mostly from foundations established and financed by wealthy capitalists. In the acknowledgments preceding the text of the 1997 State of the World, no fewer than sixteen foundations are thanked for their contributions, including multimillion-dollar entities with names like Dodge, Ford, MacArthur, Mellon, Rockefeller, and Pew. This explains the relevance of capital’s point of view to the Worldwatch enterprise.

We are not suggesting, however, that capital dictates the contents of the Worldwatch reports. Not at all. Capital needs accurate knowledge of what’s going on in the world, and in this respect the State of the World series is a valuable source of information, well worth paying for. Presenting the series as chronicling “progress toward a sustainable society” is of course nonsense, but it is hardly likely to fool anyone who takes the trouble to read them.

Where the point of view of capital shows up and can be considered as decisive is not in the contents of the reports or in the way the publisher chooses to describe them but in what they scrupulously refrain from saying or even hinting at. And that is (1) that the state of the world is not progressing toward sustainability, but continuing and deepening environmental deterioration; and (2) that the real cause of this frightening and ultimately disastrous trend is capitalism, a society driven by insatiable hunger for profits and capital accumulation regardless of the consequences for present or future generations.

Russell Baker, the New York Times op-ed columnist, is arguably America’s premier journalistic figure—a master of the comic, a brilliant satirist, and on occasion a first-rate political analyst and reporter. We were put in mind of this last quality by his column of March 18 which could have been, and should have been, run as a sensational page one news story. The column picks up on an obscure inside-page story in the Times of February 15, 1997, which in turn was based on a press release from the Johnson Presidential Library containing taped recordings of 1964 phone conversation between the president on the one hand and on the other his national security adviser McGeorge Bundy, and Senator Richard Russell, chairman of the Senate Armed Services Committee. What the tapes disclose, in Russell Baker’s words, is that “Lyndon Johnson, as early as 1964, viewed the Vietnam War as pointless.” Baker then adds: “The twist that makes this a tale for a great fiction writer is Johnson’s belief that, pointless though it was, Congress would destroy him if he tried to pull out. So he didn’t, and so the war destroyed him instead. And gave us all that death.” The rest of the column is equally eloquent—and damning.

How to Spread the Word
Globalization Is An Issue, The Power of Capital Is The Issue