Dear Reader, we make this and other articles available for free online to serve those unable to afford or access the print edition of Monthly Review. If you read the magazine online and can afford a print subscription, we hope you will consider purchasing one. Please visit the MR store for subscription options. Thank you very much. —Eds.
Notes from the Editors
by The Editors
(Jan 01, 2000)
Topics: Movements 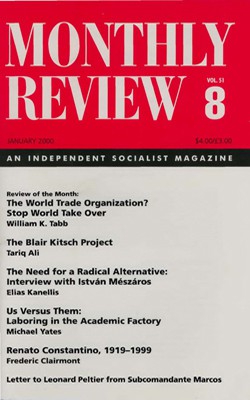 Our Assistant Editor, Vicki Larson, was in Seattle for the demonstrations against the WTO. We are pleased, indeed proud, to present Vicki’s account of these very important events.

I was in Seattle from Saturday, November 26, until Wednesday, December 1. Many organizations (including Public Citizen, Global Exchange, and the International Forum on Globalization) offered workshops and teach-ins to educate people about “free” trade and fair trade and to prepare demonstrators for the mass actions and protests on Tuesday, November 30. The Northwest Labor & Employment Law Office (LELO) helped ensure that people of color were represented at the big union rally the same day, and the Independent Media Center (IMC) mobilized journalists and activists to document and broadcast everything that was taking place. In the streets and at trainings given by the Direct Action Network (DAN), I joined thousands of people unwilling to give in to the invisible government of the WTO. We learned legal support techniques and jail solidarity tactics, and developed strategies for nonviolent action through role-playing and discussion. For a few days, in Seattle and in cities in solidarity all over the world, people finally mattered more than profit.

At seven in the morning on November 30, I went with several friends to the opening rally at Seattle Central Community College on Capitol Hill. A few people spoke to the crowd; puppets, banners, drums, and a tuba were mustered; and we began marching through the rain toward the convention center, where the ministerial meetings were to be held. My group, which included three legal support people and two lawyers, decided to stay near the blue flags that signified people willing to be arrested. (Green flags were for people who wanted to participate but not end up in jail). A few minutes after we started walking, a group of about fifty people in hooded black sweatshirts, black pants, and black boots broke off from the main march. We joined them, thinking that they were likely to encounter police and might need legal support. We yelled “wake up!” to the apartments above storefronts as we walked, and people hung out their windows to watch or encourage. Police blockades were everywhere. Our route was circuitous and fluid, decided upon by a few people with walkie-talkies at the front of the group. As we neared the convention center, we found about thirty people locked down in front of one of the entrances, facing several squad cars. The anarchists we’d been with scattered, and my group talked to the people stretched across the road, arms joined inside lengths of pipe.

The rest of our day was spent on the move. We ran from blockade to blockade: sometimes as legal support, calling in to the DAN legal office to ask where help was most needed, writing the legal office phone number on the insides of demonstrators’ arms in case they landed in jail, gathering information from a man who’d been shot in the face with a rubber bullet (minutes after we’d heard cops tell reporters they weren’t shooting); sometimes as impromptu medics, washing out the eyes of teargassed or pepper-sprayed demonstrators; and sometimes as protesters, getting gassed several times ourselves.

I’ve heard and read incessant commentary about the violence. By Monday, December 6, one newspaper was estimating 2.5 million dollars in property damage and 7 million dollars in lost revenue for downtown stores. Laid-back Seattle residents at first did seem frustrated with the “hubbub” but, as they became aware of the police aggression, quickly began siding with the protesters. But what about violence of the WTO? Windows were smashed and tagged with graffiti at the Gap, Banana Republic, Old Navy, Nike, Starbucks, and Warner Brothers, all of whom are known for their use of sweatshop labor. No one screeching about violence seems bothered by women losing fingers as they sew clothes for the Gap in Saipan. Shouldn’t we show our intolerance of murderous corporate greed in the most direct way possible? I saw a man yelling “Use your words!” at a black-hooded teenager kicking in a window at Starbucks. Since when does any giant corporation or the WTO really use words? If you don’t have money, how do you speak to a multinational corporation? And the police—spraying tear gas, pepper spray, wielding billy clubs, and shooting rubber bullets in defense of the corporate capitalist state—were much more violent than any of the protesters.

Because of the heightened sense of struggle (and success) in Seattle, coming home has been very difficult. As this goes to press, one week after the convergence, I am back in New York City, with its frenzied consumers, massive billboards, and vapid holiday fervor. I am profoundly uncomfortable. I don’t want to relax or adjust; I want to keep fighting. The spirit that makes revolution possible was strong on the streets of Seattle. I saw courage, strategy, and determination that I am neither willing nor able to forget. People who were gassed or sprayed moved over to the sidewalk to clean their eyes and skin and catch their breath, then went straight back into the street. We fought the WTO with our bodies and our minds, shut down the opening day of meetings, and helped derail the piece of the program that extends the power of global capitalism. A clear and radical goal was articulated and accomplished. I saw solidarity emerge among labor and environmentalists, liberals and radicals, young and old. Multiple approaches flourished: a protestor could march with the AFL-CIO or dress up as a sea turtle, try to block delegates attempting to enter the convention center, dance to hip-hop and techno coming over a sound system hidden inside a van blocking an intersection, lock down in front of a row of riot police, answer phones, dispatch medics, smash windows.

Now the long-term struggle resumes: continuing to spread the word, keeping people awake, angry, alive. One piece of graffiti was painted all over Seattle: “Don’t Forget. We are Winning.”