Dear Reader, we make this and other articles available for free online to serve those unable to afford or access the print edition of Monthly Review. If you read the magazine online and can afford a print subscription, we hope you will consider purchasing one. Please visit the MR store for subscription options. Thank you very much. —Eds.
Notes from the Editors
by The Editors
(Nov 01, 2003)
Topics: Political Economy 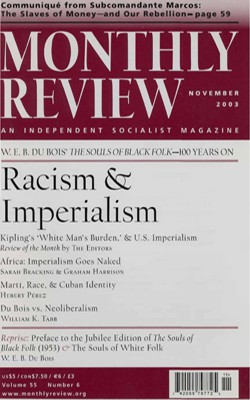 In this number we are celebrating the hundredth anniversary of W. E. B. Du Bois’ The Souls of Black Folk by devoting a special issue to race and imperialism. MR is proud to have had a connection with Du Bois. Fifty years ago he wrote his famous article “Negroes and the Crisis of Capitalism in the United States” for MR (April 1953; reprinted in the magazine last April). In addition, Monthly Review Press is the publisher of Du Bois’ Education of Black People: Ten Critiques, 1906–1960, edited by Herbert Aptheker. This was a book that Du Bois had planned, based originally on seven critiques of education that he had delivered as speeches over the years. But his attempts in the 1940s to get it published proved futile. One publisher after another turned down the work—no doubt scared off by the very same ruthless critique that made his work so valuable. Yet, Du Bois never gave up hope of bringing out this book and it was found among his papers after his death in 1963. The published version, which was announced in the MR Press catalog in 1973 and has remained in print ever since (a new edition with a new foreword by Aptheker was brought out in 2001), included the original seven critiques and the short introductions that Du Bois had written for each of them for the book. It also contained three critiques of education that he had written in subsequent years. Everyone interested in the effects of race and class exploitation on higher learning in the United States would gain from a careful study of this profoundly humanistic, often lyrical, and fundamentally subversive work. In his 1908 lecture, “Galileo Galilei,” included in The Education of Black People, Du Bois wrote: “The greatest gift that a scholar can bring to Learning is Reverence of Truth, a Hatred of Hypocrisy and Sham, and an absolute sincerity of purpose.” There is no doubt that Du Bois exemplified this principle throughout his entire life.

Du Bois’ unswerving commitment to truth required both the courage to engage in critique and absolute incorruptibility—what Paul Baran was later to call the “commitment of the intellectual.” One contemporary example of such a commitment is to be found in David F. Noble, author of the Monthly Review Press book, Digital Diploma Mills: The Automation of Higher Education (2001). More than anyone else today Noble has been fighting the commercialization of the universities, which has been taken to new lengths with the growth of digital technology. Readers of Digital Diploma Mills will be aware of Noble’s many career difficulties in the academy resulting from his unstinting criticism of our acquisitive society. As he noted in that book, “Even as I write this, my appointment to the endowed Woodsworth Professorship in the Humanities at Simon Fraser University is being blocked by…ideologically blinded administrators because of my criticism of online education and the corporatization of academia.” In March 2001 the Academic Freedom and Tenure Committee of the Canadian Association of University Teachers (CAUT) established a committee of inquiry, at his request, to look into the details of his case at Simon Fraser. The CAUT’s report was made public this September (www.caut.ca/). It concludes that “that there were violations of Dr. Noble’s academic freedom” and that the appointment had been almost certainly blocked because of Noble’s outspoken criticisms of online education. The report noted that the Department of Humanities had been particularly keen on hiring Noble because of his expertise related to educational technology as represented by Digital Diploma Mills, while the president of Simon Fraser had declared in an e-mail to another member of the administration that the appointment of Noble had to be avoided “like the plague” apparently for the same reason. This was found to be a clear case of “bias” on the part of the university administration.

“The CAUT report on the SFU case,” Noble has said, “is an important contribution to the cause of academic freedom in Canada, as an illustration of how the commercialization of universities compromises academic integrity….It should be stressed that what happened at SFU is by no means unusual, except for its having been exposed. The full account, especially of the commercial connections, will be made public in my lawsuit.”

Another example of intellectual incorruptibility can be found in the life and work of Edward W. Said, who died on September 25. Said was an internationally influential cultural analyst and an activist in support of Palestinian self-determination. He was, as well, a friend, reader, and admirer of Monthly Review. Obituaries in major newspapers worldwide have concentrated on what they perceived as two disparate strands in his life: his work as a literary historian and critic and his passionate advocacy of the “Palestinian cause.” In fact, however, Said’s work as an interpreter of the uses of culture in the Western imperialist project, first elaborated in his Orientalism (1978), was profoundly political. Orientalism’s focus was on the anti-Arab and anti-Muslim, Eurocentric, racist ideology used to justify Western expansion and domination for at least a millennium since the Crusades. In 1980, commenting on Orientalism, Said wrote “I have not been able to discover any period in European or American history since the Middle Ages in which Islam was generally discussed or thought about outside a framework created by passion, prejudice and political interests.”

Said’s career was remarkable for its literary and scholarly productivity and breadth, from an early book, Joseph Conrad and The Fiction of Autobiography (1966), through the incisively argued Question of Palestine (1979), to the consummate analysis of cultural supremacy and powerlessness in Culture and Imperialism (1993). His nearly two dozen books also included works on music and a memoir. But it was in his studies of the singular reach of European and American cultural imperialism—as ever in aid of the plunder of natural resources and geopolitical domination—that he made his greatest contribution. In Culture and Imperialism Said emphasized the emergence of what he called the “oppositional strain” found, especially, in the last half-century in the imaginative work of Salman Rushdie, Aimé Césaire, Frantz Fanon, and Gabriel Garcia Márquez, among others. In the same work he scrutinized the mechanism by which history, social “science,” indeed most academic ideas, and ideology, are manipulated, even reinvented, to serve the changing political imperatives of the imperialist West.

Edward Said was charming, witty, and compassionate, traits best exhibited in his extraordinary collaboration with the celebrated Israeli conductor Daniel Barenboim. The two were committed to the idea that musical collaboration could breach the chasm of hatred, prejudice, and violence that is the day-to-day reality in Israel/Palestine. So, despite the ravages of a decade-long bout with leukemia, Said, an accomplished pianist, joined Barenboim to found the West-Eastern Divan Orchestra and to teach classes in the West Bank, about which they wrote in Parallels and Paradoxes: Explorations in Music and Society (2002). His death is a great loss and we at MR will miss him.

Kipling, the ‘White Man’s Burden,’ and U.S. Imperialism
The Tragedy of Rwanda