Dear Reader, we make this and other articles available for free online to serve those unable to afford or access the print edition of Monthly Review. If you read the magazine online and can afford a print subscription, we hope you will consider purchasing one. Please visit the MR store for subscription options. Thank you very much. —Eds.
Notes from the Editors
by The Editors
(Jan 01, 2010) 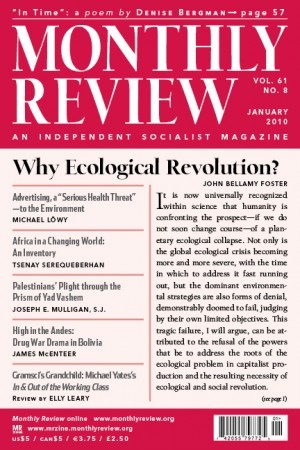 As this issue goes to press, the Copenhagen climate summit, which Nicholas Stern, author of The Economics of Climate Change, has referred to as “the most important meeting since the Second World War,” is about to begin. The summit was supposed to herald a new global climate treaty, to replace the failed and expiring Kyoto Protocol. The goal was to create an ambitious, binding international agreement on emissions reductions. Yet, barely a week before its commencement (as we write this) it seems destined to fail. Although concrete numbers on emission cuts are finally being discussed, with Washington talking of a 17 percent reduction in U.S. carbon emissions from their 2005 high by 2020, the European Union, brandishing a figure of a 20 percent cut from 1990s levels over the next decade, and China, pledging a 45 percent decrease in its carbon intensity in the decade to come (with its total emissions, however, still going up), all of this falls far short of what climate science says is necessary to prevent irreparable destruction of the planet as we know it, threatening the survival, not only of most plant and animal species, but our own species as well. (“There is Still Hope for Real Progress at Copenhagen,” Independent, November 28, 2009; James Hansen, Storms of My Grandchildren [New York: Bloomsbury USA, 2009].) Plus, the leading countries are not willing to agree to binding agreements at this point, even in relation to these meager targets. Hence, there is little doubt that the Copenhagen summit will mark a turning point, but one opposite to that originally intended. It will symbolize not the historic success but the historic failure of the dominant approach to the climate crisis, and the need for far more radical solutions. This is the subject taken up in this month’s Review of the Month, “Why Ecological Revolution?”

If the future health of the planet is in jeopardy, so are the health care needs of most human beings on the planet—and for essentially the same reasons, having to do with the dominant for-profit system. The struggle over the last year for a rational health care system in the United States, along with its extremely disappointing and contradictory results, is a reflection of the larger tragedy of capitalist health care worldwide. This is the issue taken up in the recently published 2010 edition of the Socialist Register, edited by Leo Panitch and Colin Leys, entitled Morbid Symptoms: Health Under Capitalism (New York: Monthly Review Press, 2009). Approaching health as a field of political-economic analysis, the contributors to Morbid Symptoms address such varied issues as the commodification of health care; inequality and health; accumulation in the health care industry; the power of pharmaceutical corporations; worker struggles and occupational health; maternal mortality; obesity and the food industry; HIV/AIDS and the struggle for public health; mental health in a sick society; marketization of European health care; China’s double movement in health; India and neoliberal globalization in health care; and the Cuban health system. Those wishing to purchase Morbid Symptoms may do so by going to https://monthlyreview.org/books/index.php or by calling 1-800-670-9499.

Mark Billings, who died in El Cerrito, CA on November 5, 2009, age 95, was a veteran of the Abraham Lincoln Brigade in the Spanish Civil War, and a reader for many years of Monthly Review (including the October 2009 issue). Mark arrived in Spain in 1937, where he served the Spanish Republic as a truck driver delivering food to Madrid and other cities. He was hit by shrapnel in Almeira when the German fleet shelled the city. After spending several months in the hospital, he returned home in December 1937. In 1996, Mark was given honorary Spanish citizenship. He was honored in 2008 by the San Francisco Board of Supervisors, during the dedication of the Monument to the Abraham Lincoln Brigade. Mark continued opposing U.S. military interventions into his nineties and attended demonstrations against the Iraq War in 2003. He was quoted in the November 1, 2008, issue of the New York Times for saying that presidential candidate John McCain, who tried to wrap himself in the image of Robert Jordan, Hemingway’s fictional Abraham Lincoln Brigade hero in For Whom the Bell Tolls, was the “very antithesis of what we stood for.” Mark remained a committed socialist until his death. He is survived by three children and six grandchildren.

Why Ecological Revolution?
Exploring the Dialectic of the Bolivarian Revolution