Dear Reader, we make this and other articles available for free online to serve those unable to afford or access the print edition of Monthly Review. If you read the magazine online and can afford a print subscription, we hope you will consider purchasing one. Please visit the MR store for subscription options. Thank you very much. —Eds.
Notes from the Editors
by The Editors
(Apr 01, 2010) 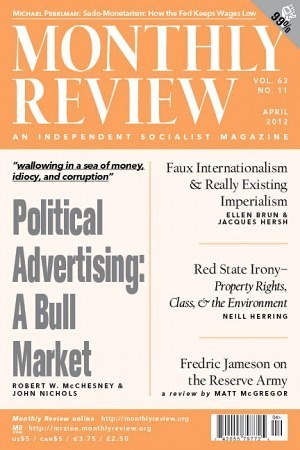 April 10, 2010, marks the hundredth anniversary of the birth of Paul Sweezy (1910-2004), and December 8, 2010, will mark a century since the birth of Paul Baran (1910-1964). Their joint work, Monopoly Capital: An Essay on the American Economic and Social Order ,was published by Monthly Review Press in 1966. Between this month and December, we intend to commemorate the Baran-Sweezy Centennial through items to appear in Monthly Review, MRzine, and the MR Webpage. We will also commemorate this year the work of their close friend and colleague Harry Magdoff, born August 21, 1913, whose writing is inextricably connected to theirs.

In this issue, we are reprinting Magdoff and Sweezy’s “Financial Instability: Where Will It All End?” which appeared in the November 1982 issue of MR and was the preface to the Japanese translation of Magdoff and Sweezy’s The Deepening Crisis of U.S. Capitalism. It remains relatively unknown, since it was not included in their later essay collections. It is of particular interest today since it directly addresses the work of Hyman Minsky and the question (made famous by Minsky): “Can ‘It’ Happen Again?” It therefore raises issues directly related to the present Great Recession, and to the exchange on the current economic crisis between Thomas I. Palley and John Bellamy Foster and Robert W. McChesney, also appearing in this issue.

Nancy Sweezy, a leading folklorist in the United States, formerly the wife of Paul Sweezy and an important part of Monthly Review in its early years, died in Cambridge, Massachusetts on February 6. She was 88. Sweezy was known to a generation of musicians for her role as president of the board of directors of the Club 47 in Harvard Square, a key venue in the folk music revival of the 1960s and early ’70s, that hosted talents as varied as Joan Baez, Doc Watson, Bob Dylan, Bill Monroe, Libba Cotten, Tom Ashley, and John Hurt, among others. Nancy Sweezy helped to guide a generation of performers, producers, managers, and folk music enthusiasts. Her house on Agassiz Street in Cambridge served as the gathering place for out-of-town performers and for aspiring musicians to sit at the feet of mentors.

In 2006 the National Endowment for the Arts celebrated Nancy Sweezy’s leadership in the field of folk arts by presenting her, at the Library of Congress, with the Bess Lomax Hawes National Heritage Fellowship. In declaring her a National Treasure, the presenters made particular note of her seminal role in reviving North Carolina’s famed Jugtown Pottery. Living, working, and applying her management, advocacy, and people skills at Jugtown in the late 1960s and early ’70s, Sweezy helped inspire a revival of the traditional pottery community and watched it grow, from seven potteries in the Seagrove area when she first arrived, to more than 115 today. In the fall of 2008, Sweezy returned to Jugtown to be interviewed for the award-winning PBS series, Craft in America.

Also acknowledged during the National Heritage Fellowship presentation were Sweezy’s work with Ralph Rinzler, Director of the Smithsonian Institution’s annual Folklife Festival on the Mall in Washington, D.C.; her seminal, Raised in Clay for the Smithsonian Press on the Southern pottery tradition; her founding of the Refugee Arts Group, which collaborated with the Cambodian, Hmong, and other Southeast Asian communities in the preservation of their traditional crafts and performing arts; and her co-curating in 2005 (with potter Mark Hewitt) of the North Carolina Museum of Art’s highly praised exhibition, The Potter’s Eye: Art and Tradition in North Carolina (including the companion book with the same title). Before this she had edited and co-wrote the book, Armenian Folk Arts, Culture, and Identity, compiled during more than a dozen trips that she made, despite the danger and unrest, to Armenia, with the artistic and logistical support of her son, the photographer Sam Sweezy.

Born October 14, 1921, and educated at the Boston’s Museum School of Fine Arts and the Stuart School, Nancy Sweezy’s early life demonstrated a similar taste for risk and adventure. When the Second World War broke out, she was offered a job in the Research and Analysis Branch (R&A) of the Office of Strategic Services, the predecessor to the Central Intelligence Agency. Her job was to assist in the analysis of Germany’s ability to fight the war. Soon, working with Chandler Morse, the Director of R&A, she helped to coordinate a flow of pertinent information among the various U.S. government agencies, on a need-to-know basis.

In November 1944, Sweezy moved with her R&A section from Washington, D.C. to London, zigzagging across the Atlantic on a bitterly rough trip in a convoy of blacked-out troop ships, shielded by U.S. destroyers. In London she joined her mentor and friend, American Ambassador Gil Winant and his staff, working in the streets during post-V-2 bombing rescue efforts.

As the Allied armies prevailed, she moved with her section to the Continent, focusing on an examination of the Morgenthau plan to de-Nazify Germany. She was in Paris on Victory Europe Day, walking the city all through its wild night of celebration. Soon after she was sent to Wiesbaden, Vienna, and Berlin, where she went down into Hitler’s bunker.

It was in Germany that Nancy Sweezy met her future husband, Paul M. Sweezy, the chief writer of the R&A reports. They were married soon after, and settled in Wilton, New Hampshire. Her husband, a Harvard economist, later became known as the dean of American Marxists. Their life in these years centered on raising their children and on the launching in 1949, by Paul Sweezy and his coeditor Leo Huberman, of Monthly Review. On two occasions in 1954, New Hampshire Attorney General Louis C. Wyman subpoenaed Paul Sweezy to testify on “subversive activities” related to a university lecture and to his role (and that of others) in the 1948 Wallace campaign for the presidency. His refusal (with Nancy’s support) to take refuge in the Fifth Amendment resulted in his being briefly imprisoned and led to the First Amendment-based, Supreme Court case Sweezy v. New Hampshire in 1957, which contributed to the end of the McCarthy era. It also resulted in social and political pressure on Sweezy and her family. She and Paul Sweezy divorced in 1960.

Throughout her life, Nancy Sweezy was an advocate for human rights and a believer in the magic of music, dance, and handmade objects to preserve the soul of a culture and its community. She is survived by her son Sam, daughters Lybess and Martha, five grandchildren, and four great-grandchildren.

This month is the fiftieth anniversary of the birth of the Student Nonviolent Coordinating Committee, prime mover in the 1960s sit-in movement that sparked the Civil Rights struggle. A conference will be held at Shaw University, Raleigh, North Carolina April 15-18, site of the first anti-segregation sit-in. For information see http://sncc50thanniversary. For background see Julian Bond’s “SNCC: What We Did” in the October 2000 Monthly Review (https://monthlyreview.org/001001bond.php). Congratulations, SNCC veterans!

How to Visit a Socialist Country
For Howard