Dear Reader, we make this and other articles available for free online to serve those unable to afford or access the print edition of Monthly Review. If you read the magazine online and can afford a print subscription, we hope you will consider purchasing one. Please visit the MR store for subscription options. Thank you very much. —Eds.
Notes from the Editors
by The Editors
(May 01, 2010) 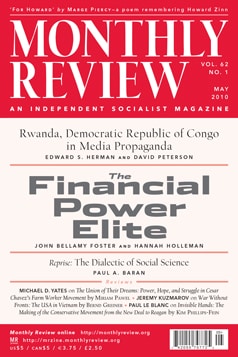 The more serious the problem of climate change becomes, the more revolutionary the change needed to address it—the more we can expect powerful economic and social interests to deny the seriousness of the problem: playing up scientific uncertainties that always exist, and casting doubt on climate science itself. The object of such a response is to manipulate public opinion so as to sow confusion and arrest any attempt to alter business as usual.

In this space in the March 2010 issue of MR, we noted the controversy that arose as a result of the discovery of a single error in the Intergovernmental Panel on Climate Change’s Fourth Assessment Report: Climate Change 2007 (known as AR4). The report as a whole consisted of three volumes of nearly 1,000 pages each. The regional chapter on Asia in AR4’s volume 2 mistakenly said, in one lone paragraph, that the Himalayan glaciers could disappear as early as 2035. This isolated error (one wrong number in a massive report), although publicly acknowledged recently by the IPCC itself, hardly casts doubts on the entire AR4 (the section of the report devoted to glaciers contained no such mistake). The fact remains that glaciers in the Himalayas and elsewhere are melting rapidly, and the effects are likely to be catastrophic this century.

Nonetheless, the climate denial community immediately labeled this “glaciergate,” and took it as a sign that the IPCC was inept and vulnerable to attack. Since then there has been one claim after another of supposed errors by the IPCC: labeled “Africagate,” “Amazongate,” “Seagate,” etc. The main attacks have centered on the findings of the IPCC’s Working Group II, which carries out assessments by social scientists, ecologists, etc., who are responsible, not for the underlying climate science, but for determining specific climate impacts on ecosystems and society (a much more difficult problem). As explained by the climate scientists at RealClimate.org in a February 2010 report, “IPCC Errors: Facts and Spin,” the leading media figure in advancing such criticisms of the IPCC has been Jonathan Leake, science and environment editor for the Sunday Times of London (a Murdoch paper).

Despite the proliferation of alleged “gates,” the climate scientists at RealClimate observe: “As far as we’re aware, so far only one—or at most two—legitimate errors have been found in AR4.” The second “error” did not have to do with the IPPC itself, but was carried over from a mistake in a Dutch government report on the amount of the Netherlands below sea level, and was unrelated to the underlying science on climate change.

The other “errors” pointed to by critics and hyped by the media are all nonexistent, except in the minds of their proponents. Take for example, African crop yields. The AR4 said that yield losses from rain-fed agriculture in some countries in Africa could be as much as 50 percent by 2020. Jonathan Leake labeled this “Africagate,” mainly on the grounds that the source used by the IPCC was not a peer-reviewed study but a report by Moroccan climate expert Professor Ali Agoumi, written for the International Institute for Sustainable Development and the Climate Change Knowledge Network. Leake and others suggest that the IPCC report should be based entirely on peer-reviewed scientific articles and should not cite so-called “gray literature,” i.e. government reports, research reports of organizations, etc. This is, however, impossible since much indispensable research and knowledge is contained only in such sources (for example government data). Close reading of the IPCC statement on African crop yields indicates that it is treated in a balanced way, as part of variable outcomes, taking into consideration possible mitigating factors. There is no question that the IPCC statement itself, especially if read in context, is factually correct, as numerous scientists engaged in research in this area have indicated.

Leake and climate change denialist Richard North, a contributor to the Telegraph (London), have also pointed to what they call “Amazongate.” AR4 stated: “Up to 40% of the Amazonian forests could react drastically to even a slight reduction in precipitation; this means that the tropical vegetation, hydrology and climate system in South America could change very rapidly to another steady state, not necessarily producing gradual changes between the current and future situation.” Again the critics charge that this statement relies on gray literature, in this case a World Wildlife Fund report (which used an article in Nature by Nepstad, et al. as its source). No factual error appeared in the IPCC report here. Indeed, Daniel Nepstad, who is the senior scientist at Woods Hole Research Center, has issued a response indicating that “the IPCC statement on the Amazon was correct” in its presentation of scientific findings, but that some of the specific peer-reviewed studies that might have been provided in support of the IPCC statement in question were unfortunately not cited in AR4. (“Senior Scientist Daniel Nepstad Endorses the Correctness of the IPCC’s (AR4) Statement on Amazon Forest Susceptibility to Rainfall Reduction,” Woods Hole Research Center, http://whrc.org, February 2010.)

The focus on a few cherry-picked, relatively trivial errors, all but one of which were not IPCC errors at all, in relation to a report of this magnitude, and their magnification into successive scandals or “gates,” is clearly designed by denialists in general to put climate scientists on the defensive. The goal is to distract attention from the real weakness of the IPCC report: the fact that since it is based on a conservative-leaning, often overly cautious scientific consensus, and does not include the latest scientific data, which shows that climate change is accelerating, the report actually understates the climate change problem. Hence, the real discussion among experts over the last few years, since AR4 appeared, has focused on the IPCC’s underestimation, rather than overestimation, of the dangers of climate change in areas as significant as the melting of sea ice and sea level rise. Added to this are growing concerns about the relations between climate change and its “evil twin,” ocean acidification.

The dangers of climate change and of the planetary ecological crisis as a whole are too great to be rationally denied. The focus at this point needs to be on what society should do about it. Recent attempts to address this problem are to be found in the January, February, and March issues of <em>MR</em>, as well as in John Bellamy Foster’s The Ecological Revolution (Monthly Review Press, 2009). We were pleased to see that a review of this book by Ted Benton appeared on Marx & Philosophy (March 6, 2010). He stated: “This book is a major achievement. It combines enormous breadth of scholarship with consummate theoretical integration to produce a powerful political argument. It should be required reading for anyone who cares about the future of humanity and the planet—that is everyone!” (Benton is one of the foremost ecological thinkers of the British New Left, author of Natural Relations and numerous other works.)

The Financial Power Elite
Sartre: Conversations with a “Bourgeois Revolutionary”