Dear Reader, we make this and other articles available for free online to serve those unable to afford or access the print edition of Monthly Review. If you read the magazine online and can afford a print subscription, we hope you will consider purchasing one. Please visit the MR store for subscription options. Thank you very much. —Eds.
Notes from the Editors
by The Editors
(Jul 01, 2010) 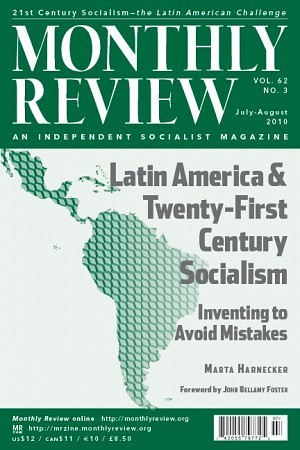 For those wishing to understand the theory and practice of “socialism for the 21st century,” the publication this summer of Michael Lebowitz’s The Socialist Alternative: Real Human Development (Monthly Review Press) is a major event. Like Marta Harnecker, whose work, “Latin America and Twenty-First Century Socialism: Inventing to Avoid Mistakes,” forms the content of this issue of Monthly Review, Lebowitz is associated with the Centro Internacional Miranda research institute in Venezuela, is an advisor to President Hugo Chávez, and is a major Marxian theorist and political economist. He is also author of Beyond Capital: Marx’s Political Economy of the Working Class, and, more recently, Build it Now (Monthly Review Press, 2006).

Lebowitz’s new book is about the transition to socialism, and in this respect, he has been deeply influenced by Venezuela’s Bolivarian Revolution, which permeates his thinking. But The Socialist Alternative, as he notes in his preface, “is not a book about the Bolivarian process in Latin America.” Rather, it is an attempt “to go beyond the particulars of that case and to prepare ourselves for struggle everywhere. Accordingly, The Socialist Alternative draws upon the Venezuelan experiment to develop a general vision of socialism and concrete directions for struggle” (pp. 9-10). In that sense, Lebowitz’s book is to be regarded as a necessary complement to Harnecker’s discussion, in this issue of MR, of the particular aspects of twenty-first century socialism.

Lebowitz forcefully demonstrates in The Socialist Alternative that the phrase “socialism for the 21st century” is not a mere slogan but a rapidly developing critical practice. The red thread running through his book is an attempt to demonstrate at a theoretical level how Chávez’s notion (derived from the work of István Mészáros) of the “elementary triangle of socialism”—social ownership of production, production controlled by workers, and production for communal needs—has transformed the entire conception of the transition to socialism. The “socialist triangle” thus becomes a means of explaining what needs to be done (and what was not done or done badly in the past) and of suggesting the type of immediate strategies that can be implemented to build socialism now.

Indeed, underlying the entire argument in The Socialist Alternative is a fundamentally different notion of social systems, arising from Mészáros’s reinterpretation of Marx and the Marxian legacy, and growing out of Lebowitz’s own work over the years. This reinterpretation centers on the treatment of capitalism and socialism as organic (not mechanical) systems. An organic system, in this sense, is a system that establishes its own premises, and is to be regarded as a continuous and developing process. This means that changing an organic system requires not merely the change of a part or two, but rather the metamorphosis into a new organic whole. “Mészáros,” in Beyond Capital (Monthly Review Press, 1995), Lebowitz explains, “stressed the need to restructure all of the parts of [capital’s] organic system” (p. 25). Hence, The Socialist Alternative requires that all sides of the “socialist triangle” must “mutually interact.”

The transition from one organic system to another is thus not the mechanical replacement of one “strategic component” (or “commanding height”) for another. Nor is it simply the leap from one mechanical system (say, the market) to another mechanical system (a command economy). Rather, what has to be nurtured within a transition, necessarily taking place within the old society, are the various specific relationships—relationships primarily between human beings—that are essential to the new organic whole. These new relationships (such as the promotion of worker management and the creation of a “solidarian society” based on communal interchange) are at the same time to be conceived as “despotic inroads on the rights of capitalist property. They are part of a process of subordinating capitalism to an alien logic, the logic of human development….After all, [this] is the socialist alternative—real human development” (pp. 69, 136, 166).

To what extent is this emerging theory of twenty-first century socialism—as articulated by Lebowitz in his new Monthly Review Press book and by Harnecker in this issue of Monthly Review—applicable to other regions of the world, outside of Latin America, even to Europe? We are convinced that the world is now deep in a transition phase away from capitalism, as witnessed by the fault lines emerging everywhere—global financial and economic crisis, planetary ecological crisis, growing militarism and imperialism, rising social unrest, and the emergence in some parts of the world of real alternatives. The fierce, courageous struggle being waged today by the Greek populace is an indication of how far things have now gone, even in Europe. We were recently impressed by a statement by Stathis Kouvelakis, who teaches philosophy at King’s College in London. In an interview for Esquerda.net on May 17, 2010, he commented: “Greece is the weak link [in the European context]. It’s the weak link because Greek capitalism is perhaps the most fragile, at least in Western Europe, but it is the weak link also because it is the country where the level of social resistance, social movements, and popular struggle is the highest. The ruling class is very much aware of this, and they want to make Greece a test case, so everyone should be aware of the stakes now” (“Greece: The Weak Link,” May 23, 2010).

The stakes for the European working class as a whole are therefore very big. The social democratic welfare state across Europe is in question; indeed, it cannot be saved. The choice, as the Greek people seem to be realizing in their courageous demonstrations (bordering on insurrection), is to capitulate to a savage system or to seek a genuine socialist alternative—real human development—a socialism for the twenty-first century.