Dear Reader, we make this and other articles available for free online to serve those unable to afford or access the print edition of Monthly Review. If you read the magazine online and can afford a print subscription, we hope you will consider purchasing one. Please visit the MR store for subscription options. Thank you very much. —Eds.
Notes from the Editors
by The Editors
(Nov 01, 2010)
Topics: Political Economy Stagnation 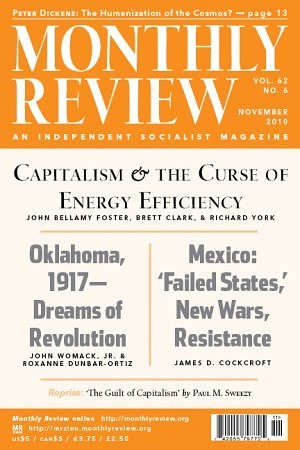 Although the Great Recession officially ended in the U.S. economy more than a year ago (June 2009), for most people—especially the long-term unemployed, minorities, and youth—the effects are far from over. Indeed, it is a measure of the economic malaise in which the industrialized countries remain mired that the specter of stagnation is once again haunting mainstream discourse. As Paul Krugman recently observed, the U.S. economy is experiencing “what looks increasingly like a permanent state of stagnation and high unemployment” akin to the 1930s (“This is Not a Recovery,” New York Times, August 26, 2010).

Krugman is not alone in pointing to long-term economic stagnation. Barry Bosworth, a Brookings Institution economist who served in the Johnson and Carter administrations, answered a question on the state of the economy on Bloomberg Television in early September by saying, “I think we are entering into a period of sort of stagnation” similar to that of Japan since the 1990s (“Brookings’ Bosworth Interview on U.S. Economy,” Bloomberg.com, September 9, 2010). James Bullard, president of the Federal Reserve Bank of St. Louis, has issued a report (“Seven Faces of ‘The Peril,’” Federal Reserve Bank of St. Louis Review, September-October 2010) indicating there is a danger that “the U.S. and Europe” will “join Japan in the [stagnation] quagmire.” David Wyss, chief economist at Standard & Poor’s, has declared: “I think there is a realistic possibility in the U.S. that it’s slipping into this pattern like Japan has—10, 20 years of stagnation” (“U.S. Has ‘Realistic Possibility’ of Stagnation,” Bloomberg.com, August 24, 2010). Economic analysts are now openly discussing the likelihood that the entire industrialized world may be threatened with a “lost decade” or two. (“Industrialised World’s ‘Lost Decade’ Risk,” AFP, September 1, 2010).

All indications are that the pain of stagnation will be much worse in the United States than Japan—where, as Krugman argues, it has been managed in such a way as to lessen the effects on the population (“Things Could Be Worse,” New York Times, September 9, 2010). The Keynesian deficit spending measures taken by the Japanese ruling class in response to the financial crisis of the early 1990s were, to a degree, successful. The enormous weight of uncollectible debts held by the banks was gradually reduced over time. What would in the United States or the European Union be regarded as “full employment” was maintained (though partly reflecting the low labor participation rate of Japanese women). Infrastructure was renewed in all areas. Hence, joining the Japanese “quagmire” would be preferable in many ways to the stepped-up ruling-class war on social spending, now being pushed in the European Union and the United States, which could make “Japan look,” in Krugman’s words, “like the promised land.” References to the Japanese “quagmire” should therefore be taken with a grain of salt. Nevertheless, in two decades Japan has been unable to find the means to lift itself out of the stagnation that began with its financial-real estate crash in the early 1990s. Japan too, it should be noted, is now subject to a widening class divide (“Luxury Gap: How Japan Turned Into a Nation of the Haves and Have-Nots,” Independent [UK], February 6, 2008).

MR readers are aware that we have long pointed to stagnation as an ongoing trend in the advanced capitalist economies, rooted in rising income and wealth inequality, growing monopolization, and industrial maturity. This deep-seated stagnation tendency has been partially countered in the past by military spending, government deficits, and, in the last quarter-century, a structural shift from production to finance (characterized by the explosive growth of private and public debt). Such artificial stimulants enhance economic growth in the short run, but are unable to overcome the long-run, structural problem. The result is that stagnation reasserts itself like a force of gravity, as shown by recent financial crashes in 2000 and 2007-09. Despite the expansions of the late 1980s and late 1990s, the real economic growth rate of the United States (and that of most other wealthy industrialized countries) has been sinking decade by decade since the 1970s.

Is there an alternative to the current stagnation-financialization trap? In the abstract, the answer is yes, but effecting the needed changes requires radical actions, and there’s the rub. The most pressing material needs in the United States (and in all other affected countries, including Japan) are for improved conditions of health, education, housing, public transportation, equitable food distribution, and the protection of the environment. Full employment could be promoted by attending to these urgent needs. Deficit spending by government would not be a problem under current conditions of high unemployment and underutilized productive capacity. In the Second World War, new borrowing by the U.S. government went far beyond today’s levels in relation to GDP. Insofar as the new spending served to put people back to work, the whole society (with the exception of the wealthy) would end up better off. Nor would it be a problem to finance such a program in considerable part by shifting the overall tax burden toward the rich, whose relative share of income and wealth has been crowding out the rest of us. Further resources could be gained by redirecting government expenditures away from military/imperial spending and toward areas that provide real benefits for the society. In short, a radical new New Deal for the twenty-first century could—or so the argument goes—be enacted.

But to accomplish this politically via initiatives at the top, say, by the federal government under enlightened leadership, would mean enlisting the mass of the population in the radical reconstruction of U.S. society. This would generate a clear conflict with the ruling class, which none of today’s leading politicians, certainly not President Obama and his corporate-friendly coterie, are willing to consider for one moment. Nothing remotely like a new New Deal would be supported by the power elite of either the United States or the European Union under today’s regime of monopoly-finance capital. That door is closed.

Our conclusion: real hope lies in the mass of the population, on both a national and a global scale, directly taking history into its own hands, in order to create a new system beyond capitalism that genuinely serves human needs. What is called for is a massive class/social revolt from below, taking place over months, years, even decades, and not stopping short of real social transformation. Will this happen? And if it were to happen, would it succeed? No one knows. But in the absence of certainty, would it not be better to work toward this end, rather than resign ourselves to the increasingly barbaric status quo?

Capitalism is an imperialist world system. The worst hardships invariably fall on the countries of the periphery, from which the leadership in the struggle against this system has emanated for at least a century. One vital organization in this global conflict is the World Forum for Alternatives (WFA), an international network of research centers and militant intellectuals from South and North. Created in 1997, with MR author Samir Amin as its president, the WFA has organized a number of international activities/events, and introduced the famous Bamako Appeal in 2006 (reprinted in Samir Amin, The World We Wish to See [Monthly Review Press, 2008]). The WFA’s executive body consists of, along with Amin, its executive secretary, Rémy Herrera (France), and vice presidents from Latin America, Asia, Africa, the Arab world, Europe, and now North America. We are pleased to announce that in September, MR editor John Bellamy Foster agreed to serve as the vice president of the WFA from the United States. For those wishing more information, visit the World Forum for Alternatives website.

Capitalism and the Curse of Energy Efficiency
Free-Market Feminism