Dear Reader, we make this and other articles available for free online to serve those unable to afford or access the print edition of Monthly Review. If you read the magazine online and can afford a print subscription, we hope you will consider purchasing one. Please visit the MR store for subscription options. Thank you very much. —Eds.
Notes from the Editors
by The Editors
(Jan 01, 2011)
Places: Asia 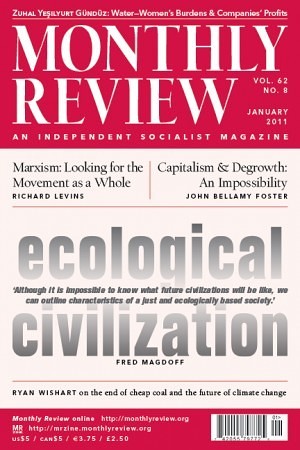 In November, Fred Magdoff traveled to Shanghai with his wife, Amy Demarest, to attend the Marxism and Ecological Civilization conference at Fudan University (see the Review of the Month in this issue). Here are some reflections from Fred about the conference, Shanghai, and China, past and present.

People attending the November 17-18 conference were from Fudan, other universities in Shanghai such as Donghua University, as well as Wuhan University, Tsinghua University (in Beijing), and Beijing University. Also attending were non-university personnel such as a representative from the Institute of World Socialism of the Central Bureau of Compilation and Translation. The only other Westerner attending was Joel Kovel, editor of the journal Capitalism Nature Socialism and contributor to MR. Many of the speakers were interested in contemporary Western Marxist thought, especially the ideas of Marx and Engels on the environment. Guo Jianren, one of those helping to organize the conference, did his doctorate on John Bellamy Foster’s work, and John’s ideas and contributions were cited many times throughout the conference. During informal discussion, a number of people mentioned how important MR and Monthly Review books have been and continue to be to them. People remember Paul and Harry. And the reaction to my recollections of Bill Hinton, called Han Ding in China, makes it clear that his contributions will be long remembered.

Although I was well aware of the sweeping changes since last being in Shanghai twenty years ago, the physical and cultural transformation is truly stunning. New elevated highways, new subway lines (quiet and clean, judging from our ride on the Number 10 line), new buses, lots of new automobiles, whole landscapes of high-rise apartments and tall commercial skyscrapers, a brand new international airport. Looking across the Huangpu River from the Bund—the natural levee near where the Western colonial powers set up shop in the nineteenth century—toward Pudong on the other side, I realized that all the buildings I was seeing were built within the last two decades. So much of the city has changed that you can almost believe you are in Paris or London or New York. Some of those attending the conference came to Shanghai on a high-speed train. A number of long-distance trains are now operating, and the 2011 opening of the Beijing-to-Shanghai route will cut the rail travel time between those cities from ten to only four hours. China is developing a network of high-speed trains, expected to cover nearly ten thousand miles by 2020.

Amy and I made a point to visit the memorial at the site of the First Congress of the Communist Party of China, held in secret in the 1920s. We saw artifacts as well as exhibits about conditions in China at the time. We read about the great famines of the late nineteenth century (see below) and the colonial intrusions and economic control, including the Opium Wars. Quite a bit of mental juggling goes on when one considers that it is the Communist Party of China that is leading the headlong rush to capitalist development. Although a considerable portion of certain industries remains state owned, the profit motive is now the driving force of the economy.

The advances are amazing, but many problems have arisen in the rush to develop. Some examples are the continued exploitation of workers (though some have gained a little bargaining power); the confiscation of land/buildings at will for development by municipal and county authorities who inadequately compensate people for the loss of their homes or livelihoods; massive pollution of air, water, soil; many industrial accidents in poorly supervised and managed projects; and the inability of the economy to absorb college graduates in work appropriate to their education. (While we were in Shanghai, a terrible incident, taking fifty-eight lives, occurred as the supposedly fire-retarding insulation being sprayed on the outside of an apartment house under renovation caught fire from a welder’s torch.)

The disparities between the new wealthy and the poor are well known by all, and the government has done some, but not nearly enough, to remedy the situation. According to a November 20 editorial in the English language China Daily, it was not surprising that “China ranks 125th on the Forbes’ gross national happiness (GNH) index…[because thirty-six million people] in China still live in extreme poverty. Economic growth amid bipolarizing income certainly cannot solve their problems. The beautification projects—taller buildings, wider roads, and bigger cities—only makes these vulnerable people invisible.” And with significant food price inflation, “such people encounter untold suffering even at the slightest rise in food prices. They suffer the most because of environment degradation, soaring housing prices and dwindling jobs, especially decent ones….The poor desperately need help. Whatever gains have been made against abject poverty risk being undone by rising food prices.”

Many people in China have long memories and are trying to pass on some of their remembrances—whether regarding recent history, in an effort to keep some of Mao’s ideas and ideals alive, or regarding the more distant past—to the young. A very good friend of ours came to the conference from Shanxi Province (the one where Bill spent much time, and where the village of Long Bow, featured in Fanshen, is located). He was a farmer and village leader during the Cultural Revolution and for many years has been an important agricultural scientist, breeding new varieties of wheat for growing in northern China. One of his current interests is to remind people of the terrible famines that struck China (as well as India and other locations) in the late nineteenth century. He told us that he heard stories about the famines from his grandfather.

For a full year, from spring of 1877 through spring of 1878—part of the era that Mike Davis discusses in his book Late Victorian Holocausts—there was no rain whatsoever. As he visited fields around the region, our friend kept an eye out for artifacts from the famine and found eight large stones carved in separate villages, describing what happened in the village during the famine. On average, in a society wracked by severe drought and weakened by integration into the system developed by Western imperialism, about 70 percent of the people died.

As they had done in India, the English industrial looms destroyed the Chinese cottage industry of spinning and weaving cotton as a source of income. Additional problems included the dwindling Chinese system of grain storage because of the financial stress of the Opium Wars, the growing trade deficits resulting from forced opium imports, the adoption by the Great Powers of the gold standard, as well as midcentury civil wars and floods. When disaster struck, even the use of cash (instead of stored grain) could not relieve the problem, because the available money couldn’t keep up with the vast price inflation—there just wasn’t enough locally available grain. The difficulty of transportation to the famine areas also made long-distance transport extremely expensive. Areas depopulated by deaths and migration at the time of the famines did not recover earlier population densities until the mid-twentieth century.

As we consider the prospects of a destabilized climate in the future, we should keep in mind that dramatic climate anomalies such as those of the late nineteenth century—like nothing that has occurred since—can devastate large regions of the world. All the more reason to do whatever we can to help educate people about the environmental harm being done to the planet by a system whose only driving force is profits, a system that must grow continually to avoid recession or depression, that views resources as infinite, and that assumes that the earth can permanently absorb all the waste we generate.

Correction: In the December issue of MR a mix-up occurred on the cover of the issue. The article by Dan DiMaggio should have been entitled “The Loneliness of the Long-Distance Test Scorer.”