Dear Reader, we make this and other articles available for free online to serve those unable to afford or access the print edition of Monthly Review. If you read the magazine online and can afford a print subscription, we hope you will consider purchasing one. Please visit the MR store for subscription options. Thank you very much. —Eds.
Notes from the Editors
by The Editors
(Feb 01, 2011)
Topics: Ecology Marxism Political Economy Stagnation 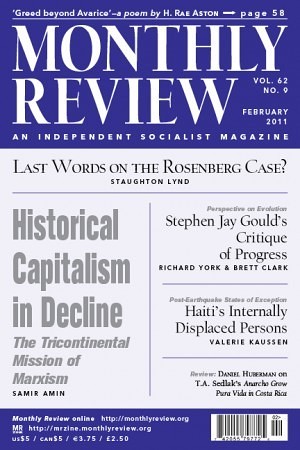 The two lead articles in this issue of Monthly Review are both outgrowths of important new books published by Monthly Review Press. Samir Amin’s article, “The Trajectory of Historical Capitalism and Marxism’s Tricontinental Vocation,” is based on recent developments in his theoretical outlook presented in The Law of Worldwide Value (New York: Monthly Review Press, 2010). A substantially revised and extended version of his earlier work, The Law of Value and Historical Materialism (Monthly Review Press, 1978), The Law of Worldwide Value also incorporates new conceptual breakthroughs, making it a major advance in itself. Amin provides, as before, an analysis that begins with Marx’s law of value, which he recognizes as “the beginning of the radical critique of modern times.” But he goes on to explain how this was transformed in significant ways with the rise and development of monopoly capitalism. “My reading of the history of capitalism,” he states, “meshes with the conclusions that Baran, Sweezy, Magdoff (and following them the Monthly Review team) have drawn from their…analysis of monopoly capitalism”—related to the production of and absorption of economic surplus (or of “surplus surplus-value”), the tendency to stagnation, and the various counters to stagnation (including the state as a “third department” and financialization).

Amin sees his own overlapping contribution as having extended the domain of this analysis to “accumulation on a world scale,” showing: (1) there are “two accumulation models”: one pertaining to the center, and one to the periphery; (2) a second moment of monopoly capitalism has led to “the late capitalism of generalized, financialized and globalized monopolies”; (3) imperialism has been transformed from primarily an outgrowth of national competition among the leading capitalist states to primarily the collective imperialism of the triad; and (4) the dominant structure of the world economy is now a system of “globalized value” governing North-South relations, characterized by the hegemony of “imperial rents.” The system of imperial rents reflects both: (a) unequal exploitation (differences in wage levels between countries that exceed the differences in productivities) generating unequal exchange; and (b) rents that are applied by capitalist monopolies/oligopolies in various ways to control planetary natural resources—today not just energy and raw materials, but even water. In this way, planetary economic and ecological contradictions are increasingly linked in our time, and tied to the North-South division as the fundamental contradiction of global capitalism.

The article by Richard York and Brett Clark entitled “Stephen Jay Gould’s Critique of Progress” is taken from their book The Science and Humanism of Stephen Jay Gould (Monthly Review Press, 2011). Gould’s far-ranging work in natural history, biology, and paleontology—even extending to the humanities and the social sciences—has fascinated countless readers, but the complexity of his thought and the extent of his intellectual commitments have defied previous attempts to bring out the unity of his work. In a book that promises to spark renewed interest in his thought, York and Clark explore Gould’s insights into “the tempo of historical change, the structural underpinnings of order in nature, the contingent character of history, and the multilevel character of natural processes.” They reveal how Gould’s humanism is manifested in his critique of reductionism, biological determinism, and teleology, as well as in affirmation of (contingent) human equality, and the exercise of freedom in human history. They thus draw out Gould’s relevance to the social sciences and humanities as well as the natural sciences. Gould’s perspective, we learn, points to the autonomy of the natural and human sciences, while insisting on their connections—hence his work is unstintingly dialectical and revolutionary in its implications. As Noam Chomsky has written of The Science and Humanism of Stephen Jay Gould: “This thoughtful and perceptive presentation of the remarkable work of Stephen Jay Gould is most welcome. With skill and insight, the authors elucidate Gould’s contributions to evolutionary theory and to the understanding of the interactions of science and human life.”

Readers who were intrigued by Fred Magdoff’s article on “Ecological Civilization,” in the January issue of MR, will also be interested in the new book Agriculture and Food in Crisis: Conflict, Resistance and Renewal, edited by Fred Magdoff and Brian Tokar (Monthly Review Press, 2010). In addition to the editors, the contributors to this volume include: Miguel A. Altieri, Mara Baviera, Walden Bello, Deborah Fahy Bryceson, William Camacaro, Eric Holt-Giménez, April Howard, Frederick Kirschenmann, Philip McMichael, Sophia Murphy, Utsa Patnaik, David Pimentel, Jules Pretty, Peter Rosset, Christina Schiavoni, and John Wilkinson. Agriculture and Food in Crisis explores the frightening trends in the world’s for-profit, agribusiness food system—as well as well as alternative forms of agriculture promoted by the world food sovereignty movement. This book and the others mentioned above can be obtained by going to Monthly Reveiw Press or by calling 800-670-9499.

We would like to congratulate our friend and MR author David Harvey for receiving the 2010 Isaac and Tamara Deutsher Prize for his book, The Enigma of Capital and the Crises of Capitalism. This is a well-deserved award.

David Noble, who died last December 27 aged 65, was one of the leading thinkers—along with Harry Braverman in his seminal Labor and Monopoly Capital (Monthly Review Press, 1974)—who, beginning in the 1970s, challenged the development of the capitalist labor process. In 1977 David published his path-breaking America By Design, focusing on engineers and the technology of the labor process. He followed this in 1984 with the magisterial, Forces of Production. In May 1998 he participated, along with Harry Magdoff, John Bellamy Foster, Michael Yates, Joan Greenbaum, and others in a conference at the State University of New York at Binghamton on “Work, Difference and Social Change: Two Decades After Braverman’s Labor and Monopoly Capital.” Discussions begun then led to the publication of his Digital Diploma Mills: The Automation of Higher Education (Monthly Review Press, 2001). In its obituary the [Toronto] Globe and Mail, described him as “one of North America’s most prominent critics of the corporatization of academia, and a groundbreaking researcher on the influence of technology on society.” David taught history at MIT and later at York University in Toronto. Unlike most academics, he was uncompromising in his opposition to injustice, to the point of extending his critique of the modern labor process to the academic environment in which he worked. The radical challenge to his own work environment resulted in his being treated as a gadfly and troublemaker, and negatively affected his standing in the academy, but he never hesitated to voice his principled opposition.