Dear Reader, we make this and other articles available for free online to serve those unable to afford or access the print edition of Monthly Review. If you read the magazine online and can afford a print subscription, we hope you will consider purchasing one. Please visit the MR store for subscription options. Thank you very much. —Eds.
Notes from the Editors
by The Editors
(Mar 01, 2011)
Topics: Economic Theory Labor Political Economy 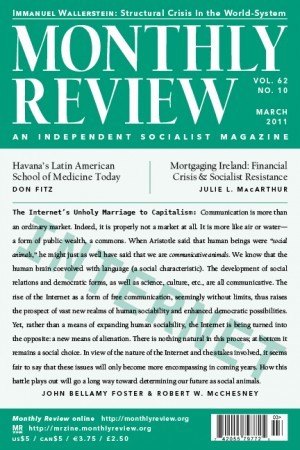 In the United States, it is now three years since the “Great Recession” began, and twenty-one months since it officially ended. Whether or not the end of the Great Recession means that the economy is now on the way to sustained recovery is another matter. Wall Street has rebounded dramatically, as have corporate—and especially financial sector—profits, but for ordinary men and women, circumstances are nearly as troubling today as they were at the bottom of the downturn in June 2009.

The January employment report from the Bureau of Labor Statistics (BLS) shows an unemployment rate of 9.4 percent for December 2010, which represents about 14.5 million people. This was down from 9.8 percent in November. However, if there had been no dropouts from the labor force (by virtue of people having become discouraged enough to stop searching for jobs) between November and December, the unemployment rate would have remained at 9.8 percent. If we were to count those dropouts, along with other “marginally attached” workers, as unemployed, and add the part-time workers who desire full-time work, we would get an expanded measure of labor market distress—the underemployment rate (“U6” in BLS parlance), which in December was 16.7 percent, or 26.1 million persons. In June 2009, it was 16.6 percent. So nearly two years after the recovery began, we have the same amount of actual labor market misery.

These overall rates hide great variability—by duration, race and ethnicity, and age. Six million four hundred thousand workers have been officially unemployed for longer than six months, an incredible 44.3 percent of all the officially unemployed, down only slightly from the post-Second World War high of 45.6 percent hit in May 2010. And there are millions of workers who have been unemployed for at least a year; a recent New York Times article cites evidence that the re-employment rate—the chance that these people will find a job in the next month—is a meager 8.7 percent. It is 30.7 percent for those unemployed fewer than five weeks (Catherine Rampell, “Unemployed and Likely to Stay That Way,” December 2, 2010, http://nytimes.com).

So-called minorities have been hit hardest by the crisis. In December, black and Latino workers had official unemployment rates of 15.8 and 13.0 percent, respectively. The rate for workers of all races between ages sixteen and twenty-four was 18.1 percent—particularly troubling because young people are being denied the initial entry into the workforce so essential to their future economic well-being. Young nonwhite men and women are experiencing unemployment rates that defy belief. For example, black teenagers had an unemployment rate of 44.2 percent. A recent study conducted by the Community Service Society of New York (Unemployment in New York City During the Recession and Early Recovery, http://cssny.org) found that the average unemployment rate for black, non-Hispanic men sixteen to twenty-four in New York City, during the eighteen months between January 2009 and July 2010, was 33.5 percent. Their labor force participation rate—the share of the working age population in the labor force—was a minuscule 38 percent, meaning that a high proportion of New York City’s black youth has dropped out of or never entered the labor force. Most startling was that only one in four were employed at all.

The BLS data cited above are from the monthly survey of about sixty thousand households. The BLS also conducts a survey of about four hundred thousand businesses to obtain information about employment gains and losses. The economy has been adding jobs for several months, but not nearly enough to reduce the unemployment rate significantly. The Economic Policy Institute tells us that

While the labor market is now adding jobs, it remains 7.2 million payroll jobs below where it was at the start of the recession three years ago. And even this number understates the size of the gap in the labor market by failing to take into account the fact that simply keeping up with the growth in the working-age population would require the addition of another 3.7 million jobs in those three years. This means the labor market is now nearly 11 million jobs below the level needed to restore the pre-recession unemployment rate (5.0% in December 2007). [Heidi Shierholz, “Labor Force Smaller than before Recession Started,” January 7, 2011, http://epinet.org]

The grim labor market news is matched by the statistics on poverty and inequality. A record number of people, 43.6 million, now live in poverty, and nineteen million of these have annual incomes less than one-half of the poverty level, an amount equal to $10,977 for a family of four. Income inequality keeps getting worse, as most of the gains in national income now go to the richest 1 percent of households.

The federal government’s response to the continuing depressed conditions of the nation’s working men and women has mimicked the propaganda emanating from the wealthy and their media puppets. Capital wants to go in for the kill, eliminating the last bastions of working-class security and power: social security and public sector labor unions. President Obama appointed two vicious opponents of social security to his deficit reduction commission, and the media are full of attacks on public employees. There is no evidence that social security will soon be insolvent, or that public employees are overpaid and unproductive. But as editor John Bellamy Foster recently argued on the Public Broadcasting Service, “It doesn’t seem to matter to those making such charges that all of this is false—as long as they have the power to spread such misinformation and people are sufficiently gullible” (“Public sector workers are a ‘privileged new class,’ says billionaire,” January 17, 2011, http://pbs.org).

This gullibility may be short-lived. Day-to-day pressures on the working class have become severe, and there is a ready audience for truthful explanations.

Associate Editor Michael D. Yates taught a two-week class this January in Labor Economics to students in the Union Leadership and Administration program of the University of Massachusetts at Amherst. He began teaching this course in 1997 and reports that Marx’s analysis of capitalism has never been more popular among his trade union pupils. Hopefully, they will return to their unions and spread the word. To encourage this, Michael will give each member of his class a gift subscription to Monthly Review. He suggests that readers take his lead and give gift subs to their friends, coworkers, and family members. They are a bargain at $29. Visit the MR store to give a gift sub.