Dear Reader, we make this and other articles available for free online to serve those unable to afford or access the print edition of Monthly Review. If you read the magazine online and can afford a print subscription, we hope you will consider purchasing one. Please visit the MR store for subscription options. Thank you very much. —Eds.
Notes from the Editors
by The Editors
(Apr 01, 2011)
Topics: Economic Theory Movements Political Economy Stagnation 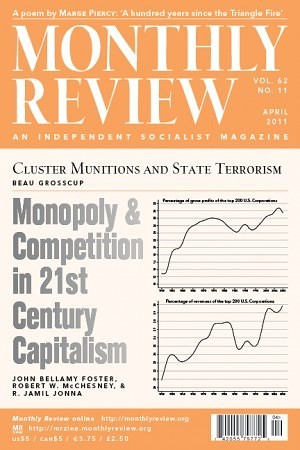 This year marks the forty-fifth anniversary of the publication of Paul Baran and Paul Sweezy’s classic work, Monopoly Capital: An Essay on the American Economic Order (Monthly Review Press, 1966). Three years before the publication of their book, in the July 1963 issue of Monthly Review, Baran and Sweezy published two chapters of Monopoly Capital in MR, together with an introduction. (The publication of the actual book was delayed by Baran’s death in 1964.) Today MR editor John Bellamy Foster and Robert W. McChesney are currently completing a book, entitled Monopoly-Finance Capital: Politics in an Era of Economic Stagnation and Social Decline, to be published by Monthly Review Press early next year. The purpose of this new work is to bring the analysis of Monopoly Capital up to date, addressing the changes that have occurred in the capitalist system in the last half-century. We have therefore decided to follow the example of Baran and Sweezy and publish a number of the core chapters of this book, in early form in the magazine, in advance of the book itself. The March 2011 Review of the Month, “The Internet’s Unholy Marriage to Capitalism,” was one such chapter. This issue’s Review of the Month, “Monopoly and Competition in Twenty-First Century Capitalism” (co-written by Foster and McChesney with R. Jamil Jonna), is another.

As a result, this month’s lead article is longer and more challenging than most articles that we publish in the magazine. But we believe MR readers will appreciate having a prior look at our attempt to explain the role of growing monopoly power in today’s capitalism, and at the deep critique of neoliberalism this generates. As Baran and Sweezy observed in their introduction to MR’s July 1963 issue: “The fact that the monopolistic (or oligopolistic) concern has become the dominant entity in the modern capitalism system has an overriding significance for an understanding of the system’s modus operandi.” Today, almost fifty years later, this is truer than ever before.

The end of January 2011 marked the tenth year since the first World Social Forum (WSF) in Porto Alegre, Brazil. The organizing committee of Brazilian groups originally set out, in April 2001, a “Charter of Principles” as a guide to future gatherings. The Charter commenced by defining the WSF as an “open meeting place for reflective thinking, democratic debate of ideas, formulation of proposals, free exchange of experiences and interlinking for effective action, by groups and movements of civil society that are opposed to neoliberalism and to domination of the world by capital and any form of imperialism, and are committed to building a planetary society directed towards fruitful relationships among Humankind and between it and the Earth.” Ever since, a WSF has gathered in late January or early February, consciously timed to coincide as an open negation of the more-or-less simultaneous Davos “World Economic Forum”—the meeting of the system’s leading figures, and in some sense the headquarters, of capitalist globalization.

In this last decade of successive World Social Forums, we have followed the progress of the movement with optimism and solidarity. But we also have harbored some qualms, not least from the prominent role that so-called nongovernmental organizations (NGOs) came to assume in funding the meetings—and, as it sometimes appeared, in setting its agenda. As our friend James Petras pointed out in “Imperialism and NGOs in Latin America”, NGOs, well funded from sources located in the leading imperialist states, played a significant role in the stabilization of neoliberal regimes in the third world, preempting local organizing by revolutionary forces and co-opting emerging leaders with attractive employment opportunities, while prattling of “social responsibility,” “environmental justice,” and so on. These objectives were, of course, important but had no chance of coming to be in any meaningful way, he suggested, except through revolutionary opposition to the system itself.

In the years since the prescient article by Petras, we have seen yet more sinister use of NGOs, with the CIA surrogate “National Endowment for Democracy” and similar U.S. intelligence-funded outfits mobilizing various NGOs to speak for a nebulous “civil society” while attacking chosen U.S. “evil” enemies of the moment—most notably in recent years in relation to Chávez’s Venezuela. Although there are certainly many worthy NGOs flowing out of the left, those with the deepest pockets have either capitalist or state interests behind them. Taking the most sanguine view, it seems reasonable to question how significant an opposition to the “domination of the world by capital” could be from meetings funded by the Ford Foundation or, for that matter, Petrobras. And we can be sure that the billionaire and centomillionaire funders of leading NGOs are not organizing their own expropriation.

Nonetheless, the World Social Forum movement is seen as a critical agent of global anti-capitalist and anti-imperialist change by some of our closest friends and associates, notably Immanuel Wallerstein and Samir Amin, and we give their judgment the greatest weight. In 2006 MR editor John Bellamy Foster attended the World Social Forum at Bamako in Mali, and reported back with enthusiasm on the meeting, and on the “Bamako Appeal”—the product of a gathering of activists and intellectuals organized in connection with the Bamako WSF by the Third World Forum/Forum for Alternatives and its director, Samir Amin.

The 2011 World Social Forum took place at Dakar, Senegal from February 6 to 11. MR decided to send a team composed of editorial committee member, and Monthly Review Foundation officer and director, John Mage, and our frequent contributor and good friend Roxanne Dunbar-Ortiz. We took the opportunity not least as an homage to Samir Amin, who is based in Dakar, will celebrate his eightieth birthday in September, and was scheduled to play a central role in the gathering.

John and Roxanne report that they spent most of their time at sessions organized by Third World Forum/Forum for Alternatives that focused on the practical aspects of building South-South cooperation and, indeed, coordination. Three well-attended sessions daily featured participants from China, Vietnam, Malaysia, Indonesia, India, South Africa, many West African countries, Egypt, Brazil, Bolivia, and Cuba. The audience was dominated by West African activists and students, and the exchange was lively and productive. A shared anti-capitalist and anti-imperialist point of view was an assumed starting point, and Samir Amin’s presence and participation unified and clarified every discussion. The warm appreciation expressed again and again for Monthly Review was gratifying, in almost all cases a result of familiarity with the MR Web site and MRzine.

A high point was a general meeting of social activists—in contrast to the NGOs—present at the WSF. Egyptian events naturally dominated attention in those charged days, and the activists came together to issue a vigorous declaration of support for the Egyptian revolution, and a stern denunciation of U.S. imperialism and global capitalism. During the assembly, the news came of Mubarak’s resignation—as it later developed, premature by a day—and the assembly broke into an outpouring of joy. The Egyptians present were pushed up to the podium, and some among them had tears in their eyes.

Apart from those of the Third World Forum/Forum for Alternatives, there were, of course, many meetings scheduled, but John and Roxanne observe that their few attempts to attend other sessions were frustrated by stupendous disorganization—reportedly the result of last-minute obstructions from a very non-cooperative Senegal government. The NGO presence was visible, though their only direct experience was of a sullen German Green, holding forth on the virtues of “free markets” and anti-communism, apparently conscious of how out of tune he was with the dominant spirit of the gathering. In summary, the earlier NGO nursery atmosphere is dissipating, and South-South activists are well on their way to coordinating their own gatherings and setting their own agenda. In the words of the Third World Forum/Forum for Alternatives, the time has come that “the South thinks and acts for itself.”

The MRzine Web site was inaugurated on July 14, 2005, and early on included events in North Africa and the Mideast in its focus. In the intervening years there have been many occasions when countries among the most frequent points of origin of visitors to the site have been Turkey, Iran, or Egypt. But for a moment in February, MRzine played a role in events qualitatively different from anything that had gone before. The Bahrain government attempted to block internet access to videos and accounts of events in the early stages of the revolutionary movement. MRzine escaped their notice, and for an important day or two its coverage of events was one of the few available in Bahrain. On one day in mid-February records of MRzine internet usage showed more visitors from Bahrain’s capital Manama—population 155,000—than from any other city in the world, and indeed from any country other than the United States.