Dear Reader, we make this and other articles available for free online to serve those unable to afford or access the print edition of Monthly Review. If you read the magazine online and can afford a print subscription, we hope you will consider purchasing one. Please visit the MR store for subscription options. Thank you very much. —Eds.
Notes from the Editors
by The Editors
(Jun 01, 2012)
Topics: Feminism Literature Philosophy Political Economy Stagnation 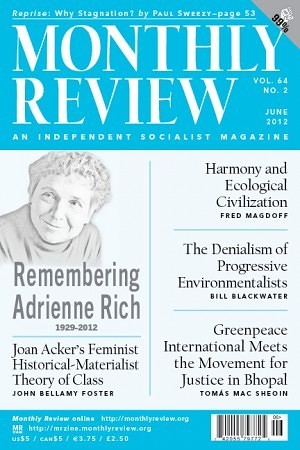 If you are trying to transform a brutalized society into one where people can live in dignity and hope, you begin with the empowering of the most powerless. You build from the ground up.

By any measure, Adrienne Rich lived an exemplary life. When she died last March 27, aged eighty-two, she was acknowledged by many critics as perhaps this country’s foremost poet. But she was also a fully engaged radical, committed to battles against imperialism, the subjugation and exploitation of women, and oppression of any sort wherever she found it. Informed by those experiences, she was a lifelong socialist. It was through this prism she lived her life, experienced growth, change, crisis—and flowered as a poet and essayist.

When she entered Radcliffe College in 1947, she encountered a world quite different from this one. In the aftermath of the Second World War, old colonial empires appeared to be tottering; in the industrial West workers and people of color organized for change; and, in the wake of the war’s violence and the Depression that preceded it, the first glimmerings of the transformation of human relations could be seen. It was at Radcliffe that she met the great literary historian Francis Otto Matthiessen who, as she said on the fiftieth anniversary of Monthly Review, “reminded us that there was a world outside of Cambridge and Harvard and Radcliffe, a world of war-torn, postwar Europe, in which many things might be possible, many great changes, and that these matters were of concern to us.” Rich was moved by Matthiessen’s radical sensibility, by his commitment to change the world as he saw it. Matthiessen, having provided the funds for the founding of MR had, unknowningly, also contributed to the launch of Adrienne Rich’s life as writer and activist. Matthiessen, she said, “never let us forget that poetry lives in a social world.” She took every course that Matthiessen offered, disabusing herself of the idea that imaginative literature could find validation only in some formal, self-referential aesthetic that lived outside the world of everyday life and history—what was then the dominant reactionary view called the New Criticism.

In the 1960s she, her husband, and their three sons moved to New York, where she was immediately swept up in local and national civil rights struggles, the anti-Vietnam War protests, and the emergent women’s movement. Always eager to address struggle personally, she taught in New York’s City University Seek for Education, Elevation, and Knowledge (SEEK) program, which aimed to prepare poor and working-class pupils for higher education, teaching them skills they had been denied by the de facto segregation of the academy. Unflinching in her examination, not only of the world around her, but also of her own life, by 1970 she ended her marriage and came out as a lesbian. Always an impassioned writer, she chronicled her evolution in an increasingly clear, assertive, and imaginative voice in her poems, some of which first appeared in Monthly Review. From 1976 on, she was the partner of the novelist Michelle Cliff.

Rich’s essay “Compulsory Heterosexuality and Lesbian Existence,” which was published in Signs in 1980 and included in the anthology Powers of Desire, edited by Marxist-feminists Ann Barr Snitow, Christine Stansell, and Sharon Thompson (Monthly Review Press, 1983) became a defining work for feminist thought. For a number of years Rich carried on a correspondence with Snitow, Stansell, and Thompson with regard to the issues raised in her essay and later published excerpts from this correspondence when she reprinted the article in her prose collection, Blood, Bread and Poetry, in 1986. In that correspondence she presented her own, more universal version of what Marxists have sometimes called “false consciousness” or what she preferred to call “control of consciousness.” “My essay,” she wrote, “is founded on the belief that we all think from within the limits of certain solipsisms—usually linked with privilege, racial, cultural, and economic as well as sexual—which present themselves as ‘the universal,’ ‘the way things are,’ ‘all women,’ etc., etc. I wrote it equally out of the belief that in becoming conscious of our solipsisms we have certain kinds of choices, that we can and must re-educate ourselves.”

Throughout her writing life, Adrienne Rich’s vision of a better world was clear. In her 2008 collection A Human Eye: Essays on Art in Society Rich claimed Che Guevara, Karl Marx, and Rosa Luxemburg as defining heroes. It did not matter if she was speaking to a room full of undergraduates or, having made the long painful climb up the hill to the Women’s Correctional Facility in Bedford Hills, New York, to teach poetry to its inmates, Adrienne’s voice was trenchant. So it was not surprising that when the commercial media ran obituaries of her, they sanitized her life and work, giving more emphasis to her awards than her work, characterizing her as angry rather than radical. At MR however, we preferred to hear her words: “Responsibility to yourself means refusing to let others do your thinking, talking, and naming for you; it means learning to respect and use your own brains and instincts; hence, grappling with hard work” (from “Claiming an Education,” 1977).

In this issue we are reprinting Paul Sweezy’s article “Why Stagnation?,” first published in MR thirty years ago in June 1982 (originally a talk given to the Harvard Economics Club on March 22, 1982). We think that this talk, which could be described today as a classic, is a powerful commentary on our present reality, and we hope will be of interest to a new generation.

J. Quinn Brisben, whose review appears in this issue of MR, died on April 17, 2012, at age 77. He ran as the Socialist Party USA candidate for President of the United States in the 1992 general election, and was a longtime activist and teacher. He was also a poet interested in cultural as well as political themes. In the 1990s he emerged as one of MR’s most treasured cultural and political reviewers, reviewing E.P. Thompson’s posthumous work on William Blake (MR, September 1994), Roxanne Dunbar Oritz’s Red Dirt (MR, December 1997), along with reviews of a number of other books. His review, “Breaking the Mind-Forg’d Manacles,” of Thompson’s book on Blake captured many of the lyrical qualities of Blake as well as Thompson’s own indelible style, while Brisben offered something all his own. As he wrote: “To break ‘the mind-forg’d mancles’ which enslave us to state or church, economic despotism or lying media, we need hallowed slogans affirming our ancient rights, great tales of heroic vision and resistance, a precise and evocative language in which to express our anger and desire, the whole extent of that lovely oxymoron ‘revolutionary tradition.’”