Dear Reader, we make this and other articles available for free online to serve those unable to afford or access the print edition of Monthly Review. If you read the magazine online and can afford a print subscription, we hope you will consider purchasing one. Please visit the MR store for subscription options. Thank you very much. —Eds.
Notes from the Editors
by The Editors
(Oct 01, 2012)
Topics: Education 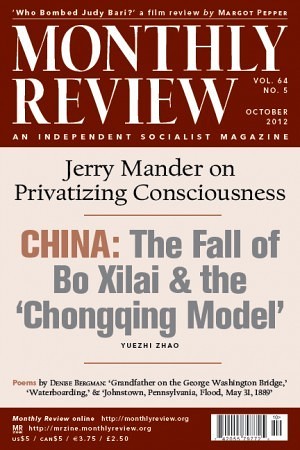 In universities today research, promotion, and tenure are increasingly based on publication in peer-reviewed academic journals. These journals are supposed to constitute the highest level of intellectual inquiry in the disciplines they represent. Yet, they are being transformed more and more into commodities subject to capitalist market conditions, subverting their purpose. Academic journal publication is now an oligopolistic industry with the five biggest commercial publishers accounting for about 40 percent of a $10 billion sector. Commercial academic journal publishers charge between three and nine times as much per page as scholarly society journals. Between 1970 and 1997 academic journal prices increased by a factor of thirty, growing by an average annual rate of more than 13 percent. Consequently, commercial publishers in this sector are currently reaping outsized profit margins on the order of 30–40 percent (Armin Beverungen, Steffen Böhm, and Christopher Land, “The Poverty of Journal Publishing,” Organization, pre-publication online version, August 8, 2012; “Open Sesame,” The Economist, April 14, 2012).

Nevertheless, O&E is now approaching its end as a critical environmental journal, falling victim to a corporate-engineered editorial coup which has transformed it almost overnight from an “ecosocial” journal into a “sustainability management” journal, without the prior knowledge of its present editors (Jermier and York) or most of its editorial board. O&E is now to be edited (beginning in 2013) by Mark Starik, incoming president of the Group on Organizations and the Natural Environment (GRONEN, an academic organization geared to environmental management based in Europe), and by J. Alberto Aragón-Correa, professor of strategic management at the University of Granada (Spain). The journal is to be sponsored by GRONEN and will be explicitly geared to ecological modernization (green capitalism), largely excluding critical environmental analysis and environmental sociology from its pages.

Although Jermier and York were both in the process of stepping down as editors of O&E, they were working out a plan with SAGE for a smooth transition to a new editorship—to be carried out in conjunction with the current editorial board. However, other arrangements were simultaneously being made behind their backs. SAGE, the world’s fifth largest journal publisher, publishing some 645 academic journals, decided to employ its ownership rights over O&E to shift both its editorial control and academic mission (http://www.uk.sagepub.com). Thus the journal was handed over to GRONEN, and to Starik and Aragón-Correa as the incoming editors. Protests by most of O&E’s current and former editors as well as by many members of the editorial board were ineffectual. They were told that it was already a done deal, while many of the details of the transition (such as the names of the incoming editors) were kept from them until well into the process. Nor were they able to negotiate any sort of compromise.

SAGE advertises itself as an “independent publisher” committed to intellectual freedom. But none of this means much when it conflicts with its own accumulation model. SAGE has 1,100 employees and operates as a multinational. It has a strong oligopolistic position with respect to business, management, and social science journals. It publishes eleven out of twenty-nine organizational studies journals (including O&E), and is the predominant publisher of sociology journals, including all of the key journals of the American Sociological Association. Each of the academic journals it publishes—for which it provides little other than the copyediting and digitalization, since the content is provided by the authors and journal editors working virtually for free—is a profit-generating machine. What few production costs remain are increasingly outsourced to India or elsewhere. For a single library to obtain a subscription to O&E, which provides it with electronic access (there is no longer a print edition) to the four issues of the journal each year plus the backlist, it must pay $749 annually, according to SAGE’s 2012 journal price list. In the words of SAGE CEO, Blaise Simqu: “For the last 15 years, SAGE has done nothing but grow” (“Simqu: Leading the Change at SAGE Publications,” Information Today, June 2011).

SAGE’s takeover of O&E’ s editorship and the transfer of it to GRONEN were undoubtedly carried out primarily for economic reasons, despite the profitability of the journal up to now. GRONEN offered a much expanded subscription base for O&E, promising enhanced revenues. Moreover, bundling O&E with other business, management, and organization journals was made more difficult by O&E’s critical orientation. Finally, O&E was often explicitly antagonistic to business culture, which was at best an annoyance. Since O&E was fully owned by SAGE the obvious profit-making decision was to hand over the journal to editorial interests more congruent with SAGE’s long-term economic objectives.

This was not the first time that SAGE had sought to implement such an editorial coup to promote its objectives. A similar case occurred in relation to the journal Political Theory in 2009, when SAGE replaced an existing editor with another seemingly more in line with SAGE’s business plans without consulting the editorial board. In that case, however, political theorists learned of the editorial coup early in the process and responded publicly and aggressively, taking advantage of a number of blogs to circulate their objections, with hundreds of irate posts. This drew attention from the influential Chronicle of Higher Education. The result was that the new editor dropped out and SAGE backed down, presenting the whole matter as a “misunderstanding,” and reverting to the status quo ante (Scott Jaschik, “Who Controls Journals?” Inside Higher Ed, July 7, 2009; “What’s Up With Political Theory?” Crooked Timber, July 2, 2009; “Political-Science Journal and Its Publisher Reach New Détente,” The Chronicle of Higher Education, July 7, 2009; Barbara Fister, “Mistakes Were Made,” Library Journal, July 9, 2009).

In contrast, the 2012 O&E coup was handled much more deftly on SAGE’s part with greater secrecy and organization. Moreover, concerned members of the O&E board made the fatal error of seeking to negotiate with SAGE management and with GRONEN privately on their own terms, rather than going public over the coup. SAGE and GRONEN were thus left holding all the cards and treated their transition plan as a fait accompli. In this way, the for-profit business model and the “sustainability management” intellectual agenda prevailed.

The first issue of the new corporate-oriented, green-capitalist O&E is now scheduled for March 2013.

Alexander Saxton, who died last August 20, aged ninety-three, was a socialist activist all of his adult life and a longtime reader of Monthly Review. Monthly Review Press published his Religion and the Human Prospect in 2006. Saxton’s early career was as a novelist, producing his acclaimed novel Grand Crossing in 1943 when he was twenty-four. Later, as an academic historian, he wrote, in 1990, The Rise and Fall of the White Republic, one of the founding works of whiteness studies, dealing with the history of U.S. white racism. During the Second World War he served as a merchant mariner and was a member of the militant National Maritime Union. After the war he became an organizer for the International Longshoremen’s and Warehousemen’s Union (ILWU) in the San Francisco Bay Area. Subpoenaed to testify before the House Committee on Un-American Activities in the mid–1950s, he refused to cooperate. In a 2010 interview with Jonah Raskin Saxton declared: “Marxism is the mother lode for all critiques of capitalism.” Asked what he would say to young activists today he replied: “I would quote Gramsci: Your task is to locate the point where pessimism of the intellect coincides with optimism of the will” (“Marxism Is the Mother Lode for all Critiques of Capitalism: An Interview with Alexander Saxton,” MRZine, October 5, 2010).

Corrections: On both the cover and page 60 of MR, September 2012, there was an error in the title of Howard Waitzkin’s book; the correct title is Medicine and Public Health at the End of Empire.