Dear Reader, we make this and other articles available for free online to serve those unable to afford or access the print edition of Monthly Review. If you read the magazine online and can afford a print subscription, we hope you will consider purchasing one. Please visit the MR store for subscription options. Thank you very much. —Eds.
Notes from the Editors
by The Editors
(Nov 01, 2012)
Topics: Education Movements Political Economy Stagnation 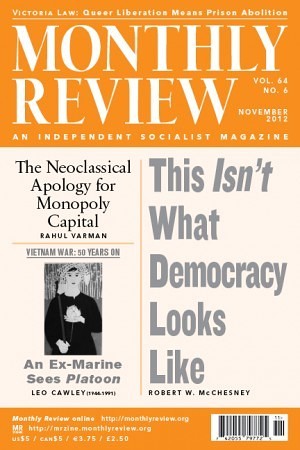 In “Education and the Structural Crisis of Capital,” written for the special July-August 2011 issue of Monthly Review on education, John Bellamy Foster stated:

In the past few decades the response of the nation’s overworked teachers to “the ravages of society” and the accompanying attacks on schools has usually been to use what energy they had on helping their students, while avoiding organized political activity. But this may be changing. Today political resistance around schools from teachers, parents, students, and community members seems to be emerging at long last in the United States—though it is too soon to know what this portends.

Already in 2010, Karen Lewis, a high school chemistry teacher and the leader of the Caucus of Rank-and-File Educators (CORE), won an upset election to become president of the Chicago Teachers Union, deposing the two-time, old-guard incumbent. This emanated from a desire on the part of Chicago teachers, in Arne Duncan’s hometown, to fight for their jobs, working conditions, and the future of education for their students. CORE arose as a grassroots rebellion against Duncan’s Chicago “turnaround” legacy of school closings and the charterizing of schools. It therefore represents a turn away from a business union structure, toward a more politicized union.

From September 10–18, 2012, this new rank-and-file-led Chicago Teachers Union went on strike in what is the third-largest school district in the nation with some 350,000 students. The strike drew widespread local support in a struggle that quickly grabbed the attention of the entire country. Working-class communities in Chicago came massively to the aid of the strikers. More than a strike simply over wages, teachers were fighting against the corporatization, privatization, and degradation of schools, including: education cutbacks; school closings; teacher layoffs; merit-based pay and removal of teacher-seniority protections; loss of benefits; increased class sizes; shortages of textbooks and equipment; longer school days and longer working hours for teachers; excessive testing; teacher evaluation based mainly on student test scores (the so-called “value added” system promoted by Chicago Mayor and former Obama White House Chief of Staff Rahm Emanuel and by Secretary of Education and former CEO of the Chicago Public Schools Arne Duncan); the imposition of an increasingly standardized, corporate-derived curriculum; the charterization of schools; and a highly segregated school district.

The Chicago teachers won a number of partial victories as a result of the strike, including: (1) wage gains to compensate for longer hours associated with longer school days; (2) pushing merit pay off the bargaining table and maintaining traditional seniority, with higher pay for experience and advanced degrees; (3) limiting the pernicious “value-added” evaluation system (which will count no more than 30 percent in teacher evaluation as opposed to the 45 percent demanded by Emanuel and his allies on the school board, and will now be subject to appeal); (4) stipulating that teachers in schools that are closed have the right to follow their students to the new schools (important since Emanuel and his cronies are planning to close as many as 100 of the 681 Chicago Schools), that laid-off teachers will have ten months of recall rights if their old positions are reinstated, and that at least half of all new job openings must be filled by laid-off teachers; (5) the hiring of 600 new teachers in art, music, and physical education; (6) break time for teachers who are nursing mothers; (7) reimbursement when teachers buy supplies for their students, up to $250; and (8) a guarantee that students will get their textbooks on the first day of school (Theresa Moran, “Chicago Teachers Raise the Bar,” Labor Notes, September 19, 2012; Peter Brogan, “7 Days that Shook Chicago,” the Bullet, http://socialistproject.ca/bullet/).

This struggle over elementary and secondary education, in which teachers and teachers unions, supported by larger communities, are now beginning to take a determined stand against the privatization of public education, is at the very heart of class/social conflict in the United States today. Moreover, neoliberal attacks on public education are now occurring on a global level. Consequently, we intend to devote added attention to the battle over K–12 education in future issues of MR. For those interested in this question a useful collection of essays is to be found in Jeff Bale and Sarah Knopp, eds., Education and Capitalism: Struggles for Learning and Liberation (Chicago: Haymarket, 2012).

The reprinting in this issue of Leo Cawley’s 1987 review of Oliver Stone’s film Platoon marks the first entry in an occasional series of reprints, articles, and brief commentaries on the Vietnam War that we plan to print in MR parallel to but contrasting sharply with the official Commemoration of the 50th Anniversary of the Vietnam War to be conducted by the U.S. government under the auspices of the Department of Defense over the next thirteen years. For further details see the Notes from the Editors in the September 2012 issue of MR.

Farooque Chowdhury, who is closely associated with Bangla Monthly Review for which he frequently translates MR articles, has recently edited a book of interviews by John Bellamy Foster entitled, The Great Financial Crisis, What Next? For information write to farooque_chowdhury [at] yahoo.com or booksjan2012 [at] gmail.com.

MR readers may be interested to know that John Bellamy Foster and Robert W. McChesney’s new book, The Endless Crisis: How Monopoly-Finance Capital Produces Stagnation and Upheaval from the USA to China, now just out from Monthly Review Press, had, as of September just prior to its release, already attracted considerable pre-publication notice in the media. Larry Elliott, economic editor for the Guardian, provided a brief summary of the core thesis of the book in an article entitled “Eurozone Ignoring Parallels with Latin American Debit Crisis of the 1980s” (Guardian, August 19, 2012). Eric Reguly, writing for the Toronto Globe and Mail (“How Do Downturns End? Think Beyond the Big Stall,” September 7, 2012) called the introduction to The Endless Crisis (referring to its original article version) a “data-packed” analysis and went on to underscore its point that “stalled economies may be the new normal.”

Correction: On page 63 of the October 2012 NFTE, Alexander Saxton’s first name was incorrectly given as “Andrew.”

This Isn’t What Democracy Looks Like
The Anthropology Wars