Dear Reader, we make this and other articles available for free online to serve those unable to afford or access the print edition of Monthly Review. If you read the magazine online and can afford a print subscription, we hope you will consider purchasing one. Please visit the MR store for subscription options. Thank you very much. —Eds.
Notes from the Editors
by The Editors
(Jan 01, 2013)
Topics: Ecology Education 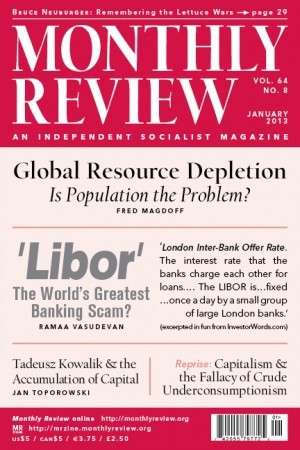 As Fred Magdoff notes in his article in this issue, the Royal Society of London—one of the world’s oldest (founded in 1660) and most respected scientific bodies—declared in its 2012 report, People and the Planet, that the environmental threat to the planet as a place of human habitation is now so serious that it is necessary for humanity to “develop socio-economic systems and institutions that are not dependent on continued material consumption growth.” In other words, a radical break with capitalism’s laws of motion is called for.

Behind this startling conclusion on the part of the Royal Society lies a nascent revolt of climate scientists against the dominance of capitalist economics in determining climate-change policy. Thus Kevin Anderson and Alice Bows of the Tyndall Centre for Climate Change Research at the University of Manchester published a 2011 article on “Beyond ‘Dangerous’ Climate Change” in the Philosophical Transactions of the Royal Society which argued that the impacts associated with the 2°C threshold have now been revised upwards, so that what had earlier been seen as marking the threshold “between acceptable and dangerous climate change,” is now recognized as representing the threshold “between dangerous and ‘extremely dangerous’ climate change”—of the kind threatening the survival of humanity. Yet, according to their argument, scientists, in an effort to accommodate themselves to the economic status quo, have downplayed this fact, as well as the fact that existing national commitments with respect to the 2°C threshold cannot possibly prevent extremely dangerous climate change—since realistic assessments would require a break with “the primacy of economic growth” and the implementation of radical socioeconomic changes. “Put bluntly, while the rhetoric of policy is to reduce emissions in line with avoiding dangerous climate change, most policy advice is to accept a high probability of extremely dangerous climate change rather than propose radical and immediate emission reductions.”

More recently, Anderson and Bows declared in an article on “A New Paradigm for Climate Change” in the September 2012 issue of Nature Climate Change: “Put bluntly, climate change commitments,” aimed at avoiding the 2°C threshold now seen as representing extremely dangerous climate change, “are incompatible with short-to-medium-term economic growth (in other words, for 10 to 20 years)…. The elephant in the room [the primacy accorded to economic growth] sits undisturbed while collective acquiescence and cognitive dissonance trample all who dare to ask difficult questions.” The failure of most scientists to acknowledge publicly what they know—the impossibility of avoiding the 2°C in a context of continued economic growth and that present climate commitments threaten extremely dangerous climate change—they write,

stems from how deeply the tendrils of economics have permeated into climate science…all to appease the god of economics (or, more precisely, finance)…. At the same time as climate change analyses are being subverted to reconcile them with the orthodoxy of economic growth, neoclassical economics has evidently failed to keep even its own house in order [i.e., it is confronted with a serious and continuing economic crisis that belies its “central tenet” of a self-regulating market]. This failure is not peripheral. It is prolonged, deep-rooted and disregards national boundaries, raising profound issues about the structures, values and framing of contemporary society. This catastrophic and ongoing failure of market economics and the laissez-faire rhetoric accompanying it (unfettered choice, deregulation and so on) could provide an opportunity to think differently about climate change…. This is an opportunity that should and must be grasped. Liberate the science from the economics, finance and astrology, stand by the conclusions however uncomfortable…. Leave the market economists to fight among themselves over the right price for carbon…. The world is moving on and we need to have the audacity to think differently and conceive of alternative futures.

The only way to avoid extremely dangerous climate change, these and other leading scientists insist, is to limit the cumulative carbon emissions since the Industrial Revolution to less than a trillion metric tons. But there is absolutely no possibility of achieving this under capitalist business as usual. Hence a vast “paradigm change” is necessary: this, then, “is to market economics,” Anderson and Bows write, “what Copernican heliocentrism was to Ptolemaic astronomy.”

Obviously such a shift—which would need to go beyond mere “paradigm change” to a transformation of socioeconomic systems—could not be achieved simply through the initiatives of scientists but would require a global mass movement, the greatest in history. The most important nascent development along these lines in the United States today is the “Do the Math” movement (an offshoot of 350.org) led by Bill McKibben, and supported by such figures as Naomi Klein and Greenpeace International Executive Director Kumi Naidoo. McKibben’s “Do the Math” tour has as its goal limiting carbon emissions to a single doubling of the cumulative emissions (565 billion metric tons) released so far into the atmosphere. (It should be noted, however, that such a doubling of carbon emissions, is itself excessive, likely to take us all the way to the 2°C, or trillionth metric ton, threshold and beyond, thus leading over the precipice to extremely dangerous climate change. Hence, the real carbon budget is more stringent—see John Bellamy Foster and Brett Clark, “The Planetary Emergency,” Monthly Review, December 2012, and trillionthtonne.org.) McKibben and Do the Math argue that only 20 percent of known fossil-fuel resources (around 2.8 trillion metric tons) can be burned and the rest must remain in the ground. The Do the Math strategy is thus to push for disinvestment in fossil-fuel corporations—adapting a protest model taken from the disinvestment movement against apartheid in South Africa. “There’s still the possibility,” McKibben declares, “of keeping the rise of the planet’s temperature below two degrees [C]…. But that would take an all-out, focused, wartime-footing kind of effort, and most of all it would take ending the political power of the fossil fuel industry that’s forever delayed change” (“Bill McKibben Talks About the Fight Against Climate Change,” Indy Week, November 14, 2012).

More than that, realistically it would require an-all out battle against the regime of capital. This is a struggle that can only be won by a groundswell movement for a sustainable future that merges with the global struggle for substantive equality—the historic goal of socialism.