Dear Reader, we make this and other articles available for free online to serve those unable to afford or access the print edition of Monthly Review. If you read the magazine online and can afford a print subscription, we hope you will consider purchasing one. Please visit the MR store for subscription options. Thank you very much. —Eds.
Notes from the Editors
by The Editors
(Feb 01, 2013)
Topics: Economic Crisis Economic Theory Political Economy Stagnation Places: United States 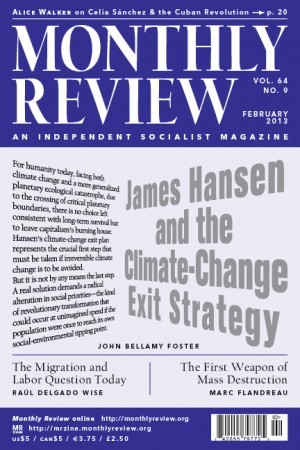 For a long time now orthodox economics has been hindered by its extreme irrealism—a refusal even to attempt a realistic theoretical understanding of how modern capitalism functions. The shift to using fanciful assumptions to explore largely minor issues, following a brief Keynesian moment in the post-Second World War era, has been in many ways self-reinforcing. Once fundamental characteristics of the capitalist economy such as labor exploitation, accumulation, built-in inequality, monopoly power, rent-seeking behavior, technological change, and the tendency to stagnation were removed from the analysis—as a result of an ideological process of system-rationalization—there was little recourse but to fall back in successive stages on more and more abstract models based on increasingly purified notions of individual rationality. This is particularly evident in rational expectations theory, which assumes that all economic actors have not only perfect information but also perfect economic analysis. Thus, while the technical skills of economists improved, their underlying historical understanding was more and more clouded.

Nevertheless, the deepening crisis of today’s monopoly-finance capital has given rise to a new era of questioning within the economics profession, and some top-tier neoclassical economists are now struggling—though hindered at every step by their own training and inclinations—to recapture knowledge long abandoned (at least outside of the left and some of the more realistic sectors of business and finance). Hence, it is not unusual today to find mainstream economists raising issues of stagnation and endemic financial-crisis tendencies that they had long ago dismissed as left-wing fantasies.

The most recent dramatic development along these lines is the rediscovery of: (1) the conflict between labor and capital (underlying and shaping the accumulation process and giving it its class bias), and (2) the growth of monopoly power. Thus in attempting to understand why the U.S. economy “is still by most measures, deeply depressed” while “corporate profits are at a record high,” Paul Krugman has recently argued, most notably in a December 9, 2012 New York Times column entitled “Robots and Robber Barons,” that this might have to do with these two factors.

Over and over again Krugman has indicated surprise at where his analysis is leading him. “Are we really,” he writes, “back to talking about capital versus labor? Isn’t that an old-fashioned, almost Marxist sort of discussion, out of date in our modern information economy? Well, that’s what many people thought; for the past generation discussions of inequality [within orthodox economics] have focused overwhelmingly not on capital versus labor but on distributional issues between workers…. But that may be yesterday’s story.” In a related blog entry on December 11, entitled “Human Versus Physical Capital,” he wrote: “If you want to understand what’s happening to income distribution in the 21st century economy, you need to stop talking so much about skills, and start talking much more about profits and who owns the capital. Mea culpa: I myself didn’t grasp this until recently. But it’s really crucial.”

Krugman is concerned in particular with the issue of the dramatic drop in the labor share of GDP. He attributes this in part to a labor-saving bias in technology, which he refers to somewhat metaphorically as the rise of “robots.” Reaching back into the past he observes in “Robots or Robber Barons” that “serious economists have been aware of this possibility for almost two centuries. The early-19th-century economist David Ricardo,” he tells us, pointed to just such a tendency in his 1817 Principles of Political Economy and Taxation, which “included a chapter on how the new, capital-intensive technologies of the Industrial Revolution could actually make workers worse off, at least for a while.” Krugman, however, stops short of referring to that other “serious economist” who famously expanded upon Ricardo’s thesis: Karl Marx. Still, Krugman recognizes the significance of his own recent awakening in this respect: “I think it’s fair to say that the shift of income from labor to capital has not yet made it into our national discourse. Yet that shift is happening—and it has major implications” (“Robots and Robber Barons”). Moreover, he is alert to the dangers this spells for the system. “If income inequality continues to soar,” he writes, we are looking at a “class-warfare future” (Krugman, “Is Growth Over?” New York Times, December 27, 2012).

The other factor to which Krugman has turned in his attempt to explain today’s economic stagnation is the growth of monopoly power. Thus, referring to an account of the growing monopolization tendency by Barry Lynn and Phillip Longman of the New American Foundation (Lynn is best known for his book, Cornered: The New Monopoly Capitalism and the Economics of Destruction), Krugman writes in “Robots and Robber Barons”: “Increasing business concentration could be an important factor in stagnating demand for labor, as corporations use their growing monopoly power to raise prices without passing the gains on to employees.” In his December 9, 2012 blog post “Technology or Monopoly Power?” he explains that such monopoly power “could simultaneously raise the average rents to capital and reduce the return on investment as perceived by corporations, which would now take into account the negative effects of capital growth on their markups. So a rising-monopoly-power story would be one way to resolve the seeming paradox” of stagnation coupled with “rapidly rising profits and low interest rates.” This could have come straight out of Michał Kalecki’s Selected Essays in the Dynamics of the Capitalist Economy (parts of which at least, judging from his latest book, End This Depression Now!, Krugman has been reading)—or even from the 2012 Monthly Review Press book by John Bellamy Foster and Robert W. McChesney, The Endless Crisis: How Monopoly-Finance Capital Produces Stagnation and Upheaval from the USA to China, which includes statistical evidence on the monopolization tendency.

Krugman is not alone among leading mainstream economists in turning suddenly to growing inequality and monopoly power in order to explain today’s economic stagnation. Joseph Stiglitz’s 2012 book, The Price of Inequality, presents similar arguments. As he makes clear, the problem is that in the crisis “the share of wages” in the economy “has actually fallen,” while “many firms are making good profits” (29). Stiglitz devotes a whole chapter of his book to the “increased monopoly power in the United States.” He argues that this creates a “negative-sum game” whereby the giant, concentrated firms gain, while the economy as a whole loses (33, 45). Likewise Izabella Kaminska, an exceptionally astute reporter for the Financial Times blog, FT Alphaville, observed on December 27 in “In an Economy Not So Far, Far Away,” that “As Paul Krugman, the economist, argued, too much market power can easily end up raising average rents to capital while reducing the return on investment perceived by corporations. This notion resonates well with today’s crisis because it is consistent with the paradox of rapidly rising profits amid low real interest rates, stagnant real wages and persistent unemployment. It also explains rising inequality.”

Of course mainstream economists are a long way from seeing these problems in their full historical dimensions, or from recognizing that both the capital-labor problem and monopoly power are endemic to capitalist development. For Stiglitz, as he explains at the end of his book, the issue is simply one of the revival of antitrust, government regulation of the economy, and progressive income redistribution. There seems to be no real inkling that the conflict between labor and capital extends to the class bias of the capitalist state. Barring the sharpest kind of class struggle, what Stiglitz suggests in the way of reform is unimaginable. And even with it, we cannot be certain much would change within the system. We no longer live in that special period of the post-Second World War U.S. welfare state and European social democracy, in which the existence of the Soviet Union and attempted alternatives in the third world, coupled with an exceptional prosperity, pushed the West toward meaningful reform. Instead we live in an era of neoliberal globalization and financialization, which have pushed the world in a regressive direction. Such structural problems as growing class inequality and rising monopoly power are, moreover, inherent tendencies of capitalism as a system. They will end only with the end of capitalism itself.