Dear Reader, we make this and other articles available for free online to serve those unable to afford or access the print edition of Monthly Review. If you read the magazine online and can afford a print subscription, we hope you will consider purchasing one. Please visit the MR store for subscription options. Thank you very much. —Eds.
Notes from the Editors
by The Editors
(Sep 01, 2013)
Topics: Economic Theory Political Economy Stagnation Places: Americas United States 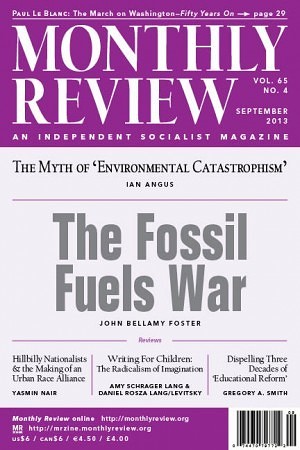 When confronted in the 1980s with the failure of the younger generation of economists (both mainstream and radical) to take seriously the issue of the return of economic stagnation, Harry Magdoff and Paul Sweezy stated in their book Stagnation and the Financial Explosion (Monthly Review Press, 1987, 12): “There is a temptation to say: just wait and see, you’ll find out soon enough…. But it would be a cop-out to leave it at that. We owe it to our readers at least to try to make clearer what we mean by stagnation and why we think it is so important.” They proceeded to do exactly that, producing a work that in terms of the trends of the last quarter-century has to be regarded as prescient.

Today, decades later, we can see the depth of the stagnation tendency of monopoly capitalism finally dawning upon some of the most realistic and competent of mainstream economists. For example, on July 5, 2013, Paul Krugman wrote a short piece entitled “On the Political Economy of Permanent Stagnation” (http://krugman.blogs.nytimes.com), contending that the United States, Europe, and Japan could well be facing slow growth and high unemployment/underemployment “for a very long time.” Employing arguments with which MR readers will be familiar he added: “True, something could come along—a new technology that induces lots of investment, a war, or maybe just a sufficient accumulation of ‘use, decay, and obsolescence,’ as Keynes put it. But at this point I have real doubts about whether there will be events that force policy action.”

An even more startling assessment was provided recently by J. Bradford DeLong, professor of economics at the University of California, Berkeley, in an article entitled “The Second Great Depression.” DeLong was writing in the July-August 2013 issue of Foreign Affairs, the journal of the Council on Foreign Relations. He explained: “It looks as if the U.S. economy, when all is said and done, will have faced certainly one lost decade, and perhaps even two…. The U.S. economy is not recovering but flatlining” (159). In DeLong’s view a new Keynes is needed, “but no living economist is smart, bold, or arrogant enough to try to be Keynes.” Worse still, the policy apparatus is under the control of “financiers” who are engaged in “self-regulation” and who “simply expect to make their pile and then say, ‘Après moi, le déluge’” (162–63).

These arguments overlap with the analysis presented in John Bellamy Foster and Robert W. McChesney, The Endless Crisis: How Monopoly-Finance Capital Produces Stagnation and Upheaval from the USA to China (Monthly Review Press, 2012). However, while Krugman and DeLong still place their diminishing hopes on a policy shift in the United States and other advanced economies, Foster and McChesney argue that the system has entered a new phase of monopoly-finance capital in which stagnation and financialization are locked in a kind of symbiotic embrace. This is further complicated by the growth of a financial power elite—the main beneficiary of neoliberalism, representing the antithesis of the Keynesian “euthanasia of the rentier.” What is required in this situation is clearly something far more radical than contemplated by Keynes: a sharp break with the current system of power and a long revolution. (The planetary environmental crisis and the limits of capital accumulation in that respect make this even more necessary.)

But what about China? Isn’t it the locomotive to save capitalism in the crisis? Increasingly, the more realistic economists even in the mainstream are saying, No. In the view of Michael Pettis, professor of finance at Peking University, in “The Urbanization Fallacy,” China Financial Markets blog, July 10, 2013 (synopsis at http://globaleconomicanalysis.blogspot.com/2013/07/china-urbanization-growth-fallacy.html), China is in a severe period of economic dislocation, which explains its growth slowdown, and increasing financial instability. “China,” Pettis writes, “cannot rebalance the economy and it cannot reduce its growing credit risk until it thoroughly overhauls the growth model and the capital allocation process, and it simply cannot do either at economic growth rates at much above 3–4%,” which would mean a drop in growth rates by 50 percent or more. For Pettis, China is suffering from many years of “overinvestment.” As stated in The Endless Crisis: “Overinvestment [in China] has been accompanied by increasing financial fragility raising the question of a ‘China Bubble’” (162). These and other contradictions of the Chinese accumulation process are now coming to the fore.

Indeed, in societies throughout the world—Brazil, Turkey, China, Greece, Spain—the recent structural crisis of capital is generating a new spirit of mass protest. Even the United States is unlikely to prove immune. This would not have surprised Magdoff and Sweezy in the 1980s. “Stagnation theory,” they wrote in Stagnation and the Financial Explosion, “tells us” that the system of monopoly capital “is always tending to bog down under the weight of its own contradictions, and the conditions that foster a new lease on life, like major wars and speculative manias, do enormous damage and soon lose their efficacy. Stagnation theory, in short, teaches us that what we need is not the reform of monopoly capitalism but its replacement by a system that organizes economic activity not for the greater glory of capital but to meet the needs of people to lead decent, secure, and to the extent possible, creative lives” (24–25).