Dear Reader, we make this and other articles available for free online to serve those unable to afford or access the print edition of Monthly Review. If you read the magazine online and can afford a print subscription, we hope you will consider purchasing one. Please visit the MR store for subscription options. Thank you very much. —Eds.
Notes from the Editors
by The Editors
(Dec 01, 2013)
Places: Americas Syria United States 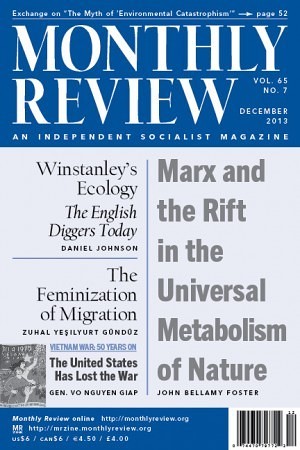 The AFL-CIO held its annual convention this past September in Los Angeles. Many commentators hailed this meeting as historic, one in which the nation’s major labor federation finally came to grips with the near disappearance and growing political irrelevance of unions. Union density is abysmally low and declining, with an astonishing 6.6 percent of private sector employees now organized, lower than at any time in the past century. And, with rare exceptions, labor’s ability to influence legislation and workplace regulation is nonexistent. It could not even prevent passage last year of a right-to-work law in Michigan, the cradle of industrial unionism. All of this has translated into falling wages and benefits for union and nonunion workers alike, since the union threat effect on nonunion employers has diminished dramatically.

To reverse course, AFL-CIO leaders laid out a plan to broaden the federation’s membership base to include nonunion workers and members of fraternal groups, such as immigrant advocates and environmental organizations. Representatives of these groups were invited to the convention and some given the opportunity to speak, resulting in the most diverse convention in history. The promise to involve these potential constituencies in organizing activities and grant nonunion workers and sympathizers associate membership gave supporters of the labor movement reason to cheer. If successful, labor’s political power could expand, and coalitions with its new partners could provide leverage for the unionization of fast-food and other low-wage laborers. For example, workers’ centers could partner with unions to achieve both collective bargaining agreements and living wage laws for such employees.

While we should applaud these efforts, they leave important questions unanswered. First, will the AFL-CIO use its considerable resources to fund workers’ centers, workplace organizations of nonunion workers, environmental struggles, and resistance by immigrants to deportations and deplorable working and living conditions? Its unwillingness to provide anything but token financial support for union-affiliated Jobs with Justice is not encouraging.

Second, will organized labor detach itself from the Democratic Party, which has attacked workers nearly as viciously as the Republicans? President Obama’s health-care plan will damage union workers, many of whom will lose their union-negotiated coverage. Yet, with few exceptions, AFL-CIO leaders have remained silent, even when Obama, after the convention, rejected an AFL-CIO plea that the government not penalize certain union-negotiated multi-employer health-care plans.

Third, will the AFL-CIO finally condemn U.S. imperialism and the endless wars that characterize this era? Federation president Richard Trumka said that there would be no resolution on the then-impending air attacks on Syria. Given the long and repellent history of labor’s open or tacit support for U.S. wars and covert operations that have murdered millions of workers and peasants, this is the least that could have been done. What is the point of talking about the plight of foreign workers (in Bangladesh, for example) if nothing is said about the root cause of this misery—the military and economic imperialism of the United States? What actual international solidarity will result from this?

Fourth, will the federation concern itself with the plight of workers who are in unions? Will unions stop making concessions and organize strikes, boycotts, and picketing? Will they do the long-term, costly, and patient organizing necessary to win new members? Will unions resurrect long-dead education programs for members (and nonmembers too)? How will new union members be recruited when unions have made concessions a way of life? How will fast-food workers win their goal of earning $15 an hour when new hires in UAW auto plants now make less than this? No answers were forthcoming at the convention.

Perhaps one reason for the silence on union workers is that the AFL-CIO has little control over its member unions, yet the federation is dominated by the largest and richest affiliates. Most of these are not committed to rebuilding the labor movement, much less acting on behalf of the entire working class. They are locked into the bankrupt strategy of labor-management cooperation, and they would rather gain new members by merger or legislative decree than by organizing them. They do almost no member education. Their focus is narrowly economistic; the Laborers Union, for example, is opposed to building alliances with environmental groups because the latter are opposed to the Keystone XL pipeline.

Even in the American Federation of Teachers (AFT), whose Chicago Teachers Union local has broken with the cooperation model and begun to show how unions can further the aim of meeting class-wide needs, the national leadership remains timid and defensive. This past April, AFT president Randi Weingarten embraced the Common Core State Standards for mathematics and language arts, which were developed by school administrators, college professors, and representatives of private education companies, with no input from either public school teachers or parents. These standards, in effect imposed by the federal government with the threat of denial of funds under Obama’s Race to the Top, sanctify dubious “skills,” and where implemented, have caused standardized test scores to plummet. This has delighted those who have been attacking the public schools, who now hope that the poor test results will drive communities to abandon them in favor of charter and private schools. All Weingarten did in the face of this was urge a moratorium on using test results to punish schools and teachers until the standards can be made to work effectively. She thus accepted the premises she should instead have rejected out of hand.

These neglected questions make two things clear. First, for the U.S. labor movement to be rebuilt, the unions must be radically and democratically transformed in order to protect their members, recruit new ones, and begin to speak for the entire working class. Second, this radical transformation will need a left wing, inside and outside of the unions—to help the working class lose its fear, raise its expectations, and begin building the cooperative and egalitarian society that alone can reverse the multiple catastrophes toward which capitalism is leading us.

We would like to congratulate our good friend, Doug Dowd, who is turning 94 this month, for his completion of a 100-page monograph—part of a continuing series, on his reflections on the state of the world political economy—entitled Its Time For Us To Take Over. This new work is now available on the MR website at https://monthlyreview.org/commentary/its-time-for-us-to-take-over. In it he covers such issues as the present world-economic crisis from a century-long perspective, the rise of the current “dollarocracy” in the United States (building on the work of John Nichols and Robert W. McChesney), and the emerging planetary ecological crisis.

Correction: On page 2, paragraph 1 of the September issue of MR it said: “Tar-sands-oil production and processing generates roughly 14 percent more emissions than the average oil consumed in the United States….” This was taken accurately from the Scientific American article cited in the piece, but it turns out that source was incorrect in that it should have said “production, processing, and use.” Hence, the passage in the magazine should be amended to read: “The net effect of tar-sands-oil production, processing, and use in the economy is to add 14 percent more carbon emissions compared to conventional crude-oil sources….”