Dear Reader, we make this and other articles available for free online to serve those unable to afford or access the print edition of Monthly Review. If you read the magazine online and can afford a print subscription, we hope you will consider purchasing one. Please visit the MR store for subscription options. Thank you very much. —Eds.
Notes from the Editors
by The Editors
(Jan 01, 2014)
Topics: Political Economy Stagnation Places: Americas United States 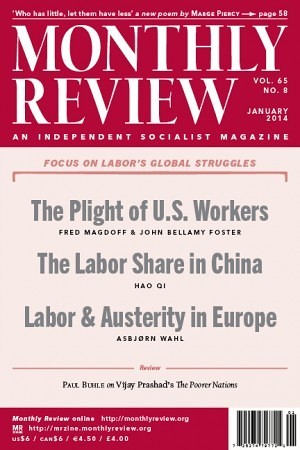 On November 16, 2013, Paul Krugman published a piece on his New York Times blog entitled “Secular Stagnation, Coalmines, Bubbles, and Larry Summers,” consisting of an extended commentary on former Clinton Treasury Secretary and Obama economic advisor Lawrence Summers’s November 8 presentation to the IMF’s Economic Forum. Summers’s main contention in his speech was that four years after the start of the economic recovery the jobless situation in the United States was so bad that “the share of adults who are working has not increased at all” (for evidence of this see the jobless rate charts in the Review of the Month in this issue of MR). This raised fundamental issues for economics. One of these was that it was evident based on the experience of the previous two decades that financial bubbles were now needed simply to reach anything like a full-employment economy. Further, it was necessary under these circumstances, he argued, to reach back into economic history to a “set of older ideas” that had long been “rejected,” namely views “that went under the phrase secular stagnation.”

Krugman, in following up on Summers’s IMF speech, highlighted Alvin Hansen’s theory of secular stagnation in the 1930s to ‘50s. Long-term economic stagnation, Krugman acknowledged, was now “the norm” for the economy, not the exception. Under these circumstances, he suggested, even economic waste or “unproductive spending” was useful if it could get the economy going again—not excluding the stimulative effects of financial bubbles. Writing in a fashion that could have come straight out of Monthly Review at any point in the last forty years, he declared: “We now know that the economic expansion of 2003–2007 was driven by a bubble. You can say the same about the later part of the 90s expansion; and you can in fact say the same about the later years of the Reagan expansion, which was driven at that point by runaway thrift institutions and a large bubble in commercial real estate.” But in trying to understand how stagnation itself came about and created this whole irrational set of economic conditions, Krugman looked at only one part of Hansen’s argument, focusing simply on demographic factors. He thus failed to draw attention to the much more important problem of investment under conditions of overcapacity and mature industry, as well as the whole question of monopolistic/oligopolistic capitalism—all of which were taken seriously at some level by Hansen, and were developed in a far more radical way by socialist thinkers such as Michał Kalecki, Joseph Steindl, Paul Baran, and Paul Sweezy. On the significance of these analyses for the understanding of the present economic stagnation, see John Bellamy Foster and Robert W. McChesney, The Endless Crisis (New York: Monthly Review Press, 2012).

The three lead articles in this issue of MR all address in various ways the declining position of labor in the world of today. The first two are concerned especially with the declining labor share of income that has arisen, under very different conditions, in both the United States and China. This suggests that the dramatic fall in the labor share is a phenomenon associated with the system of global monopoly-finance capital as a whole, and not confined to any one nation or part of the world.

Recent economic studies strongly confirm this. The Organisation of Economic Cooperation Development (OECD) pointed out in its Economic Outlook, 2012 that the drop in the labor share has affected “nearly all” of the developed economies, while the International Labor Organization (ILO) added in its Global Wage Report, 2012/2013 that this is “even more pronounced in many emerging and developing countries.” An October 2013 study published by the National Bureau of Economic Research (NBER), entitled “The Global Decline of the Labor Share,” indicates that out of a sample of fifty-nine countries, forty-two had experienced “downward trends” in recent decades in their corporate-sector labor shares, including not only the wealthy economies, but also emerging countries such as China, India, and Mexico. A global race to the bottom in labor shares is therefore a structural reality of today’s capitalism—one that is occurring throughout the world system and is inseparable from deepening economic stagnation.

The reports of the OECD and the ILO—along with a September 2013 working paper issued by the Federal Reserve Bank of San Francisco on “The Decline of the U.S. Labor Share”—stress that the decline in the labor share is occurring despite the fact that such data include as total compensation to labor the gargantuan salaries, bonuses, and stock options of the top 1 percent which have been growing hand over fist. In the words of the ILO, “Labour shares, as measured in the UN System of National Accounts…underestimate the fall in the proportion of labour compensation going to workers paid below the median wage. If the labour compensation of the top 1 percent of income earners was excluded from the computation, the drop of the labour share would appear even greater. This reflects the sharp increase, especially in English-speaking countries, of the wages and salaries (including bonuses and exercised stock options) of top executives, who now cohabit with capital owners at the top of the income hierarchy.” The Federal Reserve Bank of San Francisco discovered (as reported in the Review of the Month for this issue), that simply excluding the top 1 percent from U.S. labor income results in a 10-percentage-point drop in the labor share of the bottom 99 percent by 2010 compared to the pre–1980s period.

The ILO goes on to stress in its Global Wage Report that the worldwide decrease of the labor share of income over the last few decades finds its “mirror image” in “the increase in the capital share of income.” Although the ILO itself does not explicitly draw this conclusion, it is obvious that it is this increase in the global capital share which lies behind the overaccumulation of capital that constitutes the chief contradiction of capitalism in our time. (OECD, Economic Outlook, 2012, 109; ILO, Global Wage Report, 2012/2013, 43–44; Michael W.L. Elsby, Bart Hobijn, and Aysegul Sahin, “The Decline of the U.S. Labor Share,” Federal Reserve Bank of San Francisco, Working Paper 2013–27 [September 2013], 31; Loukas Karabarbounis and Brent Neiman, “The Global Decline of the Labor Share,” National Bureau of Economic Research, Working Paper no. 19136
[June 2013], 1.)

For a number of years the theory of imperialism has been in disarray as the big shifts in political economy in the age of globalized monopoly-finance capital have demanded new systematic attempts to confront the changing reality at the global level, while building on the powerful political-economic critiques of the past. Fortunately, several important works have recently come out that reflect radical innovations in imperialism theory that are now taking place. Monthly Review Press has just published this fall two new books by Samir Amin: The Implosion of Contemporary Capitalism and Three Essays on Marxian Value Theory—both building on his 2010 Monthly Review Press book The Law of Worldwide Value—which together reconfigure our understanding of the political economy of imperialism. The September–October 2013 issue of New Left Review consists of a magisterial two-part work by Perry Anderson on “American Foreign Policy and Its Thinkers,” containing a brilliant, caustic narrative of U.S. imperialism from the Second World War to the present.

A standout contribution to the developing imperialism debate is The Making of Global Capitalism (Verso, 2012) by Leo Panitch and Sam Gindin, which has just been awarded the 2013 Deutscher Memorial Prize. Their book provides an important, and likely to be extremely influential, account of the role of the United States in the formation of international economic institutions since the Second World War. Congratulations Leo and Sam!

The Plight of the U.S. Working Class
Three Cheers (Almost) for Gus Speth