Dear Reader, we make this and other articles available for free online to serve those unable to afford or access the print edition of Monthly Review. If you read the magazine online and can afford a print subscription, we hope you will consider purchasing one. Please visit the MR store for subscription options. Thank you very much. —Eds.
Notes from the Editors
by The Editors
(Oct 01, 2014)
Topics: Economic Theory Marxism Political Economy Places: Americas United States 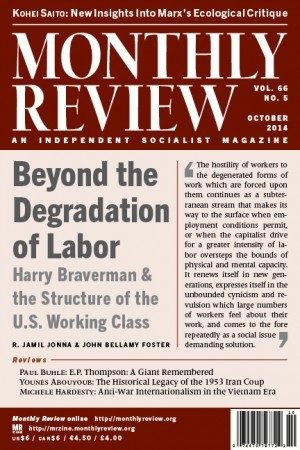 Secular stagnation (or the trend towards long-term slow growth and continuing high unemployment/underemployment) has become a big issue in the mature economies since 2013, when former U.S. Treasury Secretary Larry Summers raised the question at an IMF economic forum. Compilations of work on the subject can now be found on the Internet, such as the one by economists Coen Teulings and Richard Baldwin; which however leaves out all contributions by heterodox economists (“Secular Stagnation: Facts, Causes and Cures,” August 15, 2014, http://voxeu.org). Teulings and Baldwin credit Summers with having “resurrected” the secular stagnation issue. But is this true? Only in the sense that he reintroduced it to mainstream neoclassical economics. It has long been a topic on the left, and particularly in Monthly Review, where editor Paul Sweezy explicitly drew attention to the “secular stagnation” question more than forty years ago (“Notes on the U.S. Situation at the End of 1972,” MR, January 1973)—with MR tracking the stagnation trend month by month in the four decades that followed. (Even before this, Harry Magdoff, who joined Sweezy as coeditor of MR in 1969, initiated what was to be a continuing empirical analysis of the relation between stagnation and financialization, with his article “The Problems of U.S. Capitalism” for the Socialist Register, 1965.)

Especially noteworthy in this respect was Sweezy’s path-breaking lecture “Why Stagnation?” delivered to the Harvard Economics Club in March 1982 (appearing in MR in June 1982). This raises the intriguing question: Was Summers present at Sweezy’s “Why Stagnation?” talk? We contacted Summers’s office on August 24, and were told that he said he didn’t recall, “but could be!”; his office then contacted us later the same day and said that he had reconsidered this and while he still did not remember, he thought it “unlikely.” Whether or not Summers was actually present on this occasion—and he believes it likely he was not—the question remains as to whether he was aware at the time of Sweezy’s talk, and of his general argument on stagnation. It is hard to imagine how all of this could have passed Summers by completely. And if not Summers himself, what about other economists in Cambridge at the time? Sweezy’s “Why Stagnation?” talk at the Harvard Economics Club in 1982 attracted considerable attention and a good audience. Now that mainstream economics is beginning to face up to the reality of secular stagnation, the questions raised by Sweezy’s talk extend to the history of ideas—how they survive in times when they are anathema and reappear when their truth is reasserted by facts.

Isn’t it about time, then, that orthodox economists, Summers included, began to acknowledge the enormous work done on this topic on the left over decades, and indeed the greater complexity and historicity of the analysis to be found there—not only in MR but within heterodox economics more generally? Such an admission might even do orthodox economists some good.

We are pleased to announce that our friend Marta Harnecker’s book, A World to Build: New Paths toward Twenty-First Century Socialism, to be published by Monthly Review Press in November, won Venezuela’s prestigious 2013 Libertador (Liberator) Award for Critical Thought, established in 2005 by President Hugo Chávez. The award was given to Harnecker in August by President Nicolás Maduro. Maduro also presented five honorable mentions for outstanding works considered for the award; the first of these was for MR author Samir Amin’s new book, The Implosion of Contemporary Capitalism (Monthly Review Press, 2013). Our congratulations to Marta and Samir!

The 2008 Libertador Award, it should be noted, was given to István Mészáros for his book The Challenge and Burden of Historical Time (Monthly Review Press, 2008). In order to obtain further information on these books by Harnecker, Amin, and Mészáros, or to purchase them, visit Monthly Review Press at https://monthlyreview.org/press.

The international project to publish Marx and Engels’s complete works, known as the Marx-Engels Gesamtausgabe (MEGA), which is projected to take another twenty or thirty years to complete, has been organized since 1990 by the Internationale Marx-Engels Stiftung (IMES) in Amsterdam and is being carried forward by research teams in a half-dozen countries. New volumes continue to be published. One of the recent successes, led by the SENDA Group in Japan, is the digitalization of the second section (including the manuscripts of Capital). A great deal of interest has been generated by the fourth section of the MEGA, which deals with some 250 notebooks by Marx and Engels, less than half of which (twelve out of the thirty-two volumes) are published so far. Around one third of Marx’s own notebooks were made during the last ten years of his life, and deal with topics that were not all integrated into the second and third volumes of Capital. Half of these deal with the natural sciences, including geology, chemistry, and mathematics, and much of this relates to ecological topics. One of the important MEGA volumes currently being edited is IV/18. It includes Marx’s notebooks between February 1864 and June 1870, devoted to natural science matters, which were closely related to Marx’s work in Capital, particularly the chapters on rent in volume 3. The volume includes Marx’s notebooks on Liebig, Johnston, Fraas, Lavergne, Mauer, and others. The notebooks deal with a variety of key issues, including degradation of the soil; the loss of soil nutrients in rural areas and their transfer to the cities; desertification; the contradictory development of British high farming; the modification of livestock so as to increase growth rates and meat production (of which Marx was extremely critical); and questions of regional climate change.

The publication in this issue of Monthly Review of Kohei Saito’s article “The Emergence of Marx’s Critique of Modern Agriculture: Ecological Insights from His Excerpt Notebooks” represents a landmark development in this respect. Saito is currently a PhD candidate at Humboldt University in Berlin working on a dissertation on Marx’s ecological critique of capitalism, and a member of the Japanese MEGA editorial group, involved in the preparation of volume IV/18. His article examines the evolution of Marx’s studies of soil chemistry, focusing on Justus von Liebig in particular. The relation between Marx and Liebig, and the development on this basis of Marx’s notion of the metabolic rift, was examined by John Bellamy Foster in Marx’s Ecology (Monthly Review Press, 2000). Foster’s analysis, however, was developed without direct knowledge of the contents of Marx’s unpublished notes on Liebig. Saito’s article gives us a detailed treatment of how Marx’s response to Liebig’s ecological argument (and that of other related analysts of the metabolic rift) changed over time—as Marx’s thought in this area developed between the early 1850s and the mid–1860s. We hope his contribution here will prove valuable to the growing ecosocialist movement within Marxism, and will demonstrate the importance of supporting the MEGA project.

This year marks the fortieth anniversary of the publication of Harry Braverman’s magnum opus, Labor and Monopoly Capital (Monthly Review Press, 1974). We are marking this anniversary by publishing as the Review of the Month in this issue an article by R. Jamil Jonna and John Bellamy Foster, entitled “Braverman and the Structure of the U.S. Working Class: Beyond the Degradation of Labor,” originally published this fall in the Employee Responsibilities and Rights Journal, and reprinted here by permission. Due to copyright restrictions we regret that this article will not be publicly available for free on the MR website. However, all subscribers will have online access to the article in pdf form as part of the MR archives.

Joe Berry, the editor of the Interactive Issues Section of the Labor Studies Journal (LSJ), has informed us that LSJ is soliciting the submission of articles for a possible section on the historical impact of Braverman’s Labor and Monopoly Capital in honor of its 40th anniversary. Abstracts are being requested by October 1, 2014, and final papers by November 1, 2014. Because of the unusual character of this topic for LSJ, submissions of any length will be considered and may be in other than regular essay form. Please send any abstracts or inquiries to Joe Berry, Interactive Issues Editor, Labor Studies Journal, joeberry [at] igc.org.

An article in the July 24, 2014 issue of Publisher’s Weekly carried the title “South End Throws in the Towel.” The reason for the thirty-seven-year-old South End Press’s demise was financial. It had not managed to publish a new book for over two years, due to dwindling monetary resources and mounting debt. South End entered the Great Recession already in a tenuous financial condition (of the kind that periodically threatens all small, nonprofit left publishers). Its attempt to deal with its worsening budgetary situation led to a cost-saving relocation in 2010 from its longtime Cambridge, Massachusetts home to Brooklyn, made possible by Medgar Evers College of the City University of New York. This was followed by a major financial drive two years later. However, all of this was not enough to turn things around in the difficult economic climate, making South End a casualty of the U.S. financial crisis and the deep stagnation that followed.

We would like to provide homage to all of those who made South End Press such an important and vital part of the overall left movement in the country. Indeed, it is hard for us to think of the new social movements from the 1970s on without also thinking of South End Press. It was known for its courageous publication of such authors as Noam Chomsky, Edward Herman, bell hooks, Arundhati Roy, Daniel Singer, and Howard Zinn. The publication of Herman and Chomsky’s The Political Economy of Human Rights in 1979 stands out as a landmark in U.S. publishing, and in the analysis of U.S. imperialism.

South End’s demise leaves a vibrant community of left publishers behind in the United States. Besides Monthly Review Press, there is Haymarket Books (which is taking up many South End Press titles), New Press, Nation Books, Verso (now based in New York as well as London), Seven Stories, AK Press, PM Press, and others. Nevertheless, the disappearance of South End Press is a genuine loss: the demise of something distinctive, which we must strive to remember in our struggles.