Dear Reader, we make this and other articles available for free online to serve those unable to afford or access the print edition of Monthly Review. If you read the magazine online and can afford a print subscription, we hope you will consider purchasing one. Please visit the MR store for subscription options. Thank you very much. —Eds.
Notes from the Editors
by The Editors
(Dec 01, 2014)
Topics: Health Inequality Political Economy Places: Africa Americas Cuba 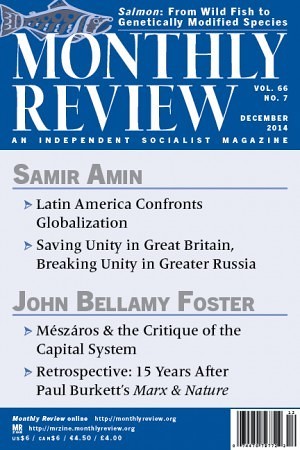 In 1832, when the global cholera pandemic was approaching Manchester—as a young Frederick Engels was later to recount in The Condition of the Working Class in England (1845)—“a universal terror seized the bourgeoisie of the city. People remembered the unwholesome dwellings of the poor, and trembled before the certainty that each of these slums would become a centre for the plague, whence it would spread desolation in all directions through the houses of the propertied class.” As a result, Engels noted, various official inquiries were commissioned into the condition of the poor. But little was done in the end to combat the social factors that facilitated the spread of the disease. (It was only decades later that it came to be widely recognized that cholera was due to a waterborne pathogen, the bacteria Vibrio cholerae.)

One can see an analogous situation today in the growing concern that has materialized in the United States and other wealthy nations over the Ebola epidemic in Africa. In “Out of Control,” the Washington Post (October 4, 2014) observed “the New Kru Town slum in Monrovia has no public water supply, no toilets, no sanitation system, no electricity. People live in hovels slapped together from wood and metal. Most people have no running water, other than what’s in the streets when downpours soak the neighborhood.” But this sudden recollection of the abysmal conditions of the African poor was not motivated primarily by compassion, but by the fear that such slums are breeding grounds for the Ebola virus, threatening a global pandemic that could reach the rich countries themselves. (The conditions highlighted by the Washington Post in the story mentioned here, it should be cautioned, do not directly account for the spread of Ebola, which is transmitted by human-to-human bodily fluids and by surfaces and materials contaminated by these fluids. But in a wider context it is clear that poverty and social-environmental problems of the kind referred to are important, indirect factors in what is a complex epidemiological situation. As Harvard Professor Paul Farmer recently said of Ebola after a trip to Africa, “This isn’t a natural disaster. It is the terrorism of poverty” [quoted in the Washington Post, October 6, 2014].)

The United States has responded by sending thousands of military troops to the affected region, where they are building housing and other facilities. However, little direct medical assistance has been forthcoming from the United States and its major allies, which include the former colonial powers in Africa.

Under these circumstances, world leadership in aiding the African populations battling Ebola has been assumed by Cuba, which as of this date (late October 2014) has 256 doctors and nurses in the region, exceeding that of any other country. In the words of Fidel Castro, each of these medical professionals are providing “the greatest example of solidarity a human being can offer” (“Duty Calls,” October 17, 2014, https://monthlyreview.org/castro). Cuba’s bold action coupled with international fear of the spread of Ebola led to a momentary break in the media blockade that has generally excluded any mention of the achievements of the Cuban Revolution. On October 10, 2014, the Wall Street Journal carried a story with the headline “Cuba Stands at Forefront of Ebola Battle in Africa.” This was followed by a New York Times editorial on October 19, entitled “Cuba’s Impressive Role on Ebola,” and another article by Reuter’s on October 21, “Cuban Doctors Proud to Risk Lives in Mission to Halt Ebola.” These stories alluded to Cuba’s extraordinary role in sending doctors to countries all over the world whenever natural disasters have struck, including its offer to send doctors to help the United States after Hurricane Katrina (an offer that the U.S. government refused). (For those interested in Cuba’s impressive history in the promotion of revolutionary doctors and in providing medical help to the world, we recommend Steve Brouwer’s Revolutionary Doctors: How Venezuela and Cuba are Changing the World’s Conception of Health Care [Monthly Review Press, 2011].)

In the past we have found the Corner House (UK) website to be a useful source of climate change information. Corner House describes itself as supporting “democratic and community movements for climate and social justice.” We were therefore surprised to see a recent article by one of its directors, Larry Lohmann, criticizing both MR editor John Bellamy Foster and Nation columnist and climate activist Naomi Klein for their ecological critiques of capitalism. Entitled “Fetishisms of Apocalypse,” Lohmann’s piece throws scorn upon the suggestion that with the continuation of business as usual the world is facing the prospect of a series of immense, irreversible environmental catastrophes on a planetary scale—the view advanced by today’s scientific consensus—as, in his terms, promoting “apocalyptic obsessions.” Arguing from an ostensibly left position, Lohmann states:

Although they can hardly be accused of drawing back from analyzing the dynamics of capital, some flavour of this approach lingers on even among some thinkers on the left such as John Bellamy Foster and Naomi Klein, who contemplating apocalypse, are tempted to fall back on creating Cartesian slogans according to which not only does capitalism act on a wholly separate Nature (“Capitalism’s War on the Earth”), but Nature itself somehow acquires that long-coveted ability to overthrow Capitalism (“This Changes Everything: Capitalism vs. the Climate”).

(Lohmann’s references here are to the subtitles of two books: John Bellamy Foster, Brett Clark, and Richard York, The Ecological Rift: Capitalism’s War on the Earth [New York: Monthly Review Press, 2010] and Naomi Klein, This Changes Everything: Capitalism vs. the Climate [New York: Simon and Schuster, 2014].)

Reading this, we rubbed our eyes in disbelief. Lohmann seems to think that capitalism and the larger world of nature of which it is a part are so inextricably linked that to separate them from each other, even for critical analysis—referring as Foster, Clark, and York do to Capitalism’s War on the Earth—represents a capitulation to Cartesian dualism. He does not stop to think that complex, dialectical thinking is aimed at precisely these kinds of oppositions/contradictions. It is an elementary fact of today’s world that capitalism is in an antagonistic, alienated relation to its natural environment on a planetary scale. Any attempt to deny this can only serve to reinforce the position of those who have a vested interest in opposing fundamental social change, even when the future of humanity is at stake.

No less startling was Lohmann’s contention that by depicting capitalism as at odds with the earth (including the climate) Foster and Klein were somehow saying that the “long-coveted ability to overthrow Capitalism” now came from “Nature itself.” Yet no reader of their books could fail to see that the genuine hope that they provide for the future is based not on some abstract notion of nature’s revenge, but on the carrying out of meaningful, radical social change. Klein’s final chapter is entitled “The Leap Years: Just Enough Time for Impossible.” This is a call to action on a global scale of a kind unprecedented in human history, in response to a planetary crisis that is equally unprecedented. Can humanity rise to the challenge? We believe it can. (Those interested in learning more about or purchasing Foster, Clark, and York’s The Ecological Rift can visit book at MR Press.)

In 2010 Monthly Review Press published Edward S. Herman and David Peterson, The Politics of Genocide (with a foreword by Noam Chomsky). Part of their book questioned the official claims with regard to the 1994 genocide in Rwanda. Herman and Peterson did not question that genocide had occurred, but argued that the Tutsi (led by the RPF, the Rwandan Patriotic Front) had inflicted it on the Hutu, rather than the other way around as in the received ideology. The fact that the West did not intervene to stop the killing, they argued, was connected to the fact that the RPF was allied with the United States and the other Western powers. George Monbiot of the Guardian, coming to the aid of the establishment, sought to cut off discussion by accusing Herman, Peterson, and Chomsky of being “genocide deniers.” (See Jonathan Cook, “George Monbiot, McCarthy of the Left?” CounterPunch, October 8, 2014.) Now, twenty years after the Rwanda tragedy, the BBC has come out with a documentary, Rwanda’s Untold Story (http://bbc.co.uk/programmes/b04kk03t), which backs up the interpretation provided in The Politics of Genocide. (For those interested in learning more about or in purchasing Herman and Peterson’s The Politics of Genocide can find the book at MR Press.)

MR subscribers will have received the annual MR associates fall appeal several months ago. In that appeal we described MR’s determination to hold the line politically against all odds. In response, our friend and MR author John W. Farley (“Our Last Chance to Save Humanity?” Monthly Review, September 2010) wrote back to us saying: “I’d like to make an additional point. The left in the United States is in disarray, which is of course deplorable, but it does have its bright side: MR writers can tell the whole truth without worrying about scaring off potential supporters. An MR writer who was the head of an organization of 200,000 members might feel under pressure to pull punches, at least some time. (Don’t laugh at the number: SDS had 100,000 members at its peak.) It is especially important to tell the whole truth in the United States, where ideological hegemony is the first defense of capitalism.”

We couldn’t agree more. MR has always followed the principle “Better Smaller But Better” (MR, July 1950). We have deliberately refrained from seeking to expand our numbers of subscribers and supporters if this meant in any way compromising our socialist message. But this means that we must rely all the more on those who are willing to support this uncompromising position by standing together with us. We therefore urge those of you who have not yet responded to our appeal to do so. It may make all the difference.

Mészáros and the Critique of the Capital System
Voices of Socialism: Karl Marx