Dear Reader, we make this and other articles available for free online to serve those unable to afford or access the print edition of Monthly Review. If you read the magazine online and can afford a print subscription, we hope you will consider purchasing one. Please visit the MR store for subscription options. Thank you very much. —Eds.
Notes from the Editors
by The Editors
(Feb 01, 2015)
Topics: Culture Education Political Economy Places: Americas United States 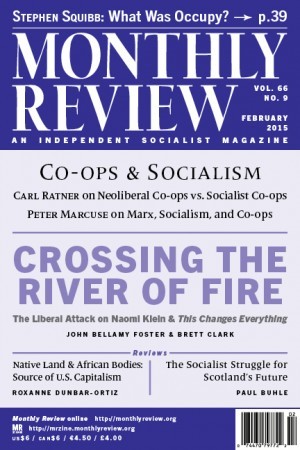 John Cassidy, who writes on economics for the New Yorker, is in our view one of the most interesting and creative commentators on economic analysis and trends writing in the mainstream today. His perspective might be best characterized as institutionalist-realist, in the tradition of thinkers like Thorstein Veblen, John Kenneth Galbraith, and Hyman Minsky. Especially notable from our perspective is Cassidy’s October 20, 1997, New Yorker article “The Return of Karl Marx,” which presented Marx as a theorist of twenty-first century globalization; his November 11, 2002, New Yorker article “The Next Crash: Is the Housing Market a Bubble That’s About to Burst?,” which pointed to the dangers of the housing bubble five years before it burst; and his 2010 book, How Markets Fail: The Logic of Economic Calamities, which ranks as one of the best critiques of neoclassical economics in the wake of the 2007–2009 financial crisis.

One of the frustrating things about covering American politics from a vaguely left-liberal perspective is that many of the left-left theories turn out to be true, or true enough. You try to point out to the street protestors and tenured Marxists that things are more complicated than Noam Chomsky and the late Paul Sweezy would have you believe, and, all too often, it turns out they aren’t much more complicated. The richest 0.1 percent really is getting richer and richer while most Americans see their living standards stagnate. The C.I.A. really did torture people in secret prisons overseas, and the N.S.A. has just received authorization to carry on gathering all of your phone records. The big banks and corporations really do run Washington—or, at least, that’s how it seems on this chilly December day.

Cassidy goes on to explain how the spending bill passed by the House of Representatives included a rider that rolled back regulations that had been imposed after the Great Financial Crisis on some of the riskier activities of banks. Such speculative activities were to be transferred to the unregulated bank subsidiaries not covered by the federally guaranteed bank insurance system. This has now been reversed and banks are again allowed to engage directly in such high-risk speculative activities, with the losses being picked up by the general public.

There is no doubt that Cassidy is correct, and that the analyses of “left-left” thinkers like Sweezy, one of Monthly Review‘s founding editors, and Chomsky, an MR author, have been generally on the mark in pointing out that such outcomes are to be expected in the state management of the economy. Sweezy’s theory of the state’s economic role was far from being a simple one. He argued that although a “class-mediation” theory of the state might be appropriate in some realms, where the state’s economic policy was concerned a “class domination theory” was more appropriate, taking into account the state’s primary role as a guarantor of property as first theorized by figures like Hobbes and Locke. “Historically,” Sweezy observed, “control over capitalist accumulation has never for a moment been regarded as a concern of the state; economic legislation has rather had the aim of blunting class antagonisms so that accumulation, the normal aim of capitalist behavior, could go forward smoothly and uninterruptedly” (Paul M. Sweezy, The Theory of Capitalist Development [New York: Monthly Review Press, 1970], 240–50, 348–52).

Today we can add to this—in accord with Sweezy’s and his MR coeditor Harry Magdoff’s argument up through the 1990s—that in a period characterized by the financialization of the accumulation process, the capitalist state is effectively prohibited from constraining finance to any great extent. To do so would be to go against the main means by which wealth is being amassed and accumulation (indirectly) promoted in our time. This means that there can be no real protections offered by the state against the development of further financial bubbles, and that it is inevitable that any limited regulations on financial speculation put in place during a crisis will be removed during business cycle upswings. As John Bellamy Foster and Robert W. McChesney wrote in The Endless Crisis (New York: Monthly Review Press, 2012, 46–47), “There are…strong forces pushing for the reinstitution of financialization via the state, with the idea of getting the whole speculative momentum going again. In some cases, this is under the deceptive guise of very modest moves to financial regulation in order to promote confidence and to ‘legitimize’ the system…. There is no denying…that restoring the conditions for finance-led expansion has now become the immediate object of economic policy in the face of a persistently stagnation-prone real economy.” Under these circumstances, it is hardly a surprise that the state is now removing these very modest regulations—a process that is bound to continue. This is meant to give new impetus to capital accumulation and economic growth—but at the inevitable cost of a bigger, more uncontrollable financial and economic crisis sometime in the, perhaps not-too-distant, future.

The January 2015 issue of Monthly Review focused on the outstanding radical and militant folk musician Pete Seeger, who was a collector and promoter of songs from various social movements. But Pete was also a major movement figure: a socialist, environmental, civil rights, and peace activist. He was at the core of every major struggle from the mass trade union organizing of the 1930s to the Occupy movement that began in 2011. From nearly its launch, he was a contributor, friend, and supporter of MR. Seeger stood as a constant reminder that there cannot be effective protest movements without protest songs. Music, especially Pete’s kind, has often been the lifeblood of struggle.

It is therefore significant that just as our January issue went to press in early December, an Associated Press story appeared by Lisa Leff, “Police Demonstrators Inspire New Protest Songs,” stating: “The killings of Eric Garner and Michael Brown have inspired a musical outpouring perhaps unseen in the U.S. since Pete Seeger helped make ‘We Shall Overcome’ a civil-rights standard in the 1960s. Older songs are being deployed for a new generation. New compositions are being widely shared.” Seeger’s pivotal role as singer-protester is mentioned a couple of times in the article and the question is raised whether this is now being reproduced in our time. Those wanting to learn more about why Seeger was such an important figure and why we need others like him today are urged to look back at the January issue of MR.

Dave Broad, a frequent contributor to Monthly Review in the 1980s and ’90s, died on December 22, 2014, age 61. For those unacquainted with Broad’s work, we strongly recommend his review, “Fordism and Imperialism” (MR, March 1990), critically addressing fashionable left attacks on imperialism theory—the refutation of which is even more important today.

It only just came to our attention that writer-activist, Marta Russell, who wrote on disability for MR—addressing this important struggle both in relation to the neoliberal attack (“Targeting Disability,” MR, April 2005) and in the context of a special issue on Prisons and Executions (“Disablement, Prison, and Historical Segregation,” with Jean Stewart, MR, July–August 2001)—died a little over a year ago on December 15, 2013, age 62. Her contributions, in MR and elsewhere, we believe, remain absolutely vital, in outlining a socialist approach to disability, upon which others who follow her can build. For more on her, see Keith Rosenthal, “Committed to a Caring Society,” http://socialistworker.org, January 3, 2014.

Correction: Samir Amin’s “The Return of Fascism in Contemporary Capitalism” (MR, September 2014) incorrectly states on page 10 that “Jorge Rafael Videla…went to war over the Malvinas Islands to capitalize on Argentine national sentiment for his benefit.” The Argentinian head of state at the time was Leonardo Fortunato Galtieri.

Crossing the River of Fire
Cricket and Revolutions