Dear Reader, we make this and other articles available for free online to serve those unable to afford or access the print edition of Monthly Review. If you read the magazine online and can afford a print subscription, we hope you will consider purchasing one. Please visit the MR store for subscription options. Thank you very much. —Eds.
Notes from the Editors
by The Editors
(Mar 01, 2015)
Topics: Ecology Places: Americas United States 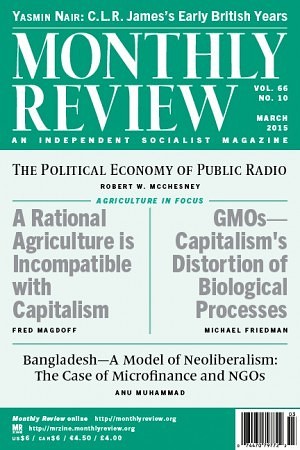 From its earliest years, Monthly Review has been distinguished among socialist publications by the degree to which it has incorporated environmental views into its fundamental perspective. Paul Sweezy’s 1950 article, “An Economic Program for America” (included in Leo Huberman and Sweezy’s Introduction to Socialism [Monthly Review Press, 1968]), listed conservation of natural resources and the elimination of destructive waste as two of the primary goals in the development of socialism. He called for the socialization, long-term planning, and conservation of “coal…oil and natural gas and all the other fuels which provide the lifeblood of modern industrial society.” Scott Nearing’s monthly column “World Events,” written for MR from the early 1950s to the early 1970s, regularly examined environmental, along with political-economic, developments. Nearing was a socialist economist and environmentalist. Together with his wife, Helen Nearing, he was a leader in the back-to-the-land movement, aimed at self-sufficiency and sustainability. Their classic work, Living the Good Life (1954), told of their experiences during two decades living on the land. With the publication of Rachel Carson’s Silent Spring in 1962, Nearing explored its wider ecological implications, contending that civilization had entered the “phase of suicidal destructivity…. Without doubt man has built a pyramid of potential destructivity…. Man is a destroyer as well as a builder. He has exterminated entire species…. He has destroyed forests and opened the soil to erosion. He has engaged in fratricidal wars that have wiped out one civilization after another and presently threaten to end western civilization” (Nearing, “World Events,” Monthly Review, November 1962).

These recollections of MR’s, and especially the Nearings’, early commitment to sustainability came to our minds in the context of conversations around the January 2015 issue of MR honoring Pete Seeger. He was a close friend, not only of the MR editors, but also of Helen and Scott Nearing. Seeger dedicated his song “Maple Syrup Time” to the Nearings, who inspired it with their Maple Sugar Book (1950). In “life or revolution,” Seeger sang, anything new and worthwhile took time, lots of time (“Maple Syrup Time”). It was necessary to “seize the minute, build a new world.” He seemed to say: Build it slowly, build it deep, and build it well. But build it now. For Seeger, in the midst of the McCarthy era and the Cold War, the answer was to dig down and find roots, reconnecting to the world around us. There was a need to merge the socialist struggle with a renewal of our relation to the earth, as symbolized by the Nearings (http://peteseeger.net/maplesyrup.htm; Margaret O. Killinger, The Good Life of Helen K. Nearing [Burlington: University of Vermont Press, 2007], 67-68). Seeger himself carried out this project in numerous ways, becoming a leading environmental activist, most notably in his launching of the Clearwater movement, as recounted in our January issue.

The model of creating sustainability and community as the cell of a new socialist society offered by the Nearings and Seeger is more important now than ever. But more than half a century later capitalism has extended its “suicidal destructivity” to the point that in the early twenty-first century we are running out of time on a global basis. This is the message of Naomi Klein’s This Changes Everything: Capitalism vs. the Climate. The central thesis of her book is that the solution to the climate-change emergency must now be an anti-capitalist (not just an anti-neoliberal) one, because in the limited time that we still have available nothing but a reversal in the dominant capital logic of society and the substitution of an alternative people logic will suffice.

In courageously presenting this conclusion, Klein opened herself up to a host of liberal gatekeeping attacks on her work, all of which presented the same criticism: contravening neoliberalism is within the bounds of the acceptable range of ideas as determined by the dominant media system; the critique of capitalism—even in the face of impending global catastrophe—is not. It was this question of the establishment response to Klein’s work that John Bellamy Foster and Brett Clark took up in the February 2015 Review of the Month, “Crossing the River of Fire.” Since the February issue of MR went to the printer, Klein herself has responded to these liberal attacks on her book:

[There’s something else that] has come up in a few reviews that I am confused by. The issue of: Is it anti-neoliberal? Or is it anti-capitalist? A few reviewers have made the claim that the case I’m making is against neoliberalism and not against capitalism. And I think I’m really clear in the book, and I don’t know how I could be any clearer: it’s both. That in terms of the tools that we needed to respond to this crisis when it hit in the late 80s and 90s, [these] were the very tools that were under fire by the neoliberal project: regulation, taxation, the very idea of collective action in society and so on. The advancement of free trade created more barriers. But because we have waited as long as we have, and we now need to cut our emissions as deeply as we need to, we now have a conflict not just with neoliberalism, but a conflict with capitalism because it challenges the growth imperative. So I realize this is a two-stage argument, but it’s both. (Naomi Klein, “Capitalism vs. the Climate: An Interview,” Human Geography 8, no. 1 [2015], http://hugeog.com)

Klein’s argument here is irrefutable. To be sure, in criticizing neoliberalism for removing the tools needed to address climate change she deftly avoids the issue of whether capital as a system could ever have seriously mitigated the problem. Nevertheless, what cannot be questioned on rational grounds is her contention that the degree of carbon dioxide reductions now needed to stay within the planetary carbon budget—a 3 percent per annum cut in carbon worldwide, which would in reality translate into a reduction of 8–10 percent per year in the rich countries—is incompatible with a system based on capital accumulation and exponential economic growth. Add to this the fact that climate change is only part of the overall planetary environmental crisis, which also encompasses such issues as the loss of biodiversity, the disruption of the nitrogen and phosphorous cycles, ocean acidification, degradation of freshwater resources, and disappearing land cover. What is needed, then, is what the great ecologist Howard Odum called “a prosperous way down” (see John Bellamy Foster and Brett Clark, “The Planetary Emergency,” MR, December 2012, 9–20). Klein is realistic and radical enough to realize that her recognition of this necessity, together with her readiness to act on it, puts her and the entire left climate movement that she represents in conflict with capital as a system—and not just with its most virulent form of neoliberalism. It is, as she says, a “two stage argument,” and we are now in the second stage. There is no avoiding the fact that the logic of capital accumulation must give way if we are to have a reasonable chance of saving civilization and humanity.

In January 2015, the Science and Security Board of the Bulletin of Atomic Scientists, in consultation with its Board of Sponsors, which includes seventeen Nobel laureates, reset its “doomsday clock” by moving it two minutes closer to midnight, to 11:57. The clock has been this close to midnight only three times before: (1) in 1949, when the USSR initiated its first atomic bomb test and Truman publicly announced the beginning of the nuclear arms race, (2) in 1953, when both the United States and the USSR engaged in above-ground hydrogen bomb testing (and the clock actually moved to two minutes to midnight), and (3) in 1984, when the Reagan administration massively escalated the arms race against the Soviets. Since 2007 the danger symbolized by the clock has included not just the possibility of global nuclear conflagration but also planetary climate change. Its metaphorical message is clear: the world is presently on a course of suicidal destructivity (American Association for the Advancement of Science, Science Insider, “Bulletin of Atomic Scientists Moves Doomsday Clock 2 Minutes Closer to Midnight,” January 22, 2015, http://news.sciencemag.org).

Susan Adelman sent us an eloquent letter in response to Holly Near’s article, “Who Was this Pete Fellow?” (MR, January 2015), from which we would like to quote: “Thank you for the wonderful tribute to Pete. Holly Near’s words made me cry, not only for what she had to say about Pete and all of us but because of the poetry in her use of language. If each of us who seeks a better world were deserving of such a tribute when we die, this would surely be a happier, safer, more peaceful planet—filled with song.”

Just as this issue was going to the printer, the left-wing party, SYRIZA, won a stunning victory in Greece’s national elections on January 25. The new government, which says it intends to end the debilitating austerity measures forced upon Greece by the European Union, announced that the new Finance Minister is Yanis Varoufakis, a noted economist and good friend of Monthly Review (and MR author). We wish him well and trust that, unlike most economists, he will put his superb skills to work on behalf of the long-suffering Greek people and, indeed, all those oppressed by the policies imposed by the ruling classes of the European Union and United States.