Dear Reader, we make this and other articles available for free online to serve those unable to afford or access the print edition of Monthly Review. If you read the magazine online and can afford a print subscription, we hope you will consider purchasing one. Please visit the MR store for subscription options. Thank you very much. —Eds.
Notes from the Editors
by The Editors
(Apr 01, 2015)
Topics: Marxism Philosophy Socialism Places: Americas United States Venezuela 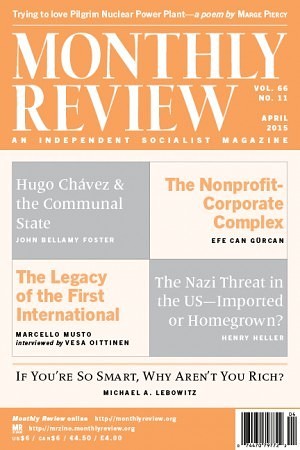 The Review of the Month in this issue (“Chávez and the Communal State” by John Bellamy Foster) focuses on the revolutionary political strategy introduced by Hugo Chávez and the Bolivarian movement in Venezuela. In the process it addresses how István Mészáros’s Beyond Capital played a key, strategic role in the development of Chávez’s thinking. Beyond Capital is a daunting philosophical work of around a thousand pages, while many of his other writings are nearly as challenging. MR readers will therefore be pleased to learn that we have just published a new book by Mészáros, The Necessity of Social Control (Monthly Review Press, 2015), expressly designed, as Foster writes in the book’s “Foreword,” as “an easily accessible work,” providing “a way into his thinking for the uninitiated” (9).

Yet, Mészáros’s new book is much more than that. In “The Mountain We Must Conquer,” the closing chapter of The Necessity of Social Control, he begins the process of generating a full-scale resurrection of the Marxian theory of the state. Early socialist theories of the state, beginning with Marx himself and extending up to the Russian Revolution, were focused primarily on the question of “the state and revolution,” raising such problems as the “withering away of the state.” However, later Marxian theories of the state in the 1960s and ’70s devoted their attention mainly to the capitalist state itself, outside any direct consideration of socialist transition. The main concern was what was referred to as the “relative autonomy of the state” from the economy and the capitalist class. In subsequent decades, this was carried forward with a flurry of research into theories of cultural hegemony and the relation of civil society to the state, inspired by various interpretations of Gramsci. But all such analyses tended to take the structure of the contemporary capitalist state for granted, failing to challenge, in particular, the dominant forms of representative government. Analysis was largely confined to the prevailing competition for state power and hegemony among political parties and elites in capitalist society. In the process, what was most distinctive about the classical Marxian approach to the state, with its emphasis on the revolutionary creation of what Mészáros calls “substantive democracy,” was often lost (236).

In The Necessity of Social Control Mészáros returns to the classical Marxian theory of the state by arguing that we have entered a new period of epochal transformation in which capital’s “all-engulfing catastrophic centrifugality,” evident in its planetary-wide destructive tendencies, is leading to severe contradictions in the command structure of the state, which can no longer exist entirely within the nation-state structure, but for which the system lacks any global alternative (296). The result is a more plutocratic, more unstable and dangerous, state system. This has put the question of a necessary withering away and dismantling of the dominant state apparatus, and its replacement by genuinely democratic-collective organization from below, once again on the historical agenda. In our time, Mészáros tells us, the critical theory of the state is either revolutionary and aimed at the promotion of substantive democracy, or it is no longer a critical theory of the state at all.

There has recently been a worldwide revival of interest and scholarship with respect to the work of Rosa Luxemburg. Much of this has been encouraged by the Rosa Luxemburg Stiftung based in Germany. Monthly Review Press has in the past published Luxemburg’s The Accumulation of Capital, as well as her Accumulation of Capital: An Anti-Critique (usually known just by its subtitle). In addition, we have published two anthologies of Luxemburg’s writings, the most recent being The Rosa Luxemburg Reader (Monthly Review Press, 2004), edited by Peter Hudis and Kevin B. Anderson. We are pleased therefore to note that volume 1 of Rosa Luxemburg, The Complete Works, edited and introduced by Hudis, was published in 2014 by Verso in London. This valuable work makes available in full to English readers for the first time Luxemburg’s Introduction to Political Economy—a major historical critique. This volume also contains Luxemburg’s book on The Industrial Development of Poland and her critique of the wages-fund theory. Volume 2 of the Complete Works will include a new translation of The Accumulation of Capital and the Anti-Critique, along with Luxemburg’s chapter on volumes 2 and 3 of Capital in Franz Mehring’s biography of Karl Marx. Subsequent volumes of The Complete Works will include seven volumes of political writings and five of correspondence.

A valuable work on Luxemburg, only just now translated into English from the Polish, is Tadeusz Kowalik’s 1971 Rosa Luxemburg: The Theory of Accumulation and Imperialism (Palgrave Macmillan, 2014). MR author Jan Toporowski, who edited and translated Kowalik’s book together with Hanna Szymborska, writes in his “Foreword” that this was Kowalik’s “master work.” In addition to reconstructing Luxemburg’s crisis theory, Kowalik delves into Marx’s reproduction schemes and the theory of monopoly capitalism/finance capitalism as it emerged, especially, in the work of Rudolf Hilferding. Kowalik later went on to provide a critique of the transformation of the Polish economy, under the force of neoliberal globalization following the collapse of the Soviet bloc, in From Solidarity to Sellout: The Restoration of Capitalism in Poland (Monthly Review Press, 2012). Still another Luxemburg-related work, The Legacy of Rosa Luxemburg, Oskar Lange and Michał Kalecki: Essays in Honour of Tadeusz Kowalik, edited by Ewa Karwoski and Toporowski, was published by Palgrave Macmillan in 2014. (MR readers may be interested in Foster’s chapter on “Polish Marxian Political Economy and US Monopoly Capital Theory: The Influence of Luxemburg, Kalecki, and Lange on Baran and Sweezy and Monthly Review.”)

We are pleased to announce that the Paul A. Baran Archive at Stanford is now open for online access. This makes fully available the very extensive correspondence over decades between Baran and Paul M. Sweezy, including their letters while they were writing Monopoly Capital. The archive also includes other correspondence and papers by Baran as compiled by his son, Nicholas Baran; it represents an invaluable treasury of work by two of the greatest Marxian political economists of the twentieth century. It can be accessed here: “Guide to the Paul Alexander Baran Papers.”

Jim Walters, an MR subscriber, sent us a letter which we would like to share with MR readers generally. Writing on the subject of the February Review of the Month, “Crossing the River of Fire: How Liberals Attack Naomi Klein and This Changes Everything,” by Foster and Brett Clark, he stated:

I called the New York office this morning about your outstanding lead essay in the month’s Monthly Review. I’ve read your article three times (and also purchased and started Klein’s book.) I feel your article clarifies so many things that I feel the need to share it widely….

In particular I liked your illustration of E.P. Thompson referring to William Morris’s crossing the “river of fire” by proclaiming himself a socialist. With your blow-by-blow account of the counterattack against Klein’s main thesis it presents a clear, and easily understandable introduction to what we’re up against.

I value Monthly Review more than any other publication I receive or read. I told [MR’s assistant editor] that when it comes in the mail, I usually sit down and read it cover-to-cover. I write frequent guest columns for our local newspaper (Iowa City Press-Citizen) and a regular barrage of letters to many other papers, including the New York Times and Wall Street Journal (my last letter there was on February 10, 2015). I often use information and ideas from MR in writing both columns and letters….

Thank you for your hard work in making Monthly Review such an important and valuable publication.

All we can say in response is that what keeps us going in this “hard work” is readers like Jim Walters.

Chávez and the Communal State
Marx on the Camino de Santiago