Dear Reader, we make this and other articles available for free online to serve those unable to afford or access the print edition of Monthly Review. If you read the magazine online and can afford a print subscription, we hope you will consider purchasing one. Please visit the MR store for subscription options. Thank you very much. —Eds.
Notes from the Editors
by The Editors
(Jun 01, 2016)
Topics: Climate Change Ecology Political Economy Stagnation Places: Americas United States 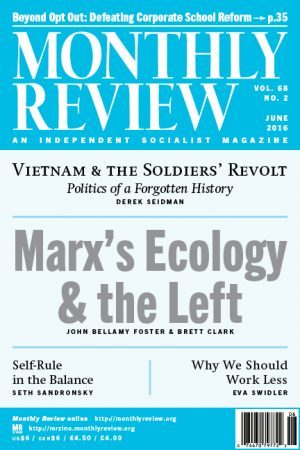 On April 8, 2016, in what has already become a historic case on the climate, Magistrate Judge Thomas Coffin of the United States District Court of Oregon ruled against a motion to dismiss, in favor of the youthful plaintiffs in the Children’s Trust lawsuit (Kelley Cascade Rose Juliana, et al. v. United States of America, et al.) and against the defendants, consisting of the federal government and the fossil-fuel industry. The twenty-one young people constituting the principal plaintiffs, ranging in age from 8 to 21, insist that the federal government has an obligation to protect the climate for the future on their behalf under the public trust doctrine, based on the fifth and ninth amendments to the U.S. Constitution. They claim, as stated in Coffin’s ruling, that “government action and inaction…threatens catastrophic consequences” (http://ourchildrenstrust.org). The plaintiffs in the suit also include climatologist James Hansen, as a guardian for future generations. The suit focuses on carbon dioxide emissions and the need for government action to reduce carbon dioxide concentrations to 350 parts per million. Since the United States alone accounts for about a quarter of global carbon emissions, federal government action and inaction in this area, it is argued, are of decisive importance.

On the other side, the federal government is joined in the defense by the National Association of Manufacturers, the American Fuel and Petrochemical Manufacturers, and the American Petroleum Institute—trade organizations that together represent most of the world’s largest coal, oil, and gas companies. Coffin had previously granted the trade associations the right to join with the federal government as co-defendant intervenors.

During the March 9, 2016, court hearing on the Children’s Trust case, hundreds of people (including a number of MR associates and friends) turned out in support of the young plaintiffs and the planet. The entire fifth grade of Edison Elementary School in Eugene gave individual presentations, accompanied in each case by their personal art work, on what they each wanted to see protected in the environment, all chanting “Everything is Connected to Everything Else.” The effect was stunning. Pictures of the elementary school students holding their signs and cascading down the steps to the courthouse went around the world (“21 Kids Are Suing the Federal Government for Not Doing Enough About Global Warming,” Mashable, April 11, 2016, http://mashable.com).

The court hearing on whether to dismiss the case revolved around such issues as whether the public trust doctrine can be applied by a federal court as a matter of federal common law; the ability of the plaintiffs to show they were negatively affected and their individual rights violated; and whether the courts were justified in intervening in an issue normally seen as the sphere of the executive and legislative branches. Public trust doctrine originally focused on damage to navigable water areas, and consequently the question of the effects of climate change on the Pacific Ocean along the Oregon coast is an important issue in the case.

The defendants’ argument to dismiss was directed principally at what they contended were limits on the federal government’s public trust responsibility. It thus turned on whether the United States was obligated simply to follow capitalist precepts with respect to the natural-physical environment, or whether the government had a public trust to maintain the environment for the population and for future generations, going beyond the rules of the market. The turning point in the hearing was when Judge Coffin asked the defendants if Congress had the right to sell the Pacific Ocean within its territorial waters (reaching out two hundred miles) to a private corporation, and whether that would violate a federal public trust. The lawyers for both the federal government and the representatives of the fossil-fuel companies answered that Congress had such a right to sell the entire Pacific Ocean within U.S. territorial waters to a private corporation, and that no federal public trust was involved. As Coffin wrote in his decision:

At the hearing on defendants and [co-defendant] intervenor’s motions to dismiss, the court queried their counsel whether, hypothetically, Congress could alienate the territorial waters of the United States off the West Coast to a private corporation, or whether that would implicate a public trust issue under the Constitution. Both parties suggested Congress could cede the territorial waters to a private corporation, and that PPL Montana, LLC forecloses any argument that the public trust doctrine applies to the federal government.

As explained above, I cannot read PPL Montana, LLC, given the context of the argument being addressed by the Court to have such a sweeping and profound effect. Nor can I imagine that our coastal sea waters could possibly be privatized without implicating principles that reflect core values of our Constitution and the very essence of the purpose of the nation’s government.

Magistrate Judge Coffin, at the time of this writing, is to consider objections and responses to objections before the case can proceed; then it shall come before Federal District Judge Ann Aiken in the same court. Judge Coffin’s opinion guarantees that this landmark case will be treated with respect and attention as it moves forward through the courts. Hansen called it “a ruling that may reverberate in history” (Hansen, “Historic Victory in Court,” April 8, 2016; “Federal Court Rules on Climate Change in Favor of Today’s Children,” Forbes, April 10, 2016).

In its March 26, 2016, issue, the Economist, not known for its criticisms of capitalism, carried a cover story called “Too Much of a Good Thing,” on the extraordinary growth of monopoly power and monopoly profits in the U.S. economy, replicating the kind of empirical research provided a number of years before in John Bellamy Foster, Robert W. McChesney, and R. Jamil Jonna, “Monopoly and Competition in Twenty-First Century Capitalism,” Monthly Review, April 2011 (see also John Bellamy Foster and Robert W. McChesney, The Endless Crisis [New York: Monthly Review Press, 2012]). The Economist did not of course cite MR. Nevertheless, the MR article has received an extraordinary amount of attention, and has been cited, for example, by Nancy Folbre and Paul Krugman in articles in the New York Times, and more recently in the June 3, 2015, issue of Industry Week. The latter article used the MR piece to ground its thesis of a “second gilded age,” anticipating the argument in the Economist. (See Nancy Folbre, “Who Rules the Global Economy,” New York Times, November 7, 2011; Michael Collins, “Is Manufacturing Industry Consolidation Stifling Competition and Innovation?” Industry Week, June 3, 2015; Paul Krugman, “Barons of Broadband,” New York Times February 16, 2014, citation in online version. Krugman relied on the Foster, McChesney, and Jonna article as the empirical evidence for his contention of growing economic concentration in the U.S. economy.)

Referring to the article in the Economist a few days before, former U.S. Treasury Secretary Larry Summers argued in the Washington Post, on March 30, 2016, that monopoly power was the key to secular stagnation (“Corporate profits are near record highs. Here’s why that’s a problem,” Wonkblog, http://washingtonpost.com). “It could be,” he wrote, that “the higher profits” now being seen in the U.S. economy “reflect an increase in monopoly power. If monopoly power increased, one would expect to see higher profits, lower investment as firms restricted output, and lower interest rates as the demand for capital was reduced. This is exactly what we have seen in recent years! …The fact that only the monopoly-power story can convincingly account for the divergence between the profit rate and the behavior of real interest rates and investment, along with the suggestive evidence of increases in monopoly power, makes me think that the issue of growing market power deserves increased attention from economists and especially from macroeconomists.” Paul Krugman then chimed in on April 18, 2016, with a piece in his New York Times column entitled “Robber Baron Recessions.” “Suppose,” he stated, “that those high corporate profits don’t represent returns on investment, but instead mainly reflect growing monopoly power…. The result would be what we see: an economy with high profits but low investment, even in the face of very low interest rates and high stock prices.”

The arguments offered by Summers and Krugman here—though in their cases devoid of the deeper critique of the regime of capital accumulation—closely resemble theses long associated with the political-economic tradition represented by Paul Baran and Paul Sweezy’s 1966 work Monopoly Capital. Perhaps recognizing this, the Irish Times, pointedly ran Krugman’s article on the following day under the title: “Paul Krugman: Monopoly Capitalism Is Killing the U.S. Economy.”