Dear Reader, we make this and other articles available for free online to serve those unable to afford or access the print edition of Monthly Review. If you read the magazine online and can afford a print subscription, we hope you will consider purchasing one. Please visit the MR store for subscription options. Thank you very much. —Eds.
Notes from the Editors
by The Editors
(Jun 01, 2018)
Topics: Movements Political Economy State Repression Places: Americas United States 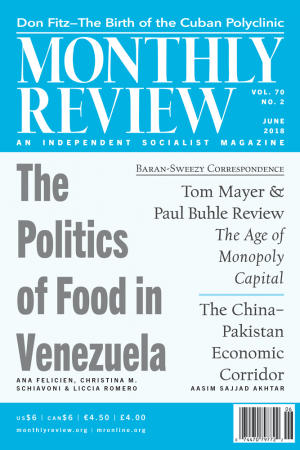 With the eruption in March of the scandal around Cambridge Analytica and Facebook, articles raising the alarm on “surveillance capitalism” are suddenly everywhere. The term was coined in MR, in an article by that title by John Bellamy Foster and Robert W. McChesney, for the July–August 2014 issue, also titled “Surveillance Capitalism.” The issue contained several articles by leading analysts of new systems of digital spying in both the United States and abroad, including Rishab Bailey, Beatrice Edwards, Alfred W. McCoy, Jean-Claude Paye, Prabir Purkayastha, David H. Price, Lauren Regan, Michael E. Tigar, and David Vine. Much of the issue was motivated by the controversy unleashed by Edward Snowden’s leaks, which revealed the U.S. government’s massive domestic surveillance program. But it also dealt with the links between such systems and contemporary capitalism as a whole.

Foster and McChesney’s article emphasized the historical development of a surveillance complex in the United States, beginning in the 1950s with an alliance between Madison Avenue and the Pentagon, leading to the creation of satellite technology, Arpanet, and then the Internet, and culminating in the current phase of data mining, financialization, and cyberwar. The key was to understand how the military and corporations were joined at the hip in the massive surveillance program that characterized the digital age, beginning with Eisenhower’s military-industrial complex. Although much of the debate over the national security state arising from the Snowden revelations had focused simply on the dangers of corporations colluding with the government (in addition to direct state spying), Foster and McChesney went on to debunk the prevailing assumption that massive corporate-controlled data banks were themselves secure, or that firewalls prevented personal information from circulating out of control. Rather, at the core of the system of capitalist surveillance was the selling of people’s information to the highest bidder as an accumulation strategy. In the new surveillance complex, corporations, the military, and domestic security forces had become increasingly interdependent, as recently highlighted by Google’s work on drones for the U.S. military—an issue raised in Foster and McChesney’s article four years ago.

In 2015, Shoshana Zuboff, an emeritus professor at Harvard Business School, took up the term “surveillance capitalism” (without attribution to MR), in an analysis that drew considerable interest in academic circles and soon became the predominant use of the concept. In her account, Zuboff defined surveillance capitalism more narrowly as a system in which surveillance of the population is used to acquire information that can then be monetized and sold. The object of her research was thus to study the interrelations between corporations and individual behavior in this new system of commodified spying. But such a view effectively divorced surveillance capitalism from class analysis, and from the overall political-economic structure of capitalism—as if surveillance could be abstracted from monopoly-finance capital as a whole. Moreover, it largely sidestepped the issue of the symbiotic relation between the military and private corporations—primarily in marketing, finance, high tech, and defense contracting—which was the central focus of Foster and McChesney’s analysis.

With the Cambridge Analytica/Facebook scandal and subsequent protests by Google employees in response to the company’s military drone program, all these issues have broken wide open, and the question of surveillance capitalism is being reconsidered once again—but this time in the wider context of monopoly-finance capital and data harvesting. For readers who wish to understand how the analysis of surveillance capitalism has broadened in line with MR‘s original treatment, we recommend several recent articles, including Elliott Gabriel, “Pentagon Capitalism and Silicon Valley,” Mint Press News, April 6, 2018, http://mintpressnews.com; Karl Rogers, “What Facebook and Cambridge Analytica Should Teach Us About Big Brother and Big Data,” The Canary, April 8, 2018, http://thecanary.co; Mitch Joel, “Facebook and Cambridge Analytica Have Just Confirmed It: Online Privacy Is Dead,” Maclean’s, March 19, 2018; and Tom Walker, “Deleting Facebook Isn’t Enough,” Red Pepper, March 30, 2018, http://redpepper.org.uk.

We receive many notes and letters from readers, most of which we answer on an individual basis. At times, however, we are sent things we consider worth sharing more widely. Several months ago, MR editor John Bellamy Foster was pleasantly surprised to receive in the mail a well-worn hardback copy of the first edition of Ivy Pinchbeck’s Women Workers and the Industrial Revolution, 1750–1850, published in 1930. For those unfamiliar with Pinchbeck’s work—and this seems to include a considerable number of contemporary scholars on women in nineteenth-century Britain—it remains the classic, still indispensable account of the central role that women played as workers in factories and sweatshops in the Industrial Revolution. When it appeared, Pinchbeck was a lecturer in economic history at Bedford College in London, and the depth and breadth of material she uncovered through her laborious research still astounds. Foster and Brett Clark cite the work in their January 2017 Review of the Month on “Women, Nature, and Capital in the Industrial Revolution.”

Slipped between the book’s pages was the following letter from our friend Myrna Wood in Canada:

Enclosed is an historic copy of Ivy Pinchbeck’s Women Workers and the Industrial Revolution, 1750–1850. This book taught me so much about women’s history back in the ’60s.

After reading your article in the January issue of MR I decided to send it to you. You and Brett may use it or share it with another scholar of women’s history. Over the years I have been disappointed at the articles MR has published on women’s issues but now two men have written something worth reading. ☺

Since the early years of the Women’s Liberation Movement, most women complained about Marx and his followers ignoring women’s work. It was clear to me that since most of them were academics from the middle class, they did not realize that the word “worker” included women who were from the beginning of industry the workers’ class! The problem still plagues the work.

I hope the book is of some value to you and thanks for all your work.

Having already replied to her personally, we would also like to offer our public thanks to Myrna Wood for this wonderful gift. We will put Pinchbeck’s book to good use in the present and future, and we hope that many MR readers will search it out. They will not be disappointed.

The Politics of Food in Venezuela
1862 Preface to Agricultural Chemistry