Dear Reader, we make this and other articles available for free online to serve those unable to afford or access the print edition of Monthly Review. If you read the magazine online and can afford a print subscription, we hope you will consider purchasing one. Please visit the MR store for subscription options. Thank you very much. —Eds.
Notes from the Editors
by The Editors
(Jul 01, 2018)
Topics: Ecology Marxist Ecology Places: Americas United States 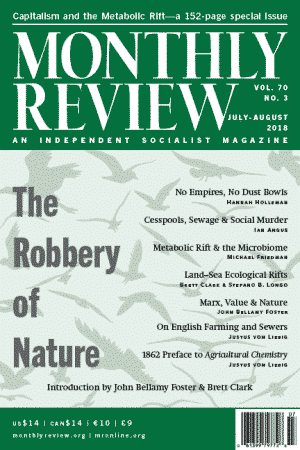 The prefigurative moment in the broad tradition of thought known as ecosocialism can be traced back to the 1960s and ’70s, in the work of such thinkers as K. William Kapp, Barry Commoner, Virginia Brodine, Murray Bookchin, Shigeto Tsuru, Rudolf Bahro, Raymond Williams, Paul M. Sweezy, Herbert Marcuse, Howard Parsons, Charles H. Anderson, and István Mészáros. These writers saw the relation between Marxism and ecology as relatively unproblematic, and drew directly on Karl Marx, Frederick Engels, and Marxism in general to develop their ecological critiques of capitalist society. (A related development occurred in late Soviet thought, as scholars including E. K. Federov, Ivan T. Frolov, and I. P. Gerasimov made a significant attempt to return to Marx’s ecological ideas.)

This changed dramatically from the late 1970s through the 1990s, with the emergence of a hybrid “red–green” approach to what then came to be known as “ecosocialist” thought. This mode of analysis, which has included such important figures as Ted Benton, André Gorz, James O’Connor, Joel Kovel, the early Michael Löwy, and the early Ariel Salleh, highlighted what they perceived as the ecological flaws of Marxism, including those of the classical theories of Marx and Engels. Although often playing an important critical role, such thinkers tended to graft Green theory onto Marxism (or sometimes Marxism onto Green theory), with the Green element often predominant. The result was a centaur-like hybrid construction, whose two parts were never fully integrated.

In the late 1990s, a new ecological Marxist strand within the ecosocialist tradition arose—partly in response to the earlier hybrid, red-green approach—which returned to the foundations of classical historical materialism, chiefly inspired by the recovery and renewal of Marx’s theory of metabolic rift. This mode of inquiry was advanced by such figures (in addition to the contributors to this issue) as Elmar Altvater, Paul Burkett, Fred Magdoff, Richard York, Chris Williams, Del Weston, Rebecca Clausen, Eamonn Slater, the later Löwy, the later Salleh, Andreas Malm, and Kohei Saito. Many went on to further extend eco-Marxist analysis, using the metabolic rift methodology to analyze a wide range of ecological issues, including climate change, nutrient loading, deforestation, urbanization, animal abuse, oceanic crises, and environmental justice.

In our view, ecosocialist praxis owes its recent rapid growth and its global impact to the discussions and debates emanating from all three of these approaches, notwithstanding their sometimes sharp differences. Nevertheless, this special issue of MR is dedicated specifically to the further development of the ecological critique embodied in Marx’s theory of metabolic rift—with which the magazine has been closely associated—and hence to the continuing evolution of ecological Marxism. All the articles in this issue thus explore the metabolic rift perspective in various ways, using it to uncover the core socioecological contradictions of capitalism, as well as possible paths toward a new organic system of social metabolic reproduction—one that will meet the needs of humanity as a whole while protecting the earth and human generations to come.

In their introduction, John Bellamy Foster and Brett Clark describe the relation between the “robbery of nature” and the metabolic rift, building on the ideas of Justus von Liebig and Marx. Hannah Holleman examines the “dust-bowlification” of the earth in the twenty-first century and its connections to the Dust Bowl of the 1930s, seen as intrinsically related to questions of economic, social, and environmental justice. Ian Angus examines how the nineteenth-century disruption of the soil, as depicted in the analysis of Liebig, Marx, and their contemporaries, was related to the crisis of pollution and the disposal of human waste in the new urban industrial centers, including the question of the return of these wastes to the soil. Michael Friedman shows how the concept of metabolic rift can illuminate the interrelated social and ecological disruptions of the human microbiome. Brett Clark and Stefano B. Longo study the land–sea rift associated with nutrient overloading from nitrogen and phosphorous runoff, giving rise to numerous dead zones in the ocean. Finally, John Bellamy Foster’s article “Marx, Value, and Nature” addresses attempts by some left environmental thinkers to develop models that destabilize the labor theory of value, extending the notion of the generation of (economic) value to everything in the natural world, and thereby erasing the main contradictions between the capitalist system and the Earth system.

One of the crucial intellectual developments of our time is the rapid growth of inquiry into ecological Marxism in China, where vital debates are developing on the course of “ecological civilization.” (See Zhihe Wang et al., “The Ecological Civilizations Debate in China,” MR, November 2014; Andre Vltcheck, “China’s Determined March Toward Ecological Civilization,” Investig’Action, May 16, 2018, http://investigaction.net.) We recently obtained a copy of a new book, The Ecological Crisis and the Logic of Capital by Chen Xueming (Brill, 2017), that will no doubt be of interest to readers following these discussions. The book is divided into three parts, each about 200 pages in length. The first two deal with “Western ecological Marxism” (the preferred designation in China), with Part One focusing entirely on the ideas of MR editor John Bellamy Foster, and Part Two on the work of other ecosocialists/Western Marxists, including Marcuse, Gorz, O’Connor, Burkett, David Pepper, Ben Agger, and William Leiss. Readers already familiar with Western ecosocialism, however, will be most interested in Part Three, in which Chen develops his own analysis of the wider implications of ecological Marxism, and especially the section’s last three chapters, which deal directly with its implications for China.

MR readers will be interested to know that the users of the website Goodreads have compiled a list of the 104 top books in the Critical Thinking category. In second place is John Bellamy Foster, Brett Clark, and Richard York, The Ecological Rift (Monthly Review Press, 2010). The top five books on the list are (1) Tim Butcher, Blood River; (2) The Ecological Rift; (3) Milan Kundera, The Unbearable Lightness of Being; (4) Naomi Klein, The Shock Doctrine; and (5) Victor E. Frankel, Man’s Search for Meaning. For the complete list, visit http://goodreads.com.

After seventeen years as associate editor of MR, Michael D. Yates is stepping down in order to focus his energies on Monthly Review Press, which has flourished in recent years under his directorship. All of us at MR would like to offer our heartfelt gratitude to Michael for helping make MR what it is today, while also contributing to the magazine’s classic tradition of political-economic critique. We look forward to continuing to work together at the press. Thank you, Michael!

In his place, beginning with this issue, Brett Clark, a member of MR editorial committee for almost two decades (and himself a former director of the press), has agreed to take on the role of associate editor of the magazine. Congratulations, Brett!

Elmar Altvater died on May 1, 2018, at age seventy-nine. Born in Germany in 1938, he first read Marx’s Capital at age twenty-three and was to emerge as one of the world’s leading Marxist political economists. In 1971, he became a professor of political economy at the Otto Suhr Institute at the Free University of Berlin, a position he held until his retirement in 2004. His most influential work on ecosocialism (and on the role of money in capitalism) was The Future of the Market (1991). His final two books—not yet translated into English—were Rediscovering Marx and Rediscovering Engels.

In a July 2017 article entitled “A Gap in Marx’s Work or the Ignorance of the Reader?” (Marx 200, July 20, 2017, http://marx200.org), Altvater criticized left thinkers who contended that nature itself creates commodity value under the capitalist system, and who faulted the labor theory of value (particularly the Marxian version) for arguing otherwise. Altvater described this dominant view as a form of commodity fetishism, which disguises the underlying contradictions between capital and nature and between capital and labor—in effect concealing exactly what Marx sought to uncover. For bourgeois economics, Altvater wrote, “nature is only interesting as natural capital; human beings as human capital.”

Altvater’s views on the ecological contradictions of capitalism can also be seen in an important review that he wrote for MR in January 2007 on Paul Burkett’s Marxism and Ecological Economics. He ended his deeply thoughtful inquiry into Burkett’s book with the pregnant question: “What are the forms of reappropriation of the alienated and dispossessed spaces (and times) of peoples? The struggles for reappropriation are going on today, everywhere. There is an urgent need for theoretical clarification.” As always, his work searched for the next question, thereby capturing the historical specificity of our times and the changing needs of praxis.

Joel Kovel died on April 30, 2018, at age eighty-one. Born in Brooklyn in 1936, he received his medical degree from Columbia University and went on to direct the Albert Einstein Medical School in the Bronx from 1977 to 1983, serving as a professor until 1986. He taught at Bard College from 1988 to 2009. Always politically active, he ran for the U.S. Senate in New York on the Green Party ticket in 1988 and against Ralph Nader in the Green Party primary in 2000. In 2001, Kovel co-wrote The Ecosocialist Manifesto with MR author Michael Löwy; two years later, he took over as editor-in-chief of the journal Capitalism Nature Socialism following the retirement of its founder, James O’Connor, a position that he held until 2012. In 2007, he helped form the International Ecosocialist Network.

Kovel wrote several important books, including White Racism (1970), History and Spirit (1991), and Overcoming Zionism (2007). His main ecosocialist work was The Enemy of Nature (2007), in which he made his most important innovation through the reintroduction, based on Marx, of the concept of “usufruct,” the legal right to use the property of another so long as it is not damaged—a concept he employed to move toward collective property rights and the protection of nature. Kovel wrote almost twenty articles for MR in the 1980s and ’90s. One of these, “The Enemy of Nature” (February 1997), introduced some of the theses developed a decade later in his book of the same title. In March 1997, he wrote a particularly insightful review for MR of István Mészáros’s Beyond Capital. Near the end he declared, quite characteristically: “As bizarre as it may sound, there is nothing stopping socialism but the absence of a socialist spirit. The numbers are there, justice is there…but the spirit is missing.” Kovel never ceased trying to instill such a “socialist spirit” in those around him through the example of his own radicalism.

The Robbery of Nature
Beyond the Class–Race Binary