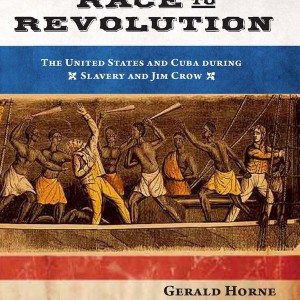 Race to Revolution: The United States and Cuba during Slavery and Jim Crow
By Gerald Horne

Reviewed by Elena A. Schneider, University of California, Berkeley

Gerald Horne’s latest book is an ambitious transnational history of the United States and Cuba from the 1700s to the 1959 Cuban Revolution. It focuses on the shared and interconnected histories of slavery, the slave trade, Jim Crow, and the struggles against these oppressive systems in the two regions. The book marks another contribution to Horne’s prodigious body of work on the history of African diaspora, slavery, imperialism, liberation movements, and the Cold War. Along with Frank Guridy’s Forging Diaspora (2010), Race to Revolution works to reorient the majority of scholarship on the U.S.-Cuba dynamic by foregrounding the role and importance of people of African descent. Horne focuses on the interaction of African Americans and their counterparts in Cuba and the way the histories of slavery and racism were mutually influential across the Florida straits. The result is a comprehensive and well-researched narrative that offers a longer chronological sweep than previous examinations and compelling insights for those who study both places.

Making extensive use of the abolitionist and African American press, Horne charts shifting perceptions of events in Cuba across a long swathe of the eighteenth, nineteenth, and early twentieth centuries—through the Amistad mutiny, the Spanish American Cuban War, the tragic massacre of the Independent Party of Color in 1912, and the 1933 revolution. Across this time, Horne unlocks the complexity of African American attitudes. For example, African Americans expressed a diversity of opinions regarding entry into the war of 1898, including opposition on anti-imperialist grounds. Horne counterposes African Americans’ enthusiasm for Cuba’s mulato Gen. Antonio Maceo with an awkward sympathy for the (also mulato) Fulgencio Batista in the 1950s. Tracing this history all the way to the Cuban Revolution, the author elucidates the interrelated processes through which slavery and Jim Crow grew, then declined and disappeared in the two places.

Scholars of U.S. history may be surprised by what they find here. In the early chapters, Horne shows how the rapid growth of the slave trade in nineteenth-century Cuba was facilitated and often driven by U.S. slave traders and capital investment out of New York and New England. He also demonstrates the ripple effects that the growth of slave trading in mid-nineteenth-century Cuba had on secondary markets in Florida, Louisiana, and Texas. By one estimate, in 1840 U.S. nationals controlled one-third of all wealth on the island and owned thousands of slaves, in addition to holding property jointly with Spaniards. As Horne illustrates, the growth of slavery in the two places was intertwined. In the 1830s likely more than fifteen thousand enslaved Africans were sent annually for resale from Havana to Galveston, where they were sold for four times their original price. The 1850s saw the enormous expansion of slave holding and sugar cultivation in Cuba, with 85 percent of the nation’s sugar heading to U.S. markets. Horne’s account of northern U.S. investments in Cuban slavery complicates easy notions of a sectional divide in support for the annexation of the island and/or the abolition of the slave trade and slavery.

By broadening our understanding of U.S.-Cuba relations beyond diplomats and slaveholders in the U.S. South, the author brings new complexity to nineteenth-century debates regarding annexation and feared “Africanization” of the island (through extensive slave trading). As Horne shows, debates about Africanization and annexation from the 1840s and 1850s circled back around in the 1870s through the 1890s, during a period when annexationism was thought long dead. At that point, concern among North American whites about containing the black nationalist political threat from the island and counteracting Spanish and French opportunism in the Americas during the U.S. Civil War interacted with white and black abolitionist organizing in support of the island. Race to Revolution also provides a fascinating portrait of Florida as a space between the two nations. With so many immigrants arriving from Cuba beginning early in the nineteenth century, Florida became a place where the dissonance between Cuban and U.S. notions of race conflicted with the violence of Jim Crow and lynching. Cuba, in turn, represented for African Americans a symbolic escape from the more rigid confines of U.S. Jim Crow, as Horne shows through his treatment of baseball and jazz. The book’s weakest section may be its speedy gloss of Cuban politics from the 1930s to the 1950s, which probably attempts to do too much. Horne argues that U.S.-imposed Jim Crow during the 1898–1902 occupation of Cuba helped inspire a strong strain of antiracism in Cuban communism, in which AfroCubans played an especially prominent leadership role.

Thus, the “race to revolution” of the title seeks to draw direct cause-and-effect linkages between U.S.-imposed Jim Crow, the uprising of 1933, and the successful revolution of 1959. The argument is more nuanced than elaborated here, but still may allow the lens of race to oversimplify the complicated political panorama of Cuba across a thirty-year period and telescope somewhat the Castro brothers’ post-1959 communism with earlier iterations. That said, Race to Revolution is an impressive achievement in transnational history and a crucial resource for those trying to understand slavery, racism, and the U.S., Cuban, and African American pasts.

Entire review appears in the Journal of American History, vol. 102, no. 3