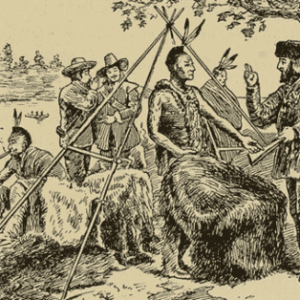 In this comprehensive study of the connections among capitalism, slavery and white supremacy, Gerald Horne, the Moores Professor of History and African American Studies at the University of Houston and the author of more than 30 scholarly books, takes a deep dive into the 17th century, revealing fallacies in what later ages have said about the earlier ones, showing the slow and steady consolidation of axes of differentiation in the service of capital, and ultimately connecting the choice in 2016 of “a vulgar billionaire”(29) with the cross-class coalition that originated in the colonial settlements of the New World.

The century began with Spain and Portugal ascendant, tens of thousands of Europeans facing capture and enslavement by Ottoman Turks, the merchant class subordinate, and the fate of the North American indigenes and enslaved Africans yet unsealed. In all but a few years, Europeans were at war with each other, sometimes embroiled in horrific massacres across the globe. For most of the century, England was nearly “a failed state” (86). By the end of the century, Britain was a global superpower, weaponry was sophisticated and armies hardened, and merchants were enjoying unheard of riches and power. The “apocalypse” that dawned in 1688 with the so-called “Glorious Revolution” ended the feudal monarchy, while allowing wholesale and unregulated enslavement of Africans and unfettered seizure of indigenous land. The century’s outcome still resonates today.

In nine chapters, Horne takes the reader through the processes and milestones along the way, from the British seizure of Jamaica to Bacon’s Rebellion, each step seemingly inexorably setting the stage for the next. Horne makes the argument that much is missed if one attempts to analyze Caribbean history separately from U. S. history. The world of settlement colonies was one interdependent whole, with intricate personal and structural ties. For example, seeing South Carolina as a colony of the fabulously wealthy Barbados shows the influence of island settlement colonies, where enslaved Africans far outnumbered European settlers, on the mainland colonies that adopted Caribbean slave codes as their own.

One theme that Horne returns to repeatedly is the misinterpretation of some settler developments as “progressive.” The first example is Roger Williams’ founding of the colony that would become Rhode Island. While Williams’ expulsion from the Massachusetts Bay colony after he had spoken out against the confiscation of land from the indigenous gives him a progressive aura, he subsequently behaved toward the indigenes every bit as abominably as the Puritans he criticized. The Jesuits, despite “progressive” discourse, led Maryland to be one of the first mainland colonies to recognize slavery as a matter of law. Horne shows that the eclipse of religion as an axis of differentiation in the settlement colonies served the purpose of uniting Europeans of all religions against enslaved Africans and indigenes. Those who applaud the century’s religious tolerance “confused a measure designed to gain an adequate racial supply with intentional avant-garde thinking” (112). The celebration of the American Revolution as a “novel display of patriotism” and “a great leap forward for humanity” is seen as a delusion; instead Horne characterizes the “revolution” as a “naked grab for land, slaves, and profit” (67).

Horne remains committed to analyzing the economic structures that underlay the changes that occurred over the course of the century, but is cognizant of their effects on the sensibilities of the people of the times. The early experience of Mediterranean piracy and enslavement of captured Europeans by the Ottoman Turks, instead of creating empathy, desensitized Europeans to the violence of slavery. Oliver Cromwell’s policies regarding the settlement colonies in the New World, his “Western Design,” aimed, in Horne’s words, to “reorganize the imperial economy around slave trading, slave labor, and state-sponsored piracy.” The piratical origins of the capitalism that developed infused it with “the ethos of the gangster” (94).

A new look at the primary sources allows Horne to reveal forgotten facts that have new significance now. In keeping with the project most associated with Herbert Aptheker, he acknowledges the resistance of the enslaved Africans, not just in what has become the United States and the Caribbean but in West Africa itself. Horne names rebellious Africans — Francisque Fabulé in Martinique and Juan Lubolo in Jamaica, for example — and documents their (fleeting) victories. He shows the influence of fear of retaliation by the enslaved gradually becoming codified in restrictive laws, eventually putting down rebellions so brutally that the death penalty could be imposed for any rebellious behavior, while the owner of the slave would be compensated for his loss, providing an incentive for “a fierce crackdown on slave resistance” (181).

Horne’s level of detail and his scope of historical understanding allow him to trace the shifting class, religious and national alliances that shaped the century. It was a time when Muslims could be allied with imperial forces in Britain against Spain, Puritans overthrew Catholics in the colony that became Maryland, and the Dutch could invade Peru, bringing the enslaved letters of manumission and weapons to use against the Spanish. While London’s merchant elite tended to support the monarchy, those who traded with the colonies tended toward republicanism. But by the end of the century, merchants won complete control over the “wildly profitable” slave trade, the monarch’s power was curtailed, and a kind of pan-Europeanism became a “new enlightenment” (22) attracting other Europeans to the Americas and united them against the dispossessed indigenes and enslaved Africans.

The rise of white supremacy simultaneously with the profits of the slave trade led to a particular kind of capitalism. Whiteness, a “toxic racial identity” (24), was a “new kind of aristocracy” (13). While the century began with a continuum of freedom and enslavement experienced by a variety of persons, by the end the indigenous were driven off their land and African slavery was entrenched and codified by a rigid racial politics. This synthetic whiteness endures in the present day. Horne argues that the resurgence of white supremacy in the late 2010s, in which “billionaires claim to be the tribunes of the ‘little guy’,” are “a replay of past cross-class coalitions when the high and mighty joined with poorer Europeans in mutually feasting upon the misery of those not defined as ‘white’” (191).

Valuable as this work is, it is sometimes a frustrating read. There is no list of works cited, and source authors’ names are not indexed. So at times, to locate a full citation of a source that had been previously cited, one has no choice but to scan through hundreds of earlier footnotes. Horne also assumes a level of information that not every interested reader will bring; it’s somewhat more poetic to refer to the “Palmetto State” but not all readers will be familiar with the nicknames that U. S. residents give to their states. Combined with sometimes convoluted sentences and a kind of coyness when directness is called for, Horne’s writing isn’t always kind to the reader. His insights, however, are worth the effort.