Starting with Adam Smith and David Ricardo two central questions have dominated the history of economic thought: Does capitalism, as a social economic system, provide social harmony? And, is capitalism inherently stable? Paul A. Baran and Paul M. Sweezy, the two most preeminent Marxian economists in America during the second half of the twentieth century, played a vital role in the debates surrounding these two questions in the 1960s. They also examined whether the class structure of capitalism, with its monopolization of the means of production, inevitably leads to extreme inequality and economic stagnation.

Following the Ricardo-Marx classical view, they saw capitalism as creating economic conflict and instability. To understand the nature of this conflict and instability, they focused on the interconnection between economic theory and social-historical changes. They also followed Marx’s view that ideology plays a critical role in establishing the social and moral parameters of any scientific method used in economic analysis. That is, economic theory has both a scientific and an emotive and ideological element. To comprehend the scientific aspect of any economic theory, one must grasp the ideological elements found in the methodological approach used. For Baran and Sweezy that meant social theorists need to recognize and articulate their ideological values. As Paul Baran pointed out in his legendary essay, ‘The Commitment of the Intellectual’ (1961), intellectual integrity requires social scientists to openly evaluate the values they hold and use in their ‘scientific inquiry’ and not ‘contract out’ of this commitment. This, of course, should lead to a discussion about those values and their social and ethical meaning. Unfortunately, most social scientists do ‘contract out’ of any serious discussion about ideology and values in their theories or models. According to Baran, the problem is not that we have values, but that we are often unwilling to recognize the role they play in our economic thinking and policymaking. Baran was particularly critical of neoclassical economic theory, which he believed went out of its way to dismiss the influence of power and ideology in our understanding of the development of capitalism.

For those interested in the debates on the role of power and ideology in economic theory and on whether social theories and social- historical processes are interconnected in ways that can lead to conflict and economic instability, this volume of correspondence between Baran and Sweezy from 1949 to 1964 will provide new insights and a better understanding of the development of Marxism and socialism in the United States after World War II. The Age of Monopoly Capital: The Selected Correspondence of Paul A. Baran and Paul M. Sweezy is an important book that covers a wide range of issues in the history of American Marxism, including the establishment of the socialist magazine Monthly Review, and the development of Marxian economic theory and its clashes with mainstream economics during the postwar era. The letters are particularly insightful on the intellectual process by which Baran and Sweezy wrote their classic book Monopoly Capital (1966).

Baran and Sweezy first met at Harvard in 1939. Baran arrived from London where he had been working as a representative for his uncles’ timber business. Baran, a native of Russia, had been exiled from the Soviet Union, mostly for abandoning Communism; before that, he had been forced to leave Germany, where he was studying, because of his hostility to Nazism. Wanting to pursue an academic career, but realizing it was impossible for him to do so in Europe at that time, he enrolled in Harvard’s graduate program in economics. After he arrived in Cambridge, Baran looked up Sweezy, who was a young instructor, and presented a letter of introduction from their mutual friend Oskar Lange. Sweezy later recalled their first meeting:

Paul had a very powerful personality, and one could be attracted to him immediately on meeting him, just as one could take an immediate dislike to him. He and I were drawn together at once, and our intellectual and personal friendship became ever closer and more meaningful to both of us during the next 25 years. (Huberman and Sweezy 1965, p. 28)

Though their friendship developed soon after they met, the time they spent together was limited initially by the war and then by Baran’s acceptance of a teaching position at Stanford. They shared ideas by letter writing. Sweezy described the intensity and the importance of their correspondence:

As it happened… we never for long lived in the same locality, so that much of our discourse was perforce by the written word. While he was alive I always found this deplorable. But now that he is gone I can appreciate its positive side. Up until about 1950, we corresponded sporadically and did not save our letters. But soon after he went to Stanford in 1949, we began to correspond regularly and soon discovered that it was necessary to save letters for reference and continuity. As a result I have a precious file of hundreds of his letters .…We exchanged views on current happenings here and abroad, tried out ideas on each other and developed them through criticism and discussion. Some of his best and most stimulating thought is in these letters…. (Huberman and Sweezy 1965, p. 28)

Indeed, that’s precisely what we find in the correspondence. One is repeatedly impressed by Baran’s acute and highly sophisticated discussions of the most significant and difficult political, social and economic issues facing the world during the postwar period, and by his constant questioning of orthodox and Marxian social theory. There is also in his letters a sense of hope that the socialist movement would reach a turning point in the world where ‘the proposition that humanity’s claim to life, to development, to happiness requires no justification’ (Huberman and Sweezy 1965, p. 80).

A volume of just the correspondence of Paul Baran would have been a significant contribution to economic and social thought, but  what makes this book stand out is the sophisticated and enquiring voice of Paul Sweezy, who many would consider the finest Marxian intellectual of the twentieth century. Sweezy’s Theory of Capitalist Development (1942) gave Marxian theory a new and clear voice during the Keynesian postwar era. Sweezy’s second most important book, written with Baran, Monopoly Capital (1966), is widely regarded as the best book on radical political economy ever published. The analysis of the development of modern capitalism in the latter work reflects the influence of the Polish economist Michal Kalecki. As one goes through the letters, one develops a better  understanding of the impact Kalecki had on Baran and Sweezy as they wrote Monopoly Capital.

Since surplus which cannot be absorbed will not be produced, it follows that the normal state of the monopoly capitalist economy is stagnation.…and this means chronic underutilization of available human and material resources .…Left to itself —that is to say in the absence of counteracting forces [such as public expenditures for social well-being, or ‘sales efforts’ by corporations] which are no part of what may be called the ‘elementary logic’ of the system —monopoly capitalism would sink deeper and deeper into a bog of chronic depression.

Counteracting forces do exist. If they did not, the system would indeed long since have fallen of its own weight. It therefore becomes a matter of great importance to understand the nature and implications of these counteracting forces.

Because of inefficiency and inequality under a capitalist market economy, the difference between the actual and potential surplus represents a loss to society, which Baran and Sweezy claim would not be found in a socialist economy. It must be noted that they have
some difficulty in quantifying the economic surplus and its distribution, but their arguments are nevertheless compelling and cannot be lightly ignored.

Another theme is imperialism. Baran had argued in The Political Economy of Growth (1957) that advanced countries like the United States extract surplus from Third World countries to expand their own consumption opportunities and reduce the level of exploitation of their own workers. This type of global exploitation justified for Baran and Sweezy the colonial revolutionary movements that were taking place worldwide in the 1950s and 1960s, with Cuba being a primary example.

An additional interesting theme in Monopoly Capital that is well discussed in the correspondence is the evolution of giant corporations in the United States. In the 1700s and 1800s most firms were small and competitive, but by the early 1900s we saw the development of large corporations and the emergence of new market structures like oligopoly and monopoly that allowed firms to administer their own prices and made them less dependent on external financing and less vulnerable to competitive pressures. Technological development and economies of scale enable firms to reduce production costs; with oligopolistic and monopolistic control, corporations are able to keep prices fixed, so that ‘there is a strong and systematic tendency for surplus to rise, both absolutely and as a share of total output’ (Baran and Sweezy 1966, p. 79). From here Baran and Sweezy explain how the economic surplus is distributed and absorbed in a modern capitalist society. The surplus can be used for investment, consumption, government social programs, or military expansion; it can also simply be wasted. The correspondence is filled with lively exchanges on how the surplus is distributed. The letters also provide new insights into Baran and Sweezy’s own interesting twist on how the failure to absorb the surplus can lead to economic stagnation. Because of the significant level of inequality in capitalist societies, firms face a continuing problem of insufficient aggregate demand. Since corporations are usually opposed to state efforts to redistribute income and wealth or to increase spending on social programs, they turn to military expenditures and imperialism as ways to spend the surplus to advance their interest and avoid economic stagnation.

In both Monopoly Capital and their correspondence, Baran and Sweezy seem to regard militarism as inevitable. They don’t believe that liberal Keynesian economic policies will work as a long-term solution to the surplus-absorption problem because of capitalists’ hostility toward the redistribution of the surplus to workers and the poor. What we should expect in the future is continued capitalist imperialism, which will increase inequality, exacerbate the problem of insufficient aggregate demand, and create global instability that will only reinforce the tendencies to economic stagnation. The only hope Baran and Sweezy give lies in the rise of national liberation movements in the developing world, and possibly a retreat from militarism by the United States as the costs of imperialism increase. But given the influence that corporations have over the United States government, we should not expect any challenges to the existing distribution of wealth and income.

Besides major insights about the writing of Monopoly Capital, the correspondence also provides sharp commentary on the misuse of resources in affluent societies and how capitalism leads to alienation and to the fetishization of commodities. But more importantly, Baran and Sweezy give us their views about the future and warn us that social and economic change will not come from a ‘rise of the proletariat,’ but when Americans become aware of the waste and power of the capitalist corporation. This message remains relevant today. 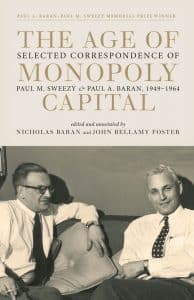