Dear Reader, we make this and other articles available for free online to serve those unable to afford or access the print edition of Monthly Review. If you read the magazine online and can afford a print subscription, we hope you will consider purchasing one. Please visit the MR store for subscription options. Thank you very much. —Eds.
by Staughton Lynd and Jane Slaughter
(Apr 01, 1994)
Topics: Capitalism History Inequality Labor Movements Political Economy Places: Americas Latin America United States 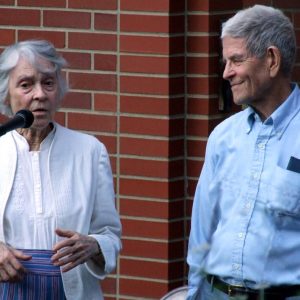 Staughton Lynd died on November 23, 2022 at the age of 92. We are republishing this interview from the Monthly Review archives in remembrance.

This is an excerpt from an interview with Staughton Lynd that appeared in The Progressive (February, 1994). It is reprinted with permission. The interviewer was Jane Slaughter, the director of Labor Notes.—The Editors

Jane Slaughter: And the final thing you’re working on?

Staughton Lynd: Finally, there’s the question of creating jobs. I’ve just become possessed by the hypocrisy of the Clinton Administration’s jobs rhetoric. I believe we’re in a period like the early 1960s. You have a Democratic President who makes idealistic and compassionate noises. This guy was elected to create jobs. But in reality, his program is to help corporations cut jobs. The profit-maximizing companies today are downsiz­ing. And the Clinton Administration is pushing “training”—which means you and I learning each other’s jobs, so next year one of us will be gone. The “jointness” that [Secretary of Labor] Robert Reich is pushing means, the boss says: “We’re going to lay off 30 percent of you, and the union can decide who.”

I think NAFTA is just the briefest introduction to the anger people are going to feel when they realize that Robert Reich is helping corporations to reduce jobs—that people are going to be kicked off welfare without jobs, that the health­care plan is not so much for extending coverage to anybody as for taking people off Medicaid.

At some point, working people get the message. I think people are going to go berserk when they realize Clinton isn’t going to cross the street to do something about jobs. He isn’t going to do anything that corporate American doesn’t want done.

We have to say, this isn’t a lifeboat where we decide who gets thrown to the sharks. That’s their idea. We have to play a different game.

We who say we’re socialists, we have a duty and an opportunity to talk to our fellow Americans, in Youngstown, in Saginaw, about what it would mean in our towns. We can go to the Federal Government and say, “You always find money for things you want to—the Gulf War, a $20 billion crime bill.”

Slaughter: You’ve said that there’s a large proportion of the popula­tion that corporate America doesn’t care about. Every auto worker I talk to says, “The companies are foolish not to keep lots of auto workers working in this country and pay us decent wages, because who will buy their cars if we don’t?” I don’t think it works that way anymore.

Lynd: In my opinion, American capitalism no longer has any use for, let’s say, 40 percent of the population. These are the descendants of folks who were brought over here in one way or another during the period of capital accumulation. They’re now superfluous human beings. They’re nothing but a prob­lem for the people who run the society. We have to take that in. And Clinton is lying even more than he knows he’s lying. He may believe that economic prosperity and more jobs tend to go together. But that’s not true anymore. People are just going to have to figure out for themselves what it would take to produce a livelihood for folks that the system has written off.

Slaughter: Are you a Marxist?

Lynd: I find myself in an odd position about Marxism, and I’ve been in it a long time. Namely, to the Marxists, I seem like some sort of middle-class sentimentalist. To everyone else I seem like a hardcore Marxist. One of the reasons I like Latin America is that they’re sort of the same way. They have a Marxist analysis, and they develop their strategy for what to do about it from all sorts of sources.

This is an introduction to saying that I have become more of a Marxist since moving to Youngstown. I have seen the organic composition of capital at work when U.S. Steel felt it could make more money by buying another company than by rebuilding its own steel mills. The question of the reserve army of labor is another of these insights of Father Marx that seems to me more and more true as the years go by. That is, Clinton and Reich and [Secretary of Commerce] Ron Brown don’t intend to have full employment. Politicians may run for office promising full employment, but they don’t want full employ­ment. They never wanted full employment—even in the pe­riod of primitive accumulation in England when Marx wrote, or in that same period in the United States seventy-five years later. Today, in the period of decaying imperialist capitalism, it’s almost as if the reserve army of labor becomes the whole world. You could see it in Nicaragua—the greater the influ­ence of the United States over events in Nicaragua, the more kids were out in the street banging on your car windows to sell you Chicklets and shoelaces.

The one thing I’m sure of is we have to stop thinking that someone up there, whether it is the company, or the union, or the Democratic Party, is going to provide jobs. They’re not. Those jobs they provide are going to be part-time, with no benefits, low-wage. Someone should come to Youngstown and find out what people do for a living—see the number of steelworkers who are working in bucket shops without even a pretense of health benefits.

View all posts by Staughton Lynd →

The Truth About the First Thanksgiving
The Triumph of Financial Capital