Dear Reader, we make this and other articles available for free online to serve those unable to afford or access the print edition of Monthly Review. If you read the magazine online and can afford a print subscription, we hope you will consider purchasing one. Please visit the MR store for subscription options. Thank you very much. —Eds.
Notes from the Editors
by The Editors
(Sep 01, 2003)
Topics: Imperialism 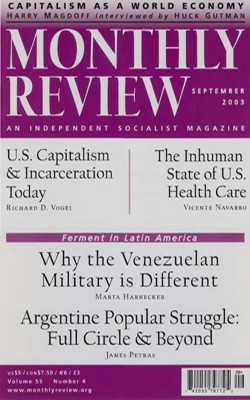 It took only a few months following the official ending of the Iraq War for U.S. imperial designs to unravel almost completely. The Bush administration is now under fire from the intelligence community, the media, and the political elites for having lied its way into the war with its claims regarding Iraqi weapons of mass destruction. More damaging still to administration plans, occupying troops and their Iraqi collaborators are being killed on an almost daily basis in what is now taking on the appearance of a classic guerrilla war. This would be impossible without the support offered to the insurgents by substantial sections of the Iraqi population. Consequently, the United States is being compelled to maintain larger numbers of forces than anticipated in Iraq (often by extending the duration in which military units remain in the country) and the projected term of U.S. military occupation is being drawn out.

What exactly went wrong to thwart Washington’s occupation plans? An answer is provided by Richard Haass, who until June 2003 was deputy director of policy planning in George W. Bush’s State Department and is now president of the prestigious Council on Foreign Relations. In a July 7, 2003 interview conducted by the Council on Foreign Relations, Haass was asked whether prewar planners within the administration anticipated the type of disorder now afflicting occupied Iraq. His response offers a rare glimpse into the mind-set of those currently wielding power:

People [in the administration] underestimated the impact of winning the war so quickly and so discreetly. When you look at other large-scale operations after wars, as in Germany and Japan in 1945, these are occupations that took place among totally defeated societies, which had really borne the brunt of years and years of physical devastation. One of the ironic consequences of fighting the Iraq war so discreetly or surgically is that a lot of the population hadn’t really suffered to any significant degree. As a result, the situation in Iraq was somewhat different from what people had planned for, and the population wasn’t as laid low and wasn’t as accepting of a public foreign presence. For interesting reasons, some of the prewar assumptions just turned out to be wrong.

Haass’ claim that the war on Iraq was “discreet” and “surgical” is exaggerated. But his meaning is crystal clear once the comparison is made with Germany and Japan in the Second World War. Iraq did not suffer anything like the fire bombing of Dresden or the atomic bombing of Hiroshima and Nagasaki, aimed at the virtual annihilation of entire urban populations and the near total destruction of their infrastructure. Consequently, the Iraqi population was not “laid low” in a state of “shock and awe” to the same extent. The assumption here is that the killing of hundreds of thousands, even millions, of people through virtually unlimited warfare over extended periods—and the absolute terror associated with this—is more conducive to a successful occupation, because the subsequent resistance against occupying forces is likely to be far less. Simply put, those planning the occupation of Iraq took as their models occupations following an entirely different war from the one that they were fighting. (They would have been better off remembering the U.S. occupation of the Philippines at the outset of the twentieth century, which led to a guerilla war against occupying forces that inflicted ten times the number of casualties on American troops as the brief Spanish American War that had preceded it, and that generated one of the most brutal repressions—carried out by the United States troops—in all of modern history.)

The comparison with the occupation of Germany and Japan is revealing in another sense as well. Both Germany and Japan were highly industrialized capitalist states, already at the center of the system. The United States, as the new hegemonic power of the capitalist world economy, planned even before the Second World War was over to recreate them as bulwarks against the Soviet Union. Iraq, in contrast, remains a third world state, not a great power in world-economic terms. For the United States the main interest in Iraq is in its oil (since it has the second largest reserves in the world) along with its geopolitical position, which allows the United States more effectively to threaten Iran and to dominate the Middle East as a whole. Although the U.S. plan is to carry out regime change in Iraq there is no plan to develop that country or to elevate it beyond its current position in the world hierarchy of nations. There will be no Marshall Plan for Iraq. Rather Iraq is to be reconstructed as an imperial dependency, primarily under U.S. control. A clear indication of this is to be found in recent U.S. proposals to finance Iraqi reconstruction by mortgaging its future oil production to foreign investors (“U.S. May Tap Oil for Iraqi Loans,” L.A. Times, July 13, 2003).

Little of this is lost on the Iraqi people, who though finally out from under a brutal dictatorship, find themselves occupied by an imperial power determined to dictate their future according to its own ends not theirs. In Haass’ terms, not being “laid low” and having some idea of the future cut out for them, the Iraqi people are not “as accepting of a public foreign presence” as the German and Japanese were before them. Consequently, attacks on U.S. forces are rising.

How does this relate to the growing dissent within elite circles in the United States? Most of the recent revelations on administration misinformation on Iraqi weapons of mass destruction were related to facts sufficiently well known to the intelligence community and the media before the war for them to have raised questions at that time. But as long as the Bush administration was able to construct a juggernaut for war, and as long as the war appeared to be successful, there were no serious criticisms from the intelligence community, the military or the media. Politicians simply held their tongues. Business, seeing potential gains, was supportive. Only when the occupation began to enter a crisis phase because of Iraqi resistance were hard questions increasingly asked by elites suddenly no longer entirely comfortable with the U.S. role.

The key factor in the undermining of administration strategy then is Iraqi national resistance. As long as that continues we can expect the disaster of the U.S. occupation to grow worse month after month even as the casualties mount. And to the extent that this happens questions will inevitably be raised about the reasons for the war itself.

Capitalism as a World Economy: An Interview with Harry Magdoff
Background Notes to Fanshen