Dear Reader, we make this and other articles available for free online to serve those unable to afford or access the print edition of Monthly Review. If you read the magazine online and can afford a print subscription, we hope you will consider purchasing one. Please visit the MR store for subscription options. Thank you very much. —Eds.
Notes from the Editors
by The Editors
(Dec 10, 2010) 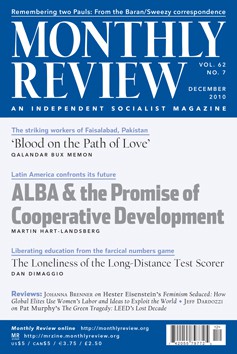 On October 16, MR editor John Bellamy Foster attended a lecture in Eugene, Oregon given by James Hansen, director of NASA’s Goddard Institute for Space Studies. Hansen is the leading U.S. climatologist and the world’s foremost voice for carbon emissions reductions. According to Hansen, we are facing two major tipping points associated with climate change: (1) ice sheet disintegration in Antarctica and Greenland, leading to a massive global sea level rise; and (2) a sudden acceleration in species extinction rates (already 100 to 1,000 times the preindustrial “background rate”), as climate zones begin to move much faster than species can move in response. Matters are further complicated by positive feedback mechanisms such as the rapidly melting Arctic Ocean ice (which reduces the earth’s reflectivity) and the release of methane, a very potent greenhouse gas, from the tundra. Such factors will accelerate global warming.

Empirical indications at present are alarming. The ice sheets of Greenland and Antarctica are losing mass at increasing rates. Glaciers are melting rapidly in mountainous regions. More than half the water in the Ganges and the Brahmaputra comes from melting ice. The result of global warming will be seasonal increases in floods and droughts. In the oceans, coral reefs are threatened, due to the bleaching of the corals and ocean acidification (resulting, like climate change, from excessive carbon emissions). Hansen’s message was clear: the future of the planet will be in many ways determined by what we do “in the next several years.” This, he insists, is not a problem to be left to the next generation, since we “could create a situation out of the control of young people by the time they become adults.”

Hansen was also clear about what needs to be done: wean society from dependence on fossil fuels, and quickly. Fossil fuel production, he argues, is directly subsidized in the market, while its costs to the environment and human health are socialized. It is necessary to alter this and treat carbon dioxide emissions as a pollutant. He sees the chief tool in this respect to be a fee on carbon at the point of production or importation, to be distributed in full as dividends to the population on a per capita basis—so that those with less than average per capita emissions (the vast majority of the population) would receive a net increase in income. In the United States, a carbon fee of $115 per ton of carbon dioxide, which would increase the cost of gasoline by approximately $1 per gallon and the average cost of electricity by about 8 cents per kilowatt-hour, would generate over $600 billion in dividends or $2,000 to $3,000 a year per adult resident. Hansen is completely opposed to letting government have any of this revenue, since the support of the population for such a tax depends on the surety that the revenue would be returned to them on a per capita basis, making it a mere transfer payment.

Carbon trading, the approach promoted in the Kyoto process, is, as Hansen has frequently noted, “worse than nothing,” since it allows emissions to rise appreciably, while giving the false impression that the problem is being addressed. A carbon fee, he argues, “is the only internationally viable approach.” He points to the fact that China—already a leader in alternative energy technology, such as solar panels, wind technology, etc.—is planning to impose such a fee, as among the most hopeful of current developments.

Today coal is the number one enemy of the climate. So-called “clean coal” is nonexistent at present, and unlikely ever to become economically viable. Hansen argues that coal-fired plants need to be closed down, and the building of new ones stopped. As peak crude oil becomes more of a reality, a line has to be drawn to prevent a turn to dirtier fossil fuels: coal, tar sands, shale oil, and gas.

In the United States both the executive and legislative branches have proven themselves unable to resist continual pressure from the vested interests to back away from any effective legislation on climate change. Media corporations have hyped the views of “denialists,” giving those who disavow global warming equal standing in the climate debate—despite their minuscule numbers among scientists, their inability to “stand up against real scientists,” and the fact that their ideas are supported by no scientific body on Earth. The result has been to increase rather than decrease the gap between scientific knowledge and public perceptions. Hansen now hopes that the judiciary will be less subject to external pressures from corporations than the other two branches of government, and that the courts will respond to scientific evidence, protecting the population through a series of injunctions.

Hansen was most heavily questioned by his largely environmentalist audience in relation to his claim that nuclear power would be needed to replace coal in providing base-load electrical power, and that nuclear power (witness France) was safe. Hansen’s point was that continued fossil fuel use means certain catastrophe in the short term and already inflicts enormous environmental and health costs affecting millions of people, while nuclear power is, in comparison, far safer. But much of his audience was clearly not convinced that fourth-generation nuclear power could be part of the answer, or that governments are stable and responsible enough to be trustworthy caretakers in this respect.

Hansen’s main intent in his talk was to issue a call to arms aimed at halting climate change through social change. (He was arrested for the second time recently for engaging in direct action protests against coal mining.) The speaker who preceded him at the podium was Alec Loorz, the fifteen-year-old founder of the youth climate movement, Kids vs. Global Warming, who argued for an “ecological revolution,” to be spearheaded by youth protests throughout the country. Loorz asked individuals, particularly youth, to join his organization and help support the upcoming national iMatter March by going to http://kids-vs-global-warming.com. Hansen applauded Loorz’s stance and urged people to send individually crafted letters to http://MillionLetterMarch.org.

The planetary ecological emergency is not just an issue of natural science, but depends even more today on the development of a critical social-science response. What are the social and economic causes of the crisis, and how can they be alleviated? In this context, we are happy to announce the publication by Monthly Review Press of The Ecological Rift: Capitalism’s War on the Planet by John Bellamy Foster, Brett Clark, and Richard York. Annie Leonard, author and host of The Story of Stuff says, “This book is desperately needed, because it ends any illusion that we can solve our pressing environmental crises with the same system that created them.” Herman Daly, author of Beyond Growth calls The Ecological Rift “an insightful Marxist analysis of the current ecological rift between modern capitalism and the ecosystem…[an] important contribution.” Derrick Jensen, author of Endgame, says that universal “revolts” are needed “if we are to survive” and “this book is a crucial part of that struggle.” Fredric Jameson, author of Valences of the Dialectic, calls it “a basic resource in understanding the incompatibility between capitalism and ecology, and also in arguing for the ecological dimensions of any future socialism.” Those interested in purchasing a copy can do so by visiting MR Press or by calling 1-800-670-9499.

In October, subscribers received a letter from us urging that they consider raising their subscription to the Associate level, or if already an Associate, renewing as a Sustainer. If you put the letter aside, please do pick it up now and become a Monthly Review Associate or Sustainer. Together with you, we want to change how things are going in the world, and if you think what we are doing is useful, we need your help to continue the work.

Monthly Review is asking you to take a minute to answer a short questionnaire on our website. We are considering how to extend our audience, and need you to give us your thoughts and guidance. Please check the homepage in the first two weeks of December and click on the “Readers’ Questionnaire” button, and let us hear from you.