Dear Reader, we make this and other articles available for free online to serve those unable to afford or access the print edition of Monthly Review. If you read the magazine online and can afford a print subscription, we hope you will consider purchasing one. Please visit the MR store for subscription options. Thank you very much. —Eds.
Notes from the Editors
by The Editors
(Jul 01, 2011)
Topics: Education Political Economy 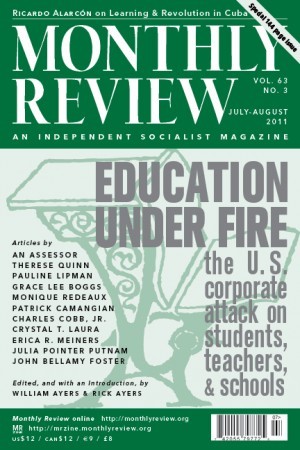 This special issue of MR, “Education Under Fire: The U.S. Corporate Assault on Students, Teachers and Schools,” was edited with the help of education professors, Bill Ayers and Rick Ayers, who provided the inspiration and organization, solicited manuscripts, and wrote the introduction to the issue. One additional article not included in the print version of the magazine: “Inclusive Education, High Stakes Testing, and Capitalist Schooling” by Mara Sapon-Shevin, will appear on our Web page, https://monthlyreview.org, as part of this issue. While another article, “Khalil Gibran International Academy: A Story of Capitulation by Public Officials to Bigotry and Racism and the Campaign of Resistance that Followed,” by Debbie Almontaser and Donna Nevel, also part of this special issue, will appear in print in the September MR.

For MR this [special issue] represents only a starting point and we hope to continue to address the education question in future issues—not only in relation to the United States but also globally. Except for the crucial, concluding essay on Cuban education, provided by Ricardo Alarcón (President of Cuba’s National Assembly of Peoples’ Power), which points to what can be achieved in the realm of education once the barriers represented by capitalist society are removed, all of the articles in this special issue are concerned with the changing context of schooling in the United States. This is not meant, however, to ignore the rest of the world, but to constitute a warning of what may be in the offing for much of the global population—since the United States is the fountainhead of neoliberal policy. Indeed, the fact that the privatization of public education in the United States already has a global counterpart was forcibly impressed on MR editor, John Bellamy Foster, during a recent trip to Brazil. His article for this issue, “Education and the Structural Crisis of Capital,” is based on his opening presentation to the Fifth Brazilian Conference on Education and Marxism in Florianópolis, Santa Catarina, April 11, 2011. This conference was attended by 1,200 education students, school teachers, and education professors all concerned with promoting critical education from a Marxist perspective—and all of whom were undoubtedly inspired by the example of Brazil’s world-famous philosopher of pedagogy, Paulo Freire. Young teachers, teachers in training, and education researchers crowded around John following his talk, each insisting that a similar corporate-led assault on the schools to what he had described was arising in Brazil, seeded by private foundations. A resistance movement was developing among radical teachers to combat this. It is clear from this, that education is under fire within much of global capitalist society. Rather than a revolution of pedagogy from below along Freire’s lines, as part of a general transformation of society, what we are seeing is the exact opposite—the marketization and privatization of education from above. Yet, the global struggle in this area is only just beginning and remains undetermined. The final outcome will depend to a considerable degree on the actions we take now.

Educators reading this issue of MR, and others concerned with radical educational change, will be interested in the 2011-2012 edition of Planning to Change the World: A Plan Book for Social Justice Teachers, edited by Tara Mack and Bree Picower, and published by the New York Collective of Radical Educators (NYCORE) and the Education for Liberation Network, with the cooperation of Rethinking Schools (http://justiceplanbook.com). These are three of the most important radical education groups at work today, addressing elementary and secondary schooling.

For an integrated approach to radical change in the U.S. context in which educational transformation plays a central part, we strongly recommend Grace Lee Boggs’s new book, The Next American Revolution: Sustainable Activism for the Twenty-First Century (University of California Press, 2011), http://ucpress.edu. Grace, who has just turned 96 (on June 27), starts off her new book with a chapter on “These Are Times to Grow Our Souls” and ends with a chapter entitled “We Are the Leaders We’ve Been Looking For.” “We need,” she writes, “to view our role as American revolutionaries” (175). This book carries on in terms appropriate to our time the argument first developed by James and Grace Lee Boggs in their important work, Revolution and Evolution in the Twentieth Century (Monthly Review Press, 1974). Happy Birthday, Grace!

Education Under Fire: Introduction
Environmental Justice and the Criminalizing of Dissent