Dear Reader, we make this and other articles available for free online to serve those unable to afford or access the print edition of Monthly Review. If you read the magazine online and can afford a print subscription, we hope you will consider purchasing one. Please visit the MR store for subscription options. Thank you very much. —Eds.
by John Bellamy Foster
(Jul 01, 2011)
Topics: Education Incarceration Inequality Political Economy Stagnation

As the articles in this section indicate, the new corporate schooling in the United States combines many of the worst aspects of capitalist schooling in a period of economic stagnation, financialization, and militarization/securitization together with a strategy of privatization of the schools. Public education is being degraded, regimented, and increasingly racially segregated—while the resulting worsening conditions in the schools are used to justify the restructuring of the entire education system.

Viewed in this context, the rapid expansion of testing, as described by An Assessor, is to be understood mainly as a Trojan Horse for the restructuring of education—designed to exert increased control over both teachers and students, and to push the whole system in the direction of privatization. Under the new testing regime, students not only have to take the federally mandated tests under No Child Left Behind; they are also compelled to undergo a constant stream of test-preparation and testing: including growing use of state benchmark tests, occurring three or more times a year, plus more frequent test “probes.” Teachers are being encouraged to “teach to the test” with curriculum materials being provided by the private sector, often by the same firms that design the tests themselves, and intended to subordinate the process of learning to assessment. All areas of the school curriculum not directly related to this system of “value-added assessment” are being dropped, and teachers are increasingly mandated simply to follow the prescribed curriculum-testing program. Any use of their own judgment or teaching skills is more and more discouraged.

All of this is connected to the system’s growing need for a laboring population that is highly regimented, with only a relatively few students being tracked into more quality schooling. Traditionally, capitalist societies have seen education largely in functionalist terms, as meant to fit students for future occupations. Today this has to do with fitting many of them (particularly in the case of inner-city kids) not for work as such, but for a life of military-style discipline or incarceration. Although in 2000—see Chart 1 below—U.S. national defense spending was 5 percent less than expenditure on elementary and secondary education, by the end of the decade national defense exceeded K-12 by more than 25 percent ($771.6 billion for the former as compared to $613.1 billion for the latter). At the same time, the military has assumed a growing role in schools, as Erica Meiners and Therese Quinn explain in their analysis of Junior Reserve Officers’ Training Corps (JROTC) programs in high schools. 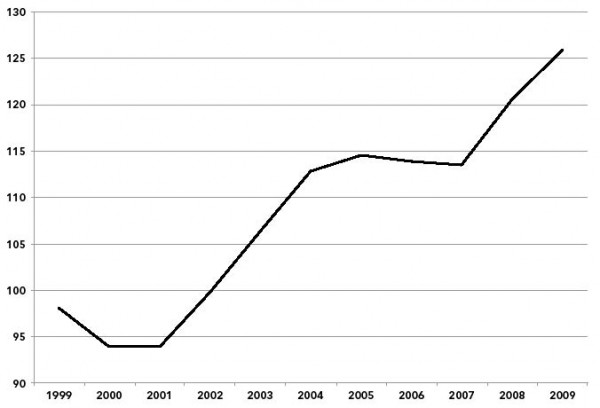 The massive shift in social priorities toward national security, homeland security, and domestic security is also reflected in the rapid increase in penal state expenditures (or public safety spending) as a share of elementary and secondary education, rising from around 30 percent in 1959 to over 50 percent in 2009, as shown in Chart 2, below. As Meiners and Quinn and Crystal Laura argue in their articles, racialized school-to-military and school-to-prison pipelines are expanding in the United States, hand in hand with the corporate shift to charterization and privatization. For Laura, the trauma experienced by young black males in schools, as well as in the social conditions they encounter in general, is a mark of the extreme, apartheid character of U.S. society. 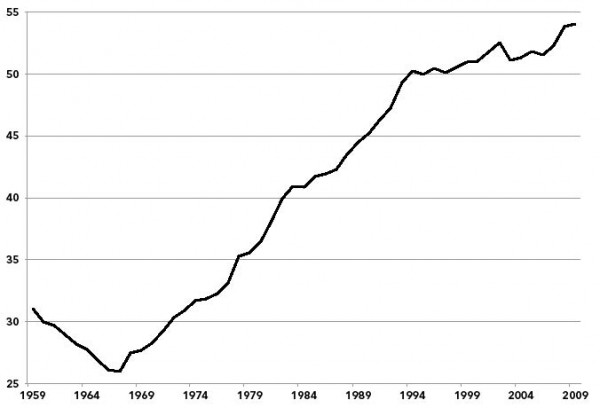 The new corporate schooling deliberately skirts fundamental issues of class and race, choosing instead to promote a “no excuses” and “demography is not destiny” philosophy that downplays the role of child poverty, inequality, and institutional racism. Nevertheless, it has chosen to incorporate class and race issues in the form of a recycled “culture of poverty” perspective that blames the poor for their culture of poverty, and suggests that if they want to get ahead, they must abandon the culture of poverty for the culture of prosperity (defined as white and middle class). Monique Redeaux, in the final article in this part, addresses the oppressive nature of this philosophy, as exemplified by the work of American Enterprise Institute speaker Ruby Payne, whose multimillion-dollar business selling books and running workshops in the schools on how to overcome the alleged deficit thinking of the poor, has made her the most successful contemporary purveyor of the culture of poverty perspective. As analysts Randy Bomer and his colleagues explained in a study of Payne’s work (“Miseducating Teachers About the Poor,” The Teachers College Record, December 2008): “Nowhere in her book [A Framework for Understanding Poverty] does Payne state that poverty, rather than the poor, is the problem.”2 For Redeaux, Payne’s work “is rooted in the same discourse that has been used to exclude and brutalize people of color for centuries.”

Testing, Privatization, and the Future of Public Schooling
Another Education Is Happening