Dear Reader, we make this and other articles available for free online to serve those unable to afford or access the print edition of Monthly Review. If you read the magazine online and can afford a print subscription, we hope you will consider purchasing one. Please visit the MR store for subscription options. Thank you very much. —Eds.
Notes from the Editors
by The Editors
(Mar 01, 2012)
Topics: Economic Theory Political Economy Stagnation 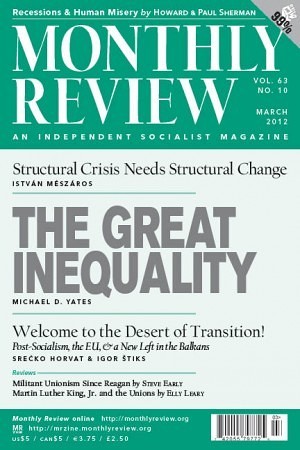 As we write this, in late January 2012, international representatives of the ruling class and its power elite—wealthy investors, corporate executives, politicians, state bureaucrats, economists, pundits, and sundry celebrities—are gathered at the World Economic Forum in Davos, Switzerland to discuss the state of the world. Today there is no disguising the fact that some five years since the Great Financial Crisis began, the United States, Europe, and Japan all remain caught in an economic slump that will not go away. Christine Lagarde, managing director of the IMF, set the tone in a talk delivered to the German Council for Foreign Affairs, on January 23, two days before the Davos conference, declaring that the task at present is “avoiding a 1930s moment”—that is, another prolonged economic stagnation as in the Great Depression years. Indeed, such an economic malaise is already upon us. As Huffington Post Business Editor Peter Goodman wrote on January 25, with “Europe, the United States, and Japan…mired in stagnation,” the primary issue is to find a way to “spare the globe a synchronized economic downturn.” Billionaire George Soros, likewise, has been warning in Davos of the threat of “stagnation,” constituting conditions, as he told Newsweek (January 30, 2012), “comparable in many ways to the 1930s, the Great Depression.”

From MR’s standpoint, the current stagnation is not at all unexpected but represents the normal tendency of global monopoly-finance capital, especially in the mature economies. This tendency was disguised in part during the last three decades or more by a series of financial bubbles (and before that by Cold War military spending). Now with financialization on the rocks capitalism is once again face-to-face with the specter of stagnation, with no visible way out.

The Review of the Month (ROM) in the May 2011 issue of MR, entitled “On the Laws of Motion of Capitalism,” dealt with the legendary Sweezy-Schumpeter debate at Harvard in 1947, focusing on the discovery of Sweezy’s notes for the opening sally in the debate (published as part of the ROM). At the time the ROM was written by John Bellamy Foster, the actual date of the debate was unknown, seemingly lost in the mists of time, despite a number of first-hand accounts of the debate itself. Since then a Harvard Crimson article on the debate (“Schumpeter Sees Peaceful Socialist Spread as Sweezy Remains Skeptical,” March 28, 1947) was located that set the date on which it took place as March 27, 1947. According to this short report, Schumpeter combined his criticism of New Deal or labor capitalism with a prediction, undoubtedly based on the Kondratieff long cycle, which claimed that the economy would eventually experience a secular rise peaking in the late 1980s. (For Schumpeter this was at the same time a tragedy since it marked the final demise of entrepreneurial capitalism.) Sweezy countered that monopoly capitalism in the post-Second World War period would likely succumb to stagnation without external stimuli, especially “the outside shot in the arm of a war.” Sweezy, who was a very popular figure at Harvard at the time, was making his first public appearances there that week since resigning his position as assistant professor of economics at Harvard. He had previously given a talk on March 24, 1947 to the John Reed Society at Harvard, entitled “A Critique of Keynesian Economics” (“Reed Society to Hear Sweezy Talk Tonight,” Harvard Crimson, March 24, 1947). For Sweezy, Keynes raised the question of stagnation, but was unable to provide an answer, since this required going beyond capitalism itself—a dilemma that confronts us even more sharply today.

On January 20, BillMoyers.com posted “Bill’s Must-Read Money & Politics Book List”. We were pleasantly surprised to discover that The Great Financial Crisis: Causes and Consequences (Monthly Review Press, 2009) by John Bellamy Foster and Fred Magdoff was at the very top of the list of ten books. (Earlier, in March 2009, Moyers had written of The Great Financial Crisis: “With all the charges of ‘socialist’ hurled at Barack Obama from the howling back benches, I decided it was time to find out what some real socialists are saying about the crisis of monopoly capitalism. It’s a short book long on insight.” “Bill Moyers Booklist,” March 10, 2009, http://www.pbs.org/moyers/journal/blog/2009/03/bill_moyers_booklist.html.) The other nine books on “Bill’s Must-Read Money & Politics Book List,” in descending order, were: Corporations Are Not People by Jeffrey D. Clements; Winner-Take-All-Politics by Jacob S. Hacker and Paul Pierson; This Changed Everything: Occupy Wall Street and the 99% Movement by Sarah van Gelder and the staff of Yes! Magazine; The Age of Austerity by Thomas Byrne Edsall; A Failure of Capitalism by Richard A. Posner; The Age of Greed by Jeff Madrick; The Shock Doctrine by Naomi Klein; Democracy Inc. by Sheldon Wolin; and Throw Them All Out by Peter Schweizer.

Hannah Holleman, who is the coauthor of three ROMs in MR—“The U.S. Imperial Triangle and Military Spending” (October 2008), “The Sales Effort and Monopoly Capital” (April 2009), and “The Financial Power Elite” (May 2010)—has accepted a position as an assistant professor of sociology at Amherst College in Amherst, Massachusetts. Congratulations Hannah!

Lucille Scofield, who died December 27, 2011, aged 89, was MR’s bookkeeper from October 1975 to December 2000 when she “retired.” But, committed both to radical change and to this magazine, she stayed on as an occasional volunteer. Lucille brought both indispensable humor and intelligence to MR. She was an important member of our family and will be missed.

The Great Inequality
Fredric Jameson on the Reserve Army